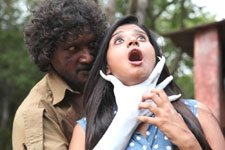 Ravi Kandala / fullhyd.com
EDITOR RATING
1.0
Performances
Script
Music/Soundtrack
Visuals
1.0
1.0
1.0
1.0
Suggestions
Can watch again
No
Good for kids
No
Good for dates
No
Wait to rent it
No
Looking at the song that played while the titles of Ice Cream 2 rolled in the beginning of the film, we got a nagging suspicion that we'd walked into the screening of some softcore movie - the kind that made Lamba the theatre it was. The song shows a girl giving random orgasmic expressions mouthing something while some other song played in the background.

She gives the aforesaid expressions in her bed first, then out in the open in something resembling a forest, and then in a bathroom under a shower. All this while, the names of the crew of the film keep appearing in between a pair of lips at the bottom of the screen. The final shot shows a pair of lips with a red chilli between them and the director's name - Ram Gopal Varma - on it. It required that shot to tell us that we'd not walked into the wrong theatre and we were indeed there to watch Ice Cream 2.

The plot of Ice Cream 2 is as non-existent as that of its predecessor, Ice Cream. This movie shows a group of friends, seven of them, who want to star in and direct a movie. They meet a producer (played by Ram Gopal Varma's palms and voice), who offers to buy the story but refuses to let them have any part in it. They refuse and decide to shoot a short film to showcase their talent so that the producer will give them an opportunity.

The crew head out to a deserted chemical factory to shoot the film. They keep hearing strange noises all around and are scared to death. They are then taken hostage by a gang of thieves who've taken shelter in the factory after robbing a bank. The gang has five members including J D Chakravarthy in weird make-up and with irritating mannerisms.

The rest of the movie is about how 10 of the 12 characters (the 7 friends and the 5 thieves) are all murdered one by one. The second half of the film is simply about waiting to see which character will be killed next and how. The why is explained in a single scene towards the end, and is as unconvincing as the rest of the movie.

There is very little to talk about the technical or other values of Ice Cream. The film runs for less than 100 minutes, and still feels stretched beyond belief. The dialogues are inane - the crew hear strange sounds, and convince themselves that they are being emitted by a buffalo that has a cold - we are not making this up.

The flowcam technology that Varma keeps harping about is perhaps good for those who understand the nitty-gritty. For laymen like us, it feels like the film was shot using a handheld digital camera - that is the kind of quality there is. The background music is absolute noise - there are loud noises dumped onto every scene, and the only ones they manage to scare are the actors in the movie.

The acting is either amateur stuff or irritating stuff. If JD was playing this character to clear a debt to his mentor, we hope he's paid it off in full and that he'll never have anything to do with Varma again.

Ice Cream 2, then, is as bad as its predecessor. We're scared of writing this - when Ice Cream was released and got terrible reviews, Varma announced that he would make a sequel. Now that Ice Cream 2 is garnering worse reviews, will he torture us with more sequels?
Share. Save. Connect.
Tweet
ICE CREAM 2 SNAPSHOT 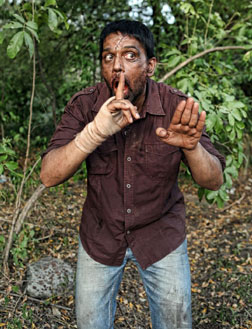 ADVERTISEMENT
This page was tagged for
ice cream 2 telugu cinema review
Ice Cream 2 telugu movie
Ice Cream 2 reviews
release date
J D Chakravarthy, Tanikella Bharani
Follow @fullhyderabad
Follow fullhyd.com on
About Hyderabad
The Hyderabad Community
Improve fullhyd.com
More
Our Other Local Guides
Our other sites
© Copyright 1999-2009 LRR Technologies (Hyderabad), Pvt Ltd. All rights reserved. fullhyd, fullhyderabad, Welcome To The Neighbourhood are trademarks of LRR Technologies (Hyderabad) Pvt Ltd. The textual, graphic, audio and audiovisual material in this site is protected by copyright law. You may not copy, distribute, or use this material except as necessary for your personal, non-commercial use. Any trademarks are the properties of their respective owners. More on Hyderabad, India. Jobs in Hyderabad.