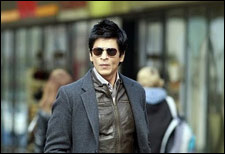 Samrat Sharma / fullhyd.com
EDITOR RATING
7.0
Performances
Script
Music/Soundtrack
Visuals
7.0
6.0
6.0
8.0
Suggestions
Can watch again
No
Good for kids
No
Good for dates
Yes
Wait for OTT
Yes
Don 2 is a much better film than the first time Farhan Akhtar and Shahrukh Khan tried to tackle this character in 2006. The action is crisper, the editing is smoother and the direction that much more skillful.

Unburdened with the expectations of making a remake of a beloved film, they craft their own experience and do a convincing job creating a successful action film.

Despite the very clearly superb production values (courtesy a huge tourism tax sop from the various countries they shot it in, no doubt), the film never really matches the audacity of imagination that led to a mid-air parachute snatching in the first film. This is a much more restrained Don - both in the by-the-numbers action, and in the reduction of the cackling evil of the first character to a more calculated bad guy this time around.

Shahrukh Khan is his manic self; of course, delivering an over-the-top performance that would grate except for the fact that it was way worse in the first film. When the action starts in a small Thai village where he grunts, growls and shouts his way through a gun fight, he is still channeling the madness.

By the time we move from Malaysia to Switzerland to Germany, he has taken to chewing the scenery like a cow to cud. It's entirely his charisma that saves the performance from drowning in itself.

In prison in Malaysia (Don surrenders, but it is all part of a "plan"), he meets old pal Vardhan (Boman Irani), and they both escape to Switzerland and then to Germany to affect a bank heist. Hot on their heels are the Interpol's Roma (Priyanka Chopra), her boss Malik (Om Puri), and the worst sidekick in the world. Along for the ride is Lara Dutta's incredible smile and Kunal Kapoor's hat that hacks.

To say that the characters are wafer-thin is to halve the thickness of wafers. Facial tics and dour expressions pass for characters, and not one goes through any kind of emotional or physical journey. They all show up in Germany, try to harass poor Aly Khan, and hope the next action scene detracts from the lack of any sense of plot or script.

And what action it is - clearly a lot of thought has gone into making it convincing, and with heft. The hand-to-hand combat is finely honed, and feels visceral, while the overall set-pieces feel kinetic and suitably entertaining. Farhan Akhtar is a much surer of a hand at mounting these sequences, and his incredible use of camera and music attests to that.

It all comes together, but unravels also, in the end. The action is great for the last few sequences, but the multiple endings and the plot that goes nowhere also make the film extremely boring to sit through. There is a limit to how much charisma can sustain, and the empty husk of a plot simply gives up at the end. It's sad that so much effort went in to making a well-produced film, and none whatsoever in the script.

Don 2 is not a bad film, though it isn't a great film either. Enjoy it for the nonsensical madness, and don't expect an emotional or logical core or any sense of storytelling, and you'll be fine.
Share. Save. Connect.
Tweet
DON 2 SNAPSHOT

ADVERTISEMENT
This page was tagged for
don 2 full hindi movie sahrukhan
hyderabad two dons movie
Don 2 hindi movie
Don 2 reviews
release date
Follow @fullhyderabad
Follow fullhyd.com on
About Hyderabad
The Hyderabad Community
Improve fullhyd.com
More
Our Other Local Guides
Our other sites
© Copyright 1999-2009 LRR Technologies (Hyderabad), Pvt Ltd. All rights reserved. fullhyd, fullhyderabad, Welcome To The Neighbourhood are trademarks of LRR Technologies (Hyderabad) Pvt Ltd. The textual, graphic, audio and audiovisual material in this site is protected by copyright law. You may not copy, distribute, or use this material except as necessary for your personal, non-commercial use. Any trademarks are the properties of their respective owners. More on Hyderabad, India. Jobs in Hyderabad.