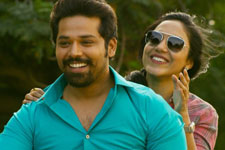 After being disgusted by such movies for quite a while now, seeing a young rom-com where the youngsters behave like the youngsters of today and have common names like Prashanth and Chitra, come from normal families that live in two-bedroom apartments, and have parents who have minimal means and ambitions and have decent conversations with their children can be considered a blessing. And Pellichoopulu is one such blessing.

Pellichoopulu stars the uber-natural Vijay Devarakonda (remember the Doodhkasi guy from Yevade Subramanyam) as Prashanth and Ritu Varma as Chitra. Vijay gets his engineering degree after multiple attempts and wants to become a chef. When he realizes that involves hard work, he decides to get agree to the first match that his dad brings in as it comes with a hefty dowry. Chitra wants to go to Australia for higher studies but wants to fund herself. She plans to set up a food truck business, earn money and then fly off.

Prashanth's and Chitra's paths cross during their pellichoopulu (a matchmaking function), and how the two then go on to set up a business and find themselves and each other in the process forms the remaining part of Pellichoopulu. There is a slight flavor of Band Baaja Baaraat in there with the whole start-up gig, reckless guy and responsible girl bit, but the similarities end there. New director Tarun Bhasker sets up the plot nicely in the flashback format, and the twist at the interval is plain delicious. The laughs in the first half are plentiful, and you may find yourself wiping off tears from your eyes most of the time.

The second half has some nice emotional moments that are underplayed very well. Some clichéd scenes like the return of the ditcher boyfriend are also handled in a mature and very "today" manner. There are no songs as such to mar the flow of the film - a few numbers play out in the background and are easy on the ears.

The cinematography needs a special mention - the visuals are mostly indoors in small flats and houses, and are captured nicely without creating fatigue in you. The only nitpicking that you might feel like doing is that the able supporting cast is slightly sidelined in the second half and the comedy quotient dips significantly. Thankfully though, the clichés are kept to a minimum.

The performances are all very natural. Prashanth's friend - the guy with the Telangana accent - is brilliant. Ritu Varma and Vijay carry the film on their shoulders and deserve applause for not over-acting.

Pellichoopulu is a must-watch. More power to the Tarun Bhaskers of the world - we're looking forward to what he'll make next!
Share. Save. Connect.
Tweet
PELLICHOOPULU SNAPSHOT 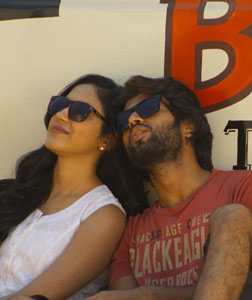 See Pellichoopulu full details
PELLICHOOPULU USER REVIEWS
1 - 5 OF 5 COMMENTS
POSITIVE  |  NEGATIVE |  NEWEST  |  OLDEST  |  MOST HELPFUL  |  LEAST HELPFUL
Bakra BA on 2nd Sep 2016, 8:06pm | Permalink
pilli choopulu is not a very good movie. Sugar patients avoid watching this
Aswattha on 22nd Aug 2016, 1:35pm | Permalink
After many people suggested that this movie is a must watch, I watched it yesterday. As happens sometimes my expectations let me down.

First half of the movie is good. Second half minus Priyadarshi who plays kaushik is terrible. Priyadarshi is the only reason for me to watch second half.

Feel good factor and some inexplicable necessity to have a ultra sweet ending takes over the movie in second half and a good for nothing, lazy, booze lover becomes a super successful business man in one month ( yes it takes that much time only to clean up ones act, become a good chef and also a successful businessman).

Overall a good attempt and if the movie is one of those leave your brains at home type movie I probably wouldn't have been so disappointed.

ADVERTISEMENT
This page was tagged for
Pellichoopulu telugu movie
Pellichoopulu reviews
release date
Vijay Deverakonda, Ritu Varma
theatres list
Follow @fullhyderabad
Follow fullhyd.com on
About Hyderabad
The Hyderabad Community
Improve fullhyd.com
More
Our Other Local Guides
Our other sites
© Copyright 1999-2009 LRR Technologies (Hyderabad), Pvt Ltd. All rights reserved. fullhyd, fullhyderabad, Welcome To The Neighbourhood are trademarks of LRR Technologies (Hyderabad) Pvt Ltd. The textual, graphic, audio and audiovisual material in this site is protected by copyright law. You may not copy, distribute, or use this material except as necessary for your personal, non-commercial use. Any trademarks are the properties of their respective owners. More on Hyderabad, India. Jobs in Hyderabad.