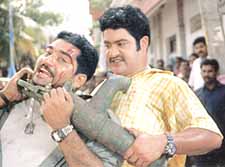 Manju Latha Kalanidhi / fullhyd.com
EDITOR RATING
6.0
Performances
Script
Music/Soundtrack
Visuals
NA
NA
NA
NA
Suggestions
Can watch again
NA
Good for kids
NA
Good for dates
NA
Wait to rent it
NA
Watching Naaga is like having your typical meal at home. You know the fare and the taste, and you've been through the experience since you've started uttering doo-dah. Yet, you never get bored of it. Naaga is like a lavish yet routine Andhra meal with the right amount of spice, zing, color and flavor. Predictable, yet palatable.

From political drama to family sentiment, raunchy dialogues to killer one-liners plus an item number by Ramba, Naaga has everything. Except perhaps at least 10-inch clothes for the poor anorexia-inspiring imports from Mumbai.

Naaga is an aspiring lawyer and a Law school undergrad who gets sucked into the political vortex unwittingly. An accidental tiff with political thugs and a rabblerousing defence in the court later, he is made the leader of the Student's Union.

If you can digest it, his suggestions in the court - about how political parties should use only the broadcast media for canvassing and spare the public from their cacophony - are sent to the Election Commission. If possible, they would also be included in the Constitution. It's Naaga you silly, and NTR to boot. So kuch bhi ho sakta hai.

One thing leads to another and he manages to impress Chief Minister Chandrasekhara Naidu. (no connection to Chandrababu Naidu, you one-track mind!). CM garu realises the dude's potential and he is made the youth wing leader of the ruling party.

From there, Naaga reaches a point of no return. Despite his best attempts to stay out of the political maneuverings, he becomes a pawn in the political drama. So much that a nod from Naaga can create mayhem in the State and an assurance can restore law and order.

As he gets busy with his political aspirations, not only are his dreams of becoming a lawyer buried, his Dad who dreams about it too is buried. Naaga is blamed for his Dad's death, and that's when he realises he has to wriggle out of this unholy political mess.

Hell hath no fury as NTR Jr scorned. So the rest is about the mayhem one superhuman, ultra-smart, mega-gallant Naaga can create in the political scenario.

Paruchuri Brothers once again shoot their political witticisms left, right and center. And NTR Jr mouths them with the same ease as his granddad did a decade ago. Rashtram kosam chavadam lo rajasam undhi, says NTR Jr. Ok dude, we get the drift. You are CM waiting in the wings.

Despite his average looks and physique, NTR Jr has the gift of the gab, and that's what saves the day. He is nicknamed Sunnunda in the movie, and that's supposed to be telling us all he knows how he looks. On the whole, he cobbles the movie together and puts up a terrific show.

Sada and Jennifer have a battle over who gets a better deal, and Sada wins hands down: Jennifer gets two songs, but Sada gets two songs plus two scenes. And we also have an all-new improved Ramba (with 50 per cent less fat) doing an item song.

The most amusing role goes to Paruchuri (the younger one) who lets out the dirty secrets of politics in his own inimitable style. Raghuvaran as Naaga's Dad has a major role too, but like always fathers are boring, and this one's no exception. Suneel and party have the usual gags.

NTR Jr has been there, donned that. And as Telugu audiences we've seen there and done that. But who cares? Let's do it all over again!
Share. Save. Connect.
Tweet
NAAGA SNAPSHOT

ADVERTISEMENT
This page was tagged for
Naaga telugu movie
Naaga reviews
release date
NTR Jr, Sada
theatres list
Follow @fullhyderabad
Follow fullhyd.com on
About Hyderabad
The Hyderabad Community
Improve fullhyd.com
More
Our Other Local Guides
Our other sites
© Copyright 1999-2009 LRR Technologies (Hyderabad), Pvt Ltd. All rights reserved. fullhyd, fullhyderabad, Welcome To The Neighbourhood are trademarks of LRR Technologies (Hyderabad) Pvt Ltd. The textual, graphic, audio and audiovisual material in this site is protected by copyright law. You may not copy, distribute, or use this material except as necessary for your personal, non-commercial use. Any trademarks are the properties of their respective owners. More on Hyderabad, India. Jobs in Hyderabad.