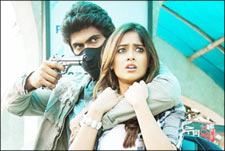 Deepa Garimella / fullhyd.com
EDITOR RATING
4.0
Performances
Script
Music/Soundtrack
Visuals
7.5
3.0
6.5
8.5
Suggestions
Can watch again
No
Good for kids
No
Good for dates
No
Wait for OTT
Yes
Thank you for watching the movie, say the end credits. You're welcome, Puri Jagannadh. Although we didn't really get it. Nenu Naa Rakshasi is film so consumed by gloss that it misses the point. Actually, most points it tries to make.

Is it an attempt to sensitize audiences about the pain behind suicide? Is it a thriller tailor-made to capitalize on the well-marketed hunk-ness that is Daggubati Junior Junior? Is it about the romance between what looks like one of the sexiest on-screen alpha couples ever? Is it a Puri Jagannadh experiment in edgier cinema?

As for the story, Rana Daggubati plays this completely chilled-out hitman who falls in love with a woman Meenakshi (Ileana) with a morbid but well-meaning hobby - she shoots videos of suicides. Distressed people who plan their suicides contact her so she can capture them talking about their grievances while they go about killing themselves, and these dying moments are put up on Youtube. These videos never get reported to Youtube, by the way.

Well, morbid social service aside, Nenu Naa Rakshasi does have a heart. Clearly, Puri Jagannadh wants to talk about suicide with the sensitivity that it deserves, and tell people that it is absurd to think of suicide as a crime or to morally judge about a person in great agony who wants to end his life because he has nothing left to live for.

What doesn't click is the disjointedness. Beneath all the gleam and glint (and behind Ileana's repetitive catwalk), this is actually a standard masala thriller - with a highly predictable plot. Slickness and cliched - that translates to a zillion slo-mo shots shot in fine detail and rhythm, that all look great but the sum total of which delivers more yawns than thrills.

Logic is mauled in some places. Abhi's far-fetched flashback (he used to be a talented shooter who qualified for the Olympic, but who got blackmailed into this profession) is as preposterous as the police's inability to nab Meenakshi for months. And the romance consists of lines like "Nannu preminchi chaavave!!!" (this to a woman who's already not too kicked about life).

The comedy wilts as well. For example, we lost the joke in the scene where Meenakshi weeps and continues to shoot away with her handycam as her "client" (who has just changed his mind about dying after having stabbed himself) begs for an ambulance. It's funny for a couple of seconds, but beyond that, the joke's just being stretched.

But then, NNR is pleasing to the eye, thanks to Puri Jagannadh's knack for stunning cinematography, and of course to the hot couple on screen. And yes, Rana can act. Bad dubbing mars things a bit, but the star-kid might do pretty well in the industry - by his own merit - if he sticks to good filmmakers.

Ileana grouches her way through the flick, Subbaraju does well in the ample airtime he's given, and the villains are as creepy as always. However, what was with that terrible, terrible comedy track featuring Ali and Mumaith Khan?

Vishwa and Rahman belt out a slick Paditinammo, but the other songs neither sound great nor contribute to the movie.

Well, in all, that would be a no. Skip this one.
Share. Save. Connect.
Tweet
NENU NAA RAKSHASI SNAPSHOT

ADVERTISEMENT
This page was tagged for
Nenu Naa Rakshasi telugu movie
Nenu Naa Rakshasi reviews
release date
Rana, Ileana
theatres list
Follow @fullhyderabad
Follow fullhyd.com on
About Hyderabad
The Hyderabad Community
Improve fullhyd.com
More
Our Other Local Guides
Our other sites
© Copyright 1999-2009 LRR Technologies (Hyderabad), Pvt Ltd. All rights reserved. fullhyd, fullhyderabad, Welcome To The Neighbourhood are trademarks of LRR Technologies (Hyderabad) Pvt Ltd. The textual, graphic, audio and audiovisual material in this site is protected by copyright law. You may not copy, distribute, or use this material except as necessary for your personal, non-commercial use. Any trademarks are the properties of their respective owners. More on Hyderabad, India. Jobs in Hyderabad.