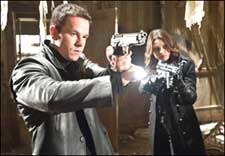 Samrat Sharma / fullhyd.com
EDITOR RATING
2.0
Performances
Script
Music/Soundtrack
Visuals
1.5
2.5
4.0
5.0
Suggestions
Can watch again
No
Good for kids
No
Good for dates
No
Wait to rent it
Yes
As a huge fan of the video-game, I have to admit, I went into Max Payne with not a little amount of hope. Hope that Hollywood finally gets it right; hope that they make a film that does not suck as much as all the other video-game adaptations have.

Dash it all - I would have easily settled for a Hitman-like stupid film that at least entertained. That was not to be - Max Payne is maximum pain on your senses, and despite gunfights straight out of the game, which are in turn homage to the Hard Boiled school of John Woo cinema, and despite some sexy co-stars, the film is a dud the moment the first bullet is fired.

I don't want to recap the sorry state of affairs they call a script here, so suffice it to say that it's all about Mark Wahlberg as a gun toting supercop, who thinks only of revenge after his family is massacred. Obsessing over his investigation, he is led into the seedy underworld of the drug mafia, and things go south quickly.

The problem is that the script stays quite close to the story told in Max Payne and Max Payne 2 - which is the worst thing that you could do. It was a great game that punctuated an awesome action dynamic with some nice characterization and a story that dipped in and out as you played. Homer's Odyssey, it was not.

The film takes that template and runs with it, making it a stupid action film with noir aspirations and hollow characters. Be it Ludacris or Chris O'Donnell, the film scrapes the absolute bottom of the barrel for its supporting star cast, and with the exception of Beau Bridges, no one seems to be giving a fart about what is happening.

That being said, the cast is still something you can make a real movie out of. Some familiar faces, some sexy babes (Mila Kunis, and new Bond-babe Kurylenko), and TV talent that still can carry something off. The fact is that the script gives them nothing to do, and when it does they just stare back in disbelief.

Mark Wahlberg's stars again as a piece of wood, and looks surprisingly constipated throughout the film. I know that the main character in the video-game was wooden as well, but that was because the technology limited the makers from actually animating the face. Wahlberg takes that as a cue and acts similarly. Poopy faces galore, is all I am sayin'.

To top that, for an 'action' film, the action is rank unwatchable. Ridiculous gunfights shot in a way that are uninteresting and confusingly bad at the same time pockmark the sketchy setups, and once in a while we get absolutely ludicrous shots of Marky Mark running down glass corridors with guns ablaze. It's so unwatchable that I saw people leave in the middle of a gunfight. In the middle of a gunfight!

I don't know if I am convincing enough in my slamdown of the film, but please, spend your money on something worthwhile. If recent events have affected you as much as everyone else, you will come out of this one nauseated.
Share. Save. Connect.
Tweet
MAX PAYNE SNAPSHOT

ADVERTISEMENT
This page was tagged for
Max Payne english movie
Max Payne reviews
release date
theatres list
Follow @fullhyderabad
Follow fullhyd.com on
About Hyderabad
The Hyderabad Community
Improve fullhyd.com
More
Our Other Local Guides
Our other sites
© Copyright 1999-2009 LRR Technologies (Hyderabad), Pvt Ltd. All rights reserved. fullhyd, fullhyderabad, Welcome To The Neighbourhood are trademarks of LRR Technologies (Hyderabad) Pvt Ltd. The textual, graphic, audio and audiovisual material in this site is protected by copyright law. You may not copy, distribute, or use this material except as necessary for your personal, non-commercial use. Any trademarks are the properties of their respective owners. More on Hyderabad, India. Jobs in Hyderabad.