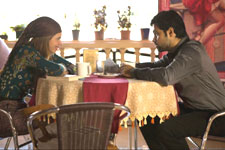 Nupur Barua / fullhyd.com
EDITOR RATING
7.0
Performances
Script
Music/Soundtrack
Visuals
6.0
4.0
5.0
8.0
Suggestions
Can watch again
Yes
Good for kids
No
Good for dates
Yes
Wait for OTT
No
Ekta Kapoor is not an easy person to work with, it is said. Ditto for Vishal Bharadwaj. Both have a firm footing in the film industry as formidable forces - pioneers, even, in daring to push boundaries in an attempt to give you meaningful entertainment. So when they joined hands to present a supernatural thriller, a little drama was inevitable.

To begin with, Ekta Kapoor reportedly did not promote the film with her usual gusto. She must have been miffed, what with reshooting parts of the movie (Huma Qureshi, for example, lost weight, then gained, then had to lose it again for the 'corrective' shoot - and this inconsistency is pretty obvious on screen).

Plus there were rumours of creative differences between the two producers - Bharadwaj knows his witches (Makdee), and Ekta her horror (Ragini MMS). Their differences, real or imagined, unfortunately translate on to the screen.

Essentially, Ek Thi Daayan takes a rural superstition/belief, and sets it in a big city. Bobo (Emraan Hashmi) is a world-class magician, who performs to packed audiences in Mumbai. His girlfriend Tamara (Huma Qureshi) waits for him to propose to her someday, but they are happy and in love, and even want to adopt a young boy named Zubin from a nearby orphanage (once they are married).

Bobo, however, in one such performance, falters during a crucial moment in his rope trick, injuring his assistant. He is distracted by voices, and Tamara reprimands him later about keeping secrets, but he is not too forthcoming with her. Instead, he visits his childhood psychiatrist Dr. Palit (Rajatava Dutta), who sends him into one long hypnotic slumber, in which Bobo describes a certain period of his life.

He was then 11 years old, his sister was 6, and their father (Pavan Malhotra) was a professor and lecturer. Although the entire flashback is more cinematic than actual hypnosis, we find out that there was a Diana (Konkona Sen Sharma) who married Bobo's father, much to the young boy's disappointment. His strange reluctance to accept Diana as a mother figure is attributed (by Dr. Palit) to too much time spent on reading about witches and demons.

And then his family members die, and the now grown-up Bobo cannot figure out what really happened. All he knows is that the force that destroyed his whole world 20 years ago has promised to return for him, and it looks like the time has come for the prophecy to fulfill itself.

Enter the weird and mysterious 'fan' from Canada, Lisa Dutt (Kalki Koechlin), and Bobo is convinced that she is a message from the netherworld, much to Tamara's consternation.

The screenplay is an adaptation of a short story by Mukul Sharma, who happens to be Konkona's father. The original story may have been popular enough to be considered good literature, but the screenplay of the movie has more than its share of flaws.

For example, the execution of the hypnosis procedure is slightly warped,. Also, since we know all about the young Bobo's childhood, a sentence or a sequence that explains how he went from scared child to magician could have helped. The character makes some profound statements on each building having its own ghosts, underground. And audiences used to the Hollywood takes on witchcraft and black magic will recognise the elements used to drive home the genre of the movie, but will also realise that the genre itself is not pure - there is devil worshipping, mixed with sprites, 666, braided hair, vulcan/Lycan eyes, good spirits, old books, and sex. The 'daayan' does not seem to have its own identity, but borrows heavily from all other entities.

Emraan Hashmi is most relaxed as Bobo the magician. He is natural, and his performance is the most understated of the lot. The rest are a bit OTT - all of them. Konkona Sen Sharma is otherwise impeccable, and Pavan Malhotra is a delight to watch. Kalki is Kalki, but Huma Qureshi seems a little too overconfident to be the distraught wife/girlfriend of a man disturbed by demons. Rajatava Dutta is a breath of fresh air. The child artistes playing young Bobo and his sister are terrific.

The visual effects deserve a special mention, as does the production design. The movie does go into another period for a while, and that has been done convincingly. The makers obviously love the disintegrating effect on destroyed daayans, because you will see it more than you want to - it has been done well, though. The costume design is interesting, despite Huma Qureshi's tent-like dresses.

The music, for a Vishal Bharadwaj/Emraan Hashmi movie, is slightly disappointing, although Gulzar's lyrics provide some poetry. Yaaram is already a popular number, and not just for the music video. The sound design is what is typical for a horror/supernatural film, but the film could have done with a few more sound effects - the ululating reverberations are a new addition to the already vast library of identifiable horror film sounds.

Despite all the brouhaha over Wiccan priestess Ipsita Roy Chakraverti's protests against this movie, and despite all disclaimers stating that the makers have no intention of portraying women in a bad light, you still come away with the niggling feeling that sensuous women with long hair (that may or may not sway on its own) are not normal, or, at least, that you need to be careful when you come across one of those.
Share. Save. Connect.
Tweet
EK THI DAAYAN SNAPSHOT 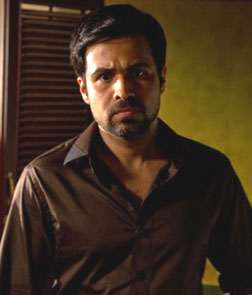 ADVERTISEMENT
This page was tagged for
Ek Thi Daayan hindi movie
Ek Thi Daayan reviews
release date
Emraan Hashmi, Kalki Koechlin
theatres list
Follow @fullhyderabad
Follow fullhyd.com on
About Hyderabad
The Hyderabad Community
Improve fullhyd.com
More
Our Other Local Guides
Our other sites
© Copyright 1999-2009 LRR Technologies (Hyderabad), Pvt Ltd. All rights reserved. fullhyd, fullhyderabad, Welcome To The Neighbourhood are trademarks of LRR Technologies (Hyderabad) Pvt Ltd. The textual, graphic, audio and audiovisual material in this site is protected by copyright law. You may not copy, distribute, or use this material except as necessary for your personal, non-commercial use. Any trademarks are the properties of their respective owners. More on Hyderabad, India. Jobs in Hyderabad.