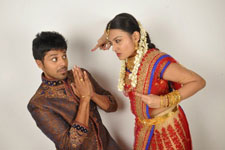 Kritika Deval / fullhyd.com
EDITOR RATING
4.0
Performances
Script
Music/Soundtrack
Visuals
5.0
2.0
4.0
5.5
Suggestions
Can watch again
No
Good for kids
No
Good for dates
No
Wait for OTT
No
So, we spend a good (or bad, whatever) while meeting the family, a set of individuals who each have exactly one characteristic. These people are sometimes fun, but mostly just that one characteristic. The scene is the impending engagement of Bhavana (Nikitha Narayan), and our introduction happens through the lens of the wedding photographer. We meet an uncle with hypertension, an aunt who is basically product placement for Kala Mandir, another aunt who has all the world's make-up right on her face, her husband who talks more on the phone than in person, a father who's supposed to be the quiet and wise patriarch, and his wife who works as his official mouthpiece under the guise of obedience.

Was that last sentence exhausting? Good. We were exhausted watching it.

Pesarattu is a crowd-funded film, the first in the industry. It tries to explore the dynamics of the traditional Telugu marriage, and, if you set aside how the exploration was done, does a pretty decent job of it. Basically, as the whole family is running helter-skelter preparing for the groom's arrival, someone in the menagerie realises that the bride, Bharani, is nowhere to be seen. We get a protracted scene where the news spreads through the family, and another protracted scene where they all assemble in the hall, another one where they go through a flashback, and yet another one where they all decide that they never really liked the boy in the first place and that each one of them had agreed only because all of the others had, too.

If you still haven't figured out the biggest flaw with the film, let us spell it out for you. You see, every single step forward has a build-up, a stretched out "occurrance", and a slow wind-down. You can tell when you see a short film trying to play grown-up.

One flashback involves Bhavana's precocious cousin revealing one of her breakups. The story goes like this. The whole family is out, but for the girls, and Bhavana calls her boyfriend (Nandu) home. The boyfriend is on the verge of proposing marriage, but Bhavana stops him, goes to the side and has a 5-minute panic attack, and then plays a 10-minute prank on the guy. When the scene was implied, we were excited about it. It's not often that you get to see a commitment-phobic girl weasel out of a relationship in Telugu cinema, and it's a scenario a lot more girls would identify with than your usual stuff where the girl assumes that a wedding is the inevitable consequence of holding hands and a kiss or two hidden by roses. When it ended, though, all we could muster up was a surprised gratitude that a scene that showed no signs of ever ending actually did. Keep in mind that this film is only an hour and fifteen minutes long, and has no business seeming so interminable.

The ideas behind it are allright, but we have little to no context for most of the actions. You can almost see a bunch of people sitting around and going like, "You know what would be fun? If all the boyfriend wants to do is watch cricket and we use that to make comedy!" Nikitha Narayan seems like she'd do an allright job if she didn't have to exaggerate every single thing she did, as if this were a 1920s silent film and we wouldn't be able to piece together the scenario without seeing people jumping around with a manic energy. It's just tiring.

Nandu plays every single part where a "hero" is required, and we're still not sure if he counts as one. He gives a decent performance, as do the rest of the cast. However, all of these people come off as really hammy because of the way their roles are treated.

In fact, nearly every problem with Pesarattu boils down to the direction. And also the fact that if there ever was something that just wasn't meant to be a full-length movie, this is it. It's a tiny film as it is, but still manages to be at least an hour too long.

The camera work is decent for the most part, and actually nice in places. The songs are shot well, but the music is just plain annoying. The production values reflect their budget, which isn't necessarily a bad thing.

Pesarattu was once upon a good idea, but not anymore. The only reason you'd want to watch this would be philanthropy. But then, it is really short...
Share. Save. Connect.
Tweet
PESARATTU SNAPSHOT 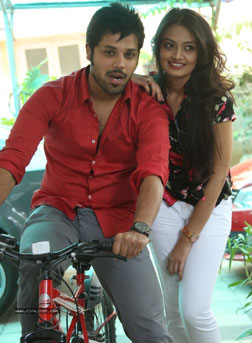 ADVERTISEMENT
This page was tagged for
Pesarattu telugu movie
Pesarattu reviews
release date
Nandu, Nikitha Narayan
theatres list
Follow @fullhyderabad
Follow fullhyd.com on
About Hyderabad
The Hyderabad Community
Improve fullhyd.com
More
Our Other Local Guides
Our other sites
© Copyright 1999-2009 LRR Technologies (Hyderabad), Pvt Ltd. All rights reserved. fullhyd, fullhyderabad, Welcome To The Neighbourhood are trademarks of LRR Technologies (Hyderabad) Pvt Ltd. The textual, graphic, audio and audiovisual material in this site is protected by copyright law. You may not copy, distribute, or use this material except as necessary for your personal, non-commercial use. Any trademarks are the properties of their respective owners. More on Hyderabad, India. Jobs in Hyderabad.