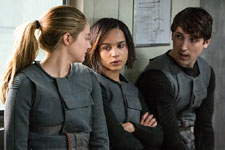 Nupur Barua / fullhyd.com
EDITOR RATING
5.0
Performances
Script
Music/Soundtrack
Visuals
6.0
5.0
4.0
6.0
Suggestions
Can watch again
No
Good for kids
Yes
Good for dates
Yes
Wait for OTT
No
Divergent would have been a low budget movie (relatively) had Lionsgate not jumped in and put in more green. A decision taken after the studio's The Hunger Games made people sit up and take note of Young Adult literature as a serious genre to be translated into film.

Based on the first book of Veronica Roth's trilogy of dystopian Chicago, the film, Divergent, follows the coming of age of a young girl, who may just change the way the world functions, much along the lines of The Hunger Games trilogy. Whether it lives up to its expectations is yet to be decided, but comparisons between the two series are inevitable, and the Jennifer Lawrence starrer may just emerge a clear winner at the end of it all.

Chicago in the apocalyptic future is not the same as it was in the 20th century. A war has devastated the area, and now the inhabitants are secure because of the fence that guards their city.

For a more Utopian society, the people are divided into five factions - Amity, Candour, Erudite, Dauntless and Abnegation. There are also the Factionless, the ones who belong to any of the above. Beatrice (Shailene Woodley) and her brother Caleb (Ansel Elgort) live with their parents, who belong to Abnegation. This is the faction that prefers a spartan lifestyle spent in selfless charity work. It also governs the city, and is led by Marcus (Ray Stevenson). Beatrice's parents, Andrew (Tony Goldwyn) and Natalie (Ashley Judd) work very closely with Marcus.

Every year, 16-year-olds take a test and then decide which faction they want to enrol in. This means that if they choose a faction that their parents are not a part of, then they can no longer live with their families. Beatrice's test results are unusual, but her proctor Tori (Maggie Q) hides it from the rest of the world. She eventually opts for Dauntless, and Caleb joins Erudite, much to the disappointment and dismay of their parents.

Beatrice changes her name to Tris, and has to immediately prepare physically and mentally to be a part of the faction that guards the population. Her instructor, Four (Theo James), fascinates her, but he is a strict taskmaster. As she makes friends amongst the new initiates, and struggles to qualify as a Dauntless soldier, she discovers that her being a Divergent (one who has an aptitude for more than one faction) should remain a secret, or she may pay for it with her life.

In the meantime, the leader of the Erudite, Jeanine (Kate Winslet), is slowly but surely plotting to take over the reins of governance by rendering the Abnegation useless, and Tris must now decide whether she can remain indifferent to the fate of her parents or act according to her conscience.

Like most futuristic, Apocalyptic stories, Divergent, too, deals with the ill-effects of a controlled social system. Rules made ostensibly for the development of a population may eventually lead to a suppressed civilisation, which is why such rules need to be questioned, or rebelled against - this is a theme that most Young Adult literature readers are familiar with.

While The Hunger Games exaggerated the evils of such a society, Divergent plays it safe in that it does not question the system itself, but the vile ambitions of a select few. While the former says that this is no way to live, the latter claims that existing norms are manipulated to suit the villain. And that makes Divergent a little less exciting and more predictable. It seems like yet another masala movie where the angry young woman decides to teach the privileged baddies a lesson in justice. The protagonist has a lot to lose, of course, because her immediate family is targeted, but that makes it seem like a more selfish reason to become the rebel. The conflict and the resolution are just not strong enough for you to invest emotionally in the characters, and you may find yourself watching, in a detached manner, the events that unfold.

The characters lack the fire that eventually drives them into becoming the heroes that they will by the end of the trilogy. In fact, their journey from flawed individuals to brave champions is diluted by their ennui and acceptance of life as it is. The dialogues are not particularly rabble-rousing, nor are the interpersonal relationships indispensable. The writers have made an effort to insert some emotion in the interactions between the characters, but even the romance between Tris and Four is rather tedious. Nothing in the story tells you that they are willing to die for each other, nor does Tris make too much of an effort to mingle with the people who become her companions. She is mostly sullen, without reason, and her journey from weakling to becoming a brave Dauntless is too convenient to be awesome.

There is much that is missing from the book, although Veronica Roth, who is also the co-producer of the movie, has gone on record to say that she was impressed with "how closely it stuck to the general plot of the book".

Shailene Woodley is no Jennifer Lawrence, and it may be unfair to compare the two, but she still has too limited a range of emotions to encompass the feelings of a young rebel. She scowls most of the times, and looks blank at others. Even her physical stunts leave a lot to be desired.

Theo James is surly, too, although his character has reason to be. The chemistry between the two is erratic, and not in a nice way. Ashley Judd has never been so underused in her career. The importance of her character is negligible. Ditto for Ray Stevenson and Tony Goldwyn. Kate Winslet could have been more menacing in her first role as the antagonist. Ansel Elgort and Zoe Kravitz do the best they can, but fail to really make an impression.

The production design is dull, although that may be the point of the story. The makers have obviously made an effort to make the futuristic world look not-so-nice, but a variety in locations would have made the movie more interesting. The costume design, too, could have done with some inspired imagination.

The cinematography is repetitive, although that has a lot to do with most of the sets looking alike. The VFX is obvious, so that defeats the purpose of making the movie look realistic. The action sequences on the train, however, are delightful.

The movie is a little over two hours, but it seems to go on forever, and there are many sequences that the editor could have done away with. The music is more contemporary, and lacks the finesse that could have made you slightly more involved with the film.

At the end of the movie - which is actually the beginning of a series, and therefore you know that the story will continue in 3 sequels - there are many questions that will possibly plague your mind. Where are the children in the other factions besides Abnegation? Why have the Priors not told their gifted children about the dangers of being a Divergent? Is Marcus a bad person? Why? What is the serum that makes Four go into a trance? How does the Council see what goes on in the mind of a candidate?

These questions may not be very intelligent, but the answers, if any, will probably make you understand the film better. Or maybe you should just read the books in the trilogy before watching the rest of the series. Even better, revisit The Hunger Games and Catching Fire, just to remind yourself that this popular genre can still churn out a few gems, Twilight and the likes notwithstanding.
Share. Save. Connect.
Tweet
DIVERGENT SNAPSHOT 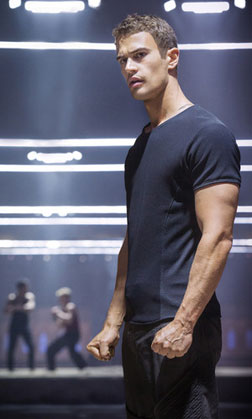 ADVERTISEMENT
This page was tagged for
Divergent english movie
Divergent reviews
release date
Shailene Woodley, Theo James
theatres list
Follow @fullhyderabad
Follow fullhyd.com on
About Hyderabad
The Hyderabad Community
Improve fullhyd.com
More
Our Other Local Guides
Our other sites
© Copyright 1999-2009 LRR Technologies (Hyderabad), Pvt Ltd. All rights reserved. fullhyd, fullhyderabad, Welcome To The Neighbourhood are trademarks of LRR Technologies (Hyderabad) Pvt Ltd. The textual, graphic, audio and audiovisual material in this site is protected by copyright law. You may not copy, distribute, or use this material except as necessary for your personal, non-commercial use. Any trademarks are the properties of their respective owners. More on Hyderabad, India. Jobs in Hyderabad.