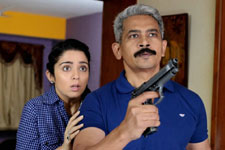 Kritika Deval / fullhyd.com
EDITOR RATING
3.0
Performances
Script
Music/Soundtrack
Visuals
4.0
3.5
6.0
6.0
Suggestions
Can watch again
No
Good for kids
No
Good for dates
No
Wait to rent it
Yes
Let us get one thing one of the way first. Cause-related films work out best when there is one issue to be worked at, and when the victims actually resemble living creatures, and when those protagonists don't try to shove their ideology down the viewers' throats willy-nilly.

Pratighatana, however, stands entirely on the premise that a woman who has been raped is immediately rendered paralised until the screams of an annoyingly strident reporter of the female variety shake her into action, a.k.a. going from sitting in a corner and crying, to standing in front of the media and various other personages and crying.

In fact, that's how all activity happens in this movie. In Pratighatana, the required stimuli for things to happen are Charmi's unending rants. Charmi screams, shit happens. Shit in this case includes an unending series of murders and mayhem that reads like the most depressing of homilies designed to make even those sympathetic to the cause dig in their heels and say they won't do a thing until the internal shouting stops.

The film begins with Atul Kulkarni doing his psychotically righteous cop shtick, and owning it. Then we move to a sidey club where Nischala (Charmi) Scooby Doo-s her way through the place (an encounter that probably ended with cokeheads grumbling, "I would've gotten away with snorting away my life, if not for that meddling TV5 reporter").

Then, when her bottomline-obsessed boss (Tanikella Bharani) gives her more Page 3 projects, she grabs on to a discarded project of a colleague, and hightails it to a village where a college girl's rape case was sinking into obscurity.

What follows is a series of violent bumbling so illogical as to immediately put paid to the idea that reality is weirder than what the human mind is capable of conjuring from nothingness.

Get a load of this series of events for instance.

Nischala goes to village and tries to run the victim, Lakshmi, down. When that doesn't work, Nischala starts harassing random villagers into answering her questions. When they refuse, as they rightly should when a stranger with a mic and a camera shouts and tries to break her way into a house, Lakshmi's friend Shanti (Reshma) relates a flashback involving an entire song at a college fest, a group of drunken rapists, a village where everything shuts down when anybody is in the hospital, and a cop who gets a girl on the verge of death to come to the police station so he could get an organic statement for a case he wasn't going to register in the first place.

It gets weirder. Nischala somehow gets the case registered. Then she goes off to the city. Meanwhile, Lakshmi and her parents get murdered. Then our heroine comes back and tries to get that case registered, and goes back to Hyderabad. Meanwhile, Shanti gets brutally raped and sent off into a coma.

Meanwhile, there is a political drama brewing, all of which surrounds getting sympathy votes based on PR from one rape case, never mind that most politicians target vote banks based on caste, projected image, economic issues, urban/rural divides, larger safety issues, religious affiliations and any number of other factors that could sway a public that has pretty much been anaestetised to stray cases of violence.

Call us cynical, but, can a film that purports to be calling out to the unfeeling masses to take their safety in their own hands, logically also be using their "sensitivity" to one well-publicised case of violence against women as a tool to play pass-the-parcel with the Chief Minister's seat?

Basically, apart from the fact that the makers gave the plot about as much thought as Nischala did to the fact that she was hurling abuses during a live telecast (which was being anchored by her), Prathighatana's good intentions peek out at the oddest of times, especially when they are brutally caricaturizing the local media's thirst for sensation, the laughable simplicity of our politicians' motivations, the way society insists that rape is the absolute end of life, and the way people turn into sheeple at the merest hint of a trending idea.

The problem, however, stems from the equally dogmatic tone of their preaching. Nobody ever preaches with reason. Not even the "good guys" are safe from the makers' propensity to typecast. The only person who speaks the voice of sanity is Atul Kulkarni's rather dashing "honest cop", and he has all the mental stability of Hannibal Lecter.

Charmi should've chosen to show off her very much peccable Telugu in a more light-hearted venture, but that could be a long wait the way her career graph is right now. Either way, the choice to use her own voice works out pretty well in a few rather emotional scenes.

All the other actors acquit themselves well, even Bharani garu and Jhansi, for the short moments they are on the screen. Posani's is the most entertaining character in a film where everyone takes themselves way too seriously.

The cinematography is as exaggerated as the rest of the film, but, when taken out of the film's context, is also well-accomplished. The music is dated, and gives as much of a headache as Charmi's lecturing.

Prathighatana's biggest fault lies in the fact that Telugu communicators don't think there is any way to impress a message onto people except stridently, loudly, and as much like a carpenter impressing a nail onto a piece of wood as possible. That is how our social campaigning works. That is how our political campaigns work. Ergo, that is how our cinema works.

The question is, do these filmmakers really expect people to make intelligent decisions when the call for such decision-making comes in a form so rousingly unintelligent?
Share. Save. Connect.
Tweet
PRATIGHATANA SNAPSHOT 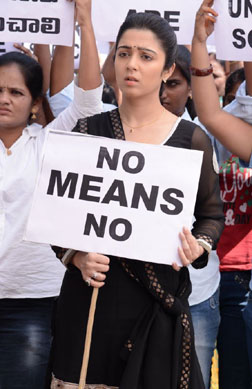 ADVERTISEMENT
This page was tagged for
pratighatana telugu full movie
Pratighatana telugu movie
Pratighatana reviews
release date
Charmi, Raghu Babu
Follow @fullhyderabad
Follow fullhyd.com on
About Hyderabad
The Hyderabad Community
Improve fullhyd.com
More
Our Other Local Guides
Our other sites
© Copyright 1999-2009 LRR Technologies (Hyderabad), Pvt Ltd. All rights reserved. fullhyd, fullhyderabad, Welcome To The Neighbourhood are trademarks of LRR Technologies (Hyderabad) Pvt Ltd. The textual, graphic, audio and audiovisual material in this site is protected by copyright law. You may not copy, distribute, or use this material except as necessary for your personal, non-commercial use. Any trademarks are the properties of their respective owners. More on Hyderabad, India. Jobs in Hyderabad.