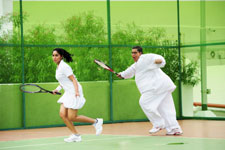 Ravi Kandala / fullhyd.com
EDITOR RATING
1.0
Performances
Script
Music/Soundtrack
Visuals
2.0
1.0
1.0
3.0
Suggestions
Can watch again
No
Good for kids
No
Good for dates
No
Wait to rent it
No
The Telugu Film Industry (TFI) is notorious for its insensitivity to stereotypes. Films like Kobbari Bondam and Kitha Kithalu have made fun of fat people no end. However, these films also put forth some sort of a moral stance, however superficial, towards the end of the movie, preaching about how someone should not be judged on their physical appearance.

Laddu Babu is also the story of a fat - make that obese - man. However, it is in no way similar to the kind of movies mentioned above. Those had generous doses of comedy, a storyline that made you sympathise with the fat protagonist, and some message - this one has next-to-none comedy, a non-existent storyline and no message whatsoever.

Instead, it is an insanely insensitive film that does not spare anyone. Bald, short, tall, fat (of course), fair, dark, young, old - everyone with is made fun of in the most vulgar manner possible. In fact, Ravi Babu takes insensitivity a step further by even using conjoined twins and writing some deplorable lines about them.

The film, as is obvious from the title, promos and posters, is about Laddu Babu (Allari Naresh), an impossibly obese man. Laddu was not always like this - he was a slim and trim youngster once, but turned so overweight owing to a mosquito bite (yeah, if you've walked in to this movie, suck it and believe it). He tries only utterly ineffective non-medical methods to cure himself - like using a tricycle that breaks off in a few seconds.

Laddu Babu's marriage is somehow linked to his inheriting the house that he stays in and his father, Mushti Kishtayya (Kota Srinivasa Rao), is desperate to sell off the house and settle in Goa. He hence brings up a line of brides which includes all the types mentioned above.

Laddu wants to get married for love, and he is in love with Maya (Poorna). There is also a parallel thread involving Murthy (Master Atul), son of a widow (Bhoomika), who forces Laddu Babu to become his friend. The film is a painful chronicle of events involving these characters, and the ultimate tragi-comic conclusion.

Ravi Babu has made some half-decent flicks, a few whacked out and weird comedies, and a couple of imaginative thrillers, too, but this one is by far the worst of them all. About two hours of the two-and-a-half-hour duration of the flick is supposed to make you laugh out loud, but hardly a chuckle could be heard in the theatre (the fact that this reviewer was one of the 6 persons in the theatre could've contributed to this, too). The film is neither funny nor engaging, and the sudden shift to melodrama in the last half hour seems super-forced.

Allari Naresh is buried under layers of makeup and it is completely impossible to discern if he is even moving his lips while uttering his dialogues. Poorna hardly has any role while Bhoomika makes us wonder why she ever accepted hers. Master Atul has a weird role (imagine a guy who brings home an utterly obese guy and asks his mom to marry the guy - the logic being that his mom loves teddy bears and hence will love this guy, too!). Kota seems superbly disinterested. Everyone from Brahmanandam to Raghu Babu and the late AVS makes an appearance for a single scene, but is wasted due to insipid lines.

The technical values are all fine and Ravi Babu displays his usual level of eccentricity in the picturisation of songs, but it is wasted effort. Chakri's music is banal, and the fact that he seems to sing all the songs is not helping at all.

Laddu Babu is one of those films that make you wonder about the Censor Board. The Board that lays down rules against making fun of Brahmins or against the evil depiction of Reddys does absolutely nothing to stop the victimization of midgets, dark-skinned people etc. Avoid this one at all costs and send out a strong message to Ravi Babu.
Share. Save. Connect.
Tweet
LADDU BABU SNAPSHOT 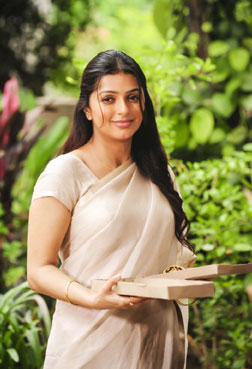 ADVERTISEMENT
This page was tagged for
Laddu Babu telugu movie
Laddu Babu reviews
release date
Allari Naresh, Bhumika Chawla
theatres list
Follow @fullhyderabad
Follow fullhyd.com on
About Hyderabad
The Hyderabad Community
Improve fullhyd.com
More
Our Other Local Guides
Our other sites
© Copyright 1999-2009 LRR Technologies (Hyderabad), Pvt Ltd. All rights reserved. fullhyd, fullhyderabad, Welcome To The Neighbourhood are trademarks of LRR Technologies (Hyderabad) Pvt Ltd. The textual, graphic, audio and audiovisual material in this site is protected by copyright law. You may not copy, distribute, or use this material except as necessary for your personal, non-commercial use. Any trademarks are the properties of their respective owners. More on Hyderabad, India. Jobs in Hyderabad.