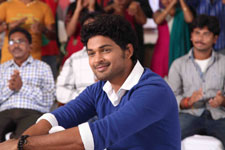 Kritika Deval / fullhyd.com
EDITOR RATING
2.0
Performances
Script
Music/Soundtrack
Visuals
4.5
2.0
1.5
3.5
Suggestions
Can watch again
No
Good for kids
No
Good for dates
No
Wait to rent it
Yes
When filmmakers are all fired up about the rank state of the State, we sometimes get wonderful things, like this. And this. More often than not, though, we get Prabhanjanam.

When the angry young man has looks, money, power and the social status accorded to the scion of a political family, like Chaitanya (Ajmal) does here, apparently the quest for social justice takes all of the most illogical twists and turns you could never think of. You see, he and two of his buddies, Sandhya (Aarushi) and Pranita (Panchi Bora), are all kids of 3 powerful men who commit all kinds of political sleazebaggery while piggybacking on their SC/ST status.

Now, the film begins with Chaitanya having the normal kinds of IIT and IIM ambitions. However, when one of his friends commits suicide post failure to crack a competitive exam, Chaitanya goes through a change of heart and decides to get into politics after his father. But not until he and his friends stage a lawsuit against "corruption" that will have you peeing your pants in a curious mix of laughter and despair.

Anyway, now that the decision has been made, apparently nothing, not even people guffawing at him to hide their shame at what cinema can become, can stop his awkwardly strident climb to the CM's seat.

When the elections are a stone's throw away, not even good intentions can save a film that so obviously unintentionally caricaturizes all aspects of our politics. We don't need to go to the movies to watch more meaningless campaigns disrupting life. Nor do we need to beleaguer Nasser into spreading gyan all over the place out of the blue. When all of this is done with all the coherence and meaningfulness and subtlety of a field of detonating landmines, what we need is to be sitting at home sipping on Roohafza while staring at our fingernails.

While decent performances by senior actors do their best to soothe your seething senses, Ajmal swings wildly between manic swag and cardboardish swag. The girls are like that saying about bad food - they don't have much to do and, worse, there isn't much of them.

The music is as painful to the ear as it is mostly irrelevant. The visuals lack finesse. And the editing is like the aforementioned statement about food and the girls.

All in all, as of now, rewatching RDB is the way to go with rejuvenating your political opinions.
Share. Save. Connect.
Tweet
PRABHANJANAM SNAPSHOT

ADVERTISEMENT
This page was tagged for
Prabhanjanam telugu movie
Prabhanjanam reviews
release date
Ajmal, Sandesh
theatres list
Follow @fullhyderabad
Follow fullhyd.com on
About Hyderabad
The Hyderabad Community
Improve fullhyd.com
More
Our Other Local Guides
Our other sites
© Copyright 1999-2009 LRR Technologies (Hyderabad), Pvt Ltd. All rights reserved. fullhyd, fullhyderabad, Welcome To The Neighbourhood are trademarks of LRR Technologies (Hyderabad) Pvt Ltd. The textual, graphic, audio and audiovisual material in this site is protected by copyright law. You may not copy, distribute, or use this material except as necessary for your personal, non-commercial use. Any trademarks are the properties of their respective owners. More on Hyderabad, India. Jobs in Hyderabad.