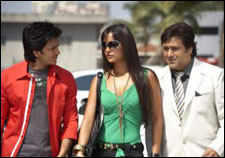 Deepa Garimella / fullhyd.com
EDITOR RATING
6.0
Performances
Script
Music/Soundtrack
Visuals
8.5
6.0
6.5
8.0
Suggestions
Can watch again
Yes
Good for kids
No
Good for dates
Yes
Wait to rent it
No
Life with 2 wives is hardly as funny as being in a David Dhawan movie, so the much-married Raj (Govinda) decides to go ahead and indulge with a girlfriend. This is because having Kiran (Sushmita Sen and her much-publicized extra kilos) for a spouse is like having 2 wives rolled into one. Make that 2 wives and a boss, too, because she's the owner of the group of industries that he's the CEO of.

Now the girlfriend in question is a hot girl who sings and dances on screen, a rather blandly named Dolly (Lara Dutta). Raj, as you can guess, lives a life that is the mental equivalent of a trapeze artist. He's living blissfully in his dual existence, until a photograph - one of Dolly giving him an earful on the street - surfaces.

What saves his behind is the presence of a random passerby Govardhan (Riteish Deshmukh) in the picture. Raj convinces Kiran that the guy and Dolly are a couple, and that he was just incidental to the photograph.

Raj thinks he's smarter than his wife and knows that she's all suspicious now. He gets Govardhan hunted down, and it turns out that he is a bashful young guy living in a one-room apartment and in need of money to treat his sick mother. Raj ends up pampering him so he can pretend to be Dolly's boyfriend for a while. Govardhan, it turns out, is a huge fan of Dolly's, but is not the kind to go beyond sticking her pictures on his bathroom walls. Maybe because the bathroom is the only place where he has privacy - the rest of his flat doesn't have curtains, or even window panes.

Kiran now sets a detective Nunu (Ranvir Shorey) on him. Dolly, who's let in on the plan by Raj, smells the detective on her trail. Much against Govardhan's wishes, she tries to put on a sufficiently convincing act with her supposed boyfriend, to shoo Nunu away. Only, she's mostly acting in front of the wrong audience - no one has come to see her act, really. Plus, Raj's assistant is also spying on Govardhan, and news of their coziness keeps getting Raj all worked up.

Do Knot Disturb suffers from logic about as much as a tipsy party-goer suffers from woolly-headedness - but they're both happy, so what the heck. How Govardhan is hunted down, how the scene shifts randomly to foreign restaurants while people are still referring to Delhi, or, for that matter, that entire sequence with Nunu's comatose body - are all no fun if they'e being dissected. And this one's a clean comedy, if you'll excuse the fact that the central theme is an extra-marital affair and there's a skimpily dressed Lara Dutta as an accessory.

Govinda and Riteish Deshmukh are terrific in that department that differentiates the Govindas and the Riteish Deshmukhs of the world from the electricity boards and the credit card telecallers of the world - timing, or to be more precise, comic timing. So is Manoj Pahwa, who plays Raj's assistant. Lara Dutta is pretty good, while Sushmita Sen exudes immense grace despite her weight.

Ranvir Shorey is wasted, while Rajpal Yadav manages to make, as with most other things that he does, his dialogues drip with an unwanted bawdiness. Sohail Khan's is a non-role, but he is quite funny, too.

Plush visual quality and a wacky soundtrack add to Do Knot Disturb's being qualified as a good weekend laugh-out package. Nadeem Shravan's songs are good to tap your feet to.

A barrel of laughs is known to irrationally expand when you have company, and Do Knot Disturb's brimming over already. Get yourself a mug and slosh over.
Share. Save. Connect.
Tweet
DO KNOT DISTURB SNAPSHOT

See Do Knot Disturb full details
DO KNOT DISTURB USER REVIEWS
1 - 1 OF 1 COMMENTS
POSITIVE  |  NEGATIVE |  NEWEST  |  OLDEST  |  MOST HELPFUL  |  LEAST HELPFUL
USER RATING
1.0
1 USER
Performances
Script
Music/Soundtrack
Visuals
1.0
1.0
1.0
1.0
Can watch again - No
Good for kids - No
Good for dates - No
Wait to rent it - No
venkat on 3rd Oct 2009, 10:31am | Permalink
DKD is an atrocious film and David Dhawan should stop making such films and better sit as a judge on the TV reality programmes. The film has a plot and few scenes inspired by Kamala Haasan's Hllarious Tamil film "Pancha Thandiram" and I fear to mention this to let somebody even compare both these films. Worth missing it instead of spoiling your weekend.


Pros: nothing
Cons: the film itself

ADVERTISEMENT
This page was tagged for
Do Knot Disturb hindi movie
Do Knot Disturb reviews
release date
Govinda, Riteish Deshmukh
theatres list
Follow @fullhyderabad
Follow fullhyd.com on
About Hyderabad
The Hyderabad Community
Improve fullhyd.com
More
Our Other Local Guides
Our other sites
© Copyright 1999-2009 LRR Technologies (Hyderabad), Pvt Ltd. All rights reserved. fullhyd, fullhyderabad, Welcome To The Neighbourhood are trademarks of LRR Technologies (Hyderabad) Pvt Ltd. The textual, graphic, audio and audiovisual material in this site is protected by copyright law. You may not copy, distribute, or use this material except as necessary for your personal, non-commercial use. Any trademarks are the properties of their respective owners. More on Hyderabad, India. Jobs in Hyderabad.