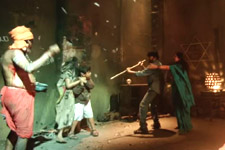 Anil Bandhakavi / fullhyd.com
EDITOR RATING
3.5
Performances
Script
Music/Soundtrack
Visuals
4.0
2.0
4.0
5.0
Suggestions
Can watch again
No
Good for kids
No
Good for dates
No
Wait to rent it
Yes
Ram Gopal Verma's Deyyam seems to be a Telugu rendition of his Hindi horror film, 12 'o' Clock, from earlier this year. The writer/director seems to be a little possessed by the idea of possession, but predictability and an almost comic level of exaggeration of the audio and visual elements turn this movie into a parody of itself.

Vijji (Swathi Deekshith) starts experiencing strange episodes in which her surroundings suddenly become horrifyingly unfamiliar. In one instance, wherever she goes everyone is staring at her, and on another occasion, she suddenly becomes the only one in her classroom after the other students mysteriously disappear. The episodes usually end in her snapping out of a daymare or nightmare.

Viiji complains about her condition to her father (Rajasekhar) who initially attributes her experiences to anxiety, but as her condition gets worse, he is forced to accept that something beyond his understanding is at play. Once at the point of no return, it is quite clear that Vijji is possessed by a spirit that's using her body to carry out its evil deeds.

It is tough to gauge the intentions behind this production. The attempts at spooking the audience are slapstick, and actually become comical towards the end. You are bound to hear chuckles in the theatre at points where the film is possibly going for a scare. The cheesy depictions of the doctors and the police almost convince you that RGV is actually toying with us by doling out doses of horrific humour.

Indeed, from the meaningless gibberish coming out of the teacher's mouth in the classroom scene to Vijji donning a potato sack during her exorcism, numerous instances in this movie will make you think to yourself that they cannot actually be serious. Forget any room for fear, if you suffer from blood pressure or have a weak heart, this film will probably offer some relief. After a point, a teary-eyed Rajasekhar, with a constant drop in his right eye on the brink of trickling down his cheek, is really the only guy taking the story seriously.

The performances are backed by a seriousness that's maybe a notch above the fervour to win a casual game of cricket at the family picnic. To illustrate, while discussing the girl's case with a fellow doctor, Tanikella Bharani leans back in his chair to the point of lying down with a coffee cup carefully balanced on his chest. To be fair, though, Swathi Deekshith expends immense energy playing Vijji, who's possessed by a spirit that's mostly occupied with roasting the police for their incompetence.

The makeup department renders a possessed Vijji that offers a piercing stare through narrow black pupils surrounded by devilishly white irises in what seems to be a great idea for a Halloween costume. The sound department maintains the theme of caricatured excess by delivering effects that are too suggestive to maintain any heightened sense of anticipation of shock. The camerawork, however, is quintessentially RGV.

RGV's filmmaking abilities will never be up for debate. But where exactly is he going with movies such as this one is something to ponder upon. In any case, if you have to win a bet that you can watch a horror film and then spend the night alone in a bungalow, Deyyam's your pick. 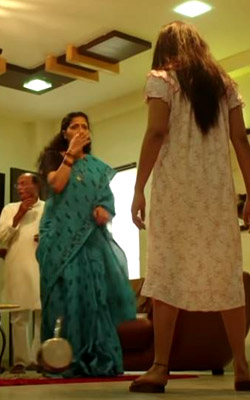 ADVERTISEMENT
This page was tagged for
Deyyam - 2021 telugu movie
Deyyam - 2021 reviews
release date
Swathi Deekshith, Rajasekhar
theatres list
Follow @fullhyderabad
Follow fullhyd.com on
About Hyderabad
The Hyderabad Community
Improve fullhyd.com
More
Our Other Local Guides
Our other sites
© Copyright 1999-2009 LRR Technologies (Hyderabad), Pvt Ltd. All rights reserved. fullhyd, fullhyderabad, Welcome To The Neighbourhood are trademarks of LRR Technologies (Hyderabad) Pvt Ltd. The textual, graphic, audio and audiovisual material in this site is protected by copyright law. You may not copy, distribute, or use this material except as necessary for your personal, non-commercial use. Any trademarks are the properties of their respective owners. More on Hyderabad, India. Jobs in Hyderabad.