In The Heart Of The Sea (3D) Review 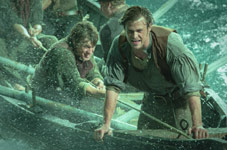 Josh / fullhyd.com
EDITOR RATING
6.5
Performances
Script
Music/Soundtrack
Visuals
6.0
6.0
7.0
9.0
Suggestions
Can watch again
Yes
Good for kids
No
Good for dates
Yes
Wait for OTT
No
Herman Melville (Ben Whishaw) is at the doorstep of an ex-sailor Thomas Nickerson (Brendan Gleeson) looking for the story of the Essex, a whaling ship in which Nickerson was a cabin boy (young Nickerson played by Tom Holland). The Essex was captained by a relatively incompetent George Pollard (Benjamin Walker), and though his first mate was a seasoned sailor Owen Chase (Chris Hemsworth), the two didn't see eye to eye. Chase was both covetous and deserving of the captaincy, but Pollard beat him to the post by being born with a silver spoon.

This rivalry bows out to the expediency of finding whales to fill whale oil in the 2,000 barrels that they set off with. They trudge on into the deep seas because humanity had already cleared off a large of whales in the regions close to land. And 1,200 nautical miles into the sea, they encounter the white whale.

And when they say whale, they are only being technically correct, because the beast is nothing like an ordinary whale. While the average sperm whale is gigantic at 40 feet long, the leviathan these men encounter measures over 100 feet. And it protects its clan with an almost human-like vengeance. In the encounters that follow, sailors suffer loss of property, life and, in extreme cases, sanity.

Ron Howard's In The Heart Of The Sea is like a smooth machine noiselessly working away to churn out functionally precise and dimensionally accurate products. That does sound like a good thing until you acknowledge that a film isn't so much a feat of engineering as it is a work of art. You wouldn't really take time to artistically evaluate an Adam Sandler movie because you know they did not mean it that way. But Ron Howard wants his film to be something of an epic, and doesn't succeed.

Moby Dick is considered a true epic not because of its exploration of a surreal whale in the depths of the seas but because of its exploration of humanity in the depths of desperation. The premise lends itself to parallels to be drawn. Moby Dick can be considered a study on perception, ethics, and of course, obsession. In The Heart Of The Sea, on the other hand, is just a spectacle/survival movie.

Nothing wrong with spectacles as such, but its attempts at being epic pull it down from fully realising itself as a nail-biting thriller. Let's compare with The Walk - it was an unapologetic spectacle film which thrived on giving vertigo to anyone who watched the unending climax in 3D. Such thrills are very much present in In The Heart..., but just not enough.

However, whatever thrills there are, are fascinating. Howard's work is excellent when the whale enters the picture. The sense of largeness and being surrounded by doom play extraordinarily. The score is thumping in these moments, and those scenes have to be seen to be believed (in 3D, mind you). The latter portions where the crew is stranded in boats for three months reminds you of Life Of Pi. However, where Ang Lee's visuals tended towards magical realism, Howard keeps it realistic.

The acting is at the standards we expect from such a cast. Cillian Murphy and Benjamin Walker are particularly good. Hemsworth acts well, but the language in the film is a minor issue - all of Hemsworth's good looks can't eclipse the fact that no one spoke like that in the early 1800s. The lines feel too contemporary. Even on other occasions, you sense this anachronism in terms of the dispositions of the actors.

Historical inaccuracies aren't new or undesirable to Ron Howard (A Beautiful Mind is a bare shadow of Slyvia Nasser's book). His strengths usually lie in bending real incidents to suit his drama requirements. If he'd stuck just to thrills or just to drama, the film would have been greatly satisfying. However, he attempts more here and ends up with less. A pity.
Share. Save. Connect.
Tweet
IN THE HEART OF... SNAPSHOT
IN THE HEART OF THE SEA (3D) SNAPSHOT 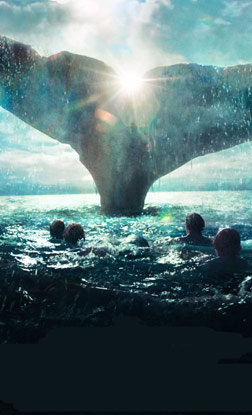 ADVERTISEMENT
This page was tagged for
In The Heart Of The Sea (3D) english movie
In The Heart Of The Sea (3D) reviews
release date
Chris Hemsworth, Benjamin Walker
theatres list
Follow @fullhyderabad
Follow fullhyd.com on
About Hyderabad
The Hyderabad Community
Improve fullhyd.com
More
Our Other Local Guides
Our other sites
© Copyright 1999-2009 LRR Technologies (Hyderabad), Pvt Ltd. All rights reserved. fullhyd, fullhyderabad, Welcome To The Neighbourhood are trademarks of LRR Technologies (Hyderabad) Pvt Ltd. The textual, graphic, audio and audiovisual material in this site is protected by copyright law. You may not copy, distribute, or use this material except as necessary for your personal, non-commercial use. Any trademarks are the properties of their respective owners. More on Hyderabad, India. Jobs in Hyderabad.