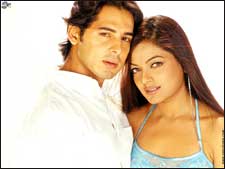 Deepa Menon / fullhyd.com
EDITOR RATING
1.0
Performances
Script
Music/Soundtrack
Visuals
NA
NA
NA
NA
Suggestions
Can watch again
NA
Good for kids
NA
Good for dates
NA
Wait to rent it
NA
You have to wonder why certain movies are even made. It’s obvious nobody cares. The actors look bored, the plot is hackneyed, and the ghost of an idea that you saw glimmering at the start of the film has gasped its last even before the first scene is finished.

Insaaf ('The Justice' for your edification) is about corruption in our country. Yes, one of those. And it starts off by asking some very basic, yet pertinent, questions that surmise thus it doesn’t matter who is running the government, the aam junta is screwed anyway. No arguments here, so let’s move on.

The story is set in a state where law and order are both equally expendable commodities in the eyes of the ruling party. Nobody mentions any names, but we assume this is Bihar they’re talking about, because of the Laloo-esque character who plays the CM. On the other hand, his name is Chandra Babu and he's part of the coalition, so it really could be any politician you pick out of a hat.

Sanjay Suri and his wife Namrata Shirodkar come to live in this friendly neighbourhood. After a couple of run-ins with a power-wielding MLA next door (played by Kunika), they decide maybe this is not such a great place after all. Then Namrata gets raped by the MLA’s son, and suddenly people get real unfriendly.

The couple finds that they can’t lodge a complaint against the rapist, no matter where they go. Frustrated by the system and his seeming inability to do anything about it, Sanjay kills himself. Now Namrata is left with her little daughter in a big, bad world, when in steps her Knight In Khaki, Dino Morea.

Dino and his reporter girlfriend (this year’s recipient of the Most Annoying Female Lead award) set out to find justice for Namrata. On the way they’re faced with many, many odds, not least of which are an uninterested make-up artist and a costume-designer who takes her title quite literally.

After Dino has beaten up the baddies at least four times each, Namrata has her turn and this is perhaps the funnest part of the movie. When she finally traps him, she knees her rapist in the groin repeatedly for ten glorious seconds. Too little, too late... but still enjoyable, on the whole.

Justice is served after all, and Namrata even gets to murder the rapist. And she gets away with it, her chiffon-clad, mangalsutra-ed respectability intact. Like all movies that claim to give women their due, this one is also full of screeching, bawling and vampish females, who need men to help them every time they’re up shit creek. Which, by the way, would have made a great name for this movie.
Share. Save. Connect.
Tweet
INSAAF SNAPSHOT

ADVERTISEMENT
This page was tagged for
insaaf the justice movie kickass
Insaaf hindi movie
Insaaf reviews
release date
Dino Morea, Sanjay Suri
Follow @fullhyderabad
Follow fullhyd.com on
About Hyderabad
The Hyderabad Community
Improve fullhyd.com
More
Our Other Local Guides
Our other sites
© Copyright 1999-2009 LRR Technologies (Hyderabad), Pvt Ltd. All rights reserved. fullhyd, fullhyderabad, Welcome To The Neighbourhood are trademarks of LRR Technologies (Hyderabad) Pvt Ltd. The textual, graphic, audio and audiovisual material in this site is protected by copyright law. You may not copy, distribute, or use this material except as necessary for your personal, non-commercial use. Any trademarks are the properties of their respective owners. More on Hyderabad, India. Jobs in Hyderabad.