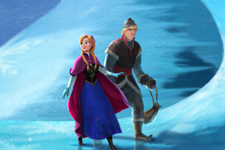 Swayamsrestha Kar / fullhyd.com
EDITOR RATING
7.5
Performances
Script
Music/Soundtrack
Visuals
7.0
7.0
7.0
8.0
Suggestions
Can watch again
Yes
Good for kids
Yes
Good for dates
Yes
Wait to rent it
No
"Do you want to build a snowman?" sings a little girl outside the door to her sister's room. It's a tempting invitation; a plea issued to a sibling who has shut herself off from her little sister. Most of all, it is the earnest request of a child who is extremely reluctant to manoeuvre childhood's fickle path alone, to face the daunting enemy that is loneliness, armed with nothing more potent than the innocent longing for company that children usually exhibit. It is a heartbreaking song, sung with all the summery cheerfulness you'd expect from a Dickensian tramp, or, in this case, from a particularly resilient child.

It seems, though, that Disney is determined to incorporate a few new elements into its kitty of tropes. Instead of going the usual fairytale way, where the wide-eyed singing princess seems to be only waiting for a baritone to duet with her, Disney has been trying to infuse more strength into the princess's voice itself.

So, in Tangled, we had a somewhat naive Rapunzel determined to escape the dreary fortress she's perpetually locked up in, not to meet the love of her life - some incredibly square-jawed bronze-haired bozo - but to fulfill a long-cherished dream. Tiana from The Princess And The Frog wanted to build a restaurant of her own. With every new movie that the studio releases, Disney has been decidedly trying to move out of its comfort zone.

Elsa (Idina Menzel) and Anna (Kirstin Bell) are two princesses in the Scandinavian-like settlement of Arendelle. Elsa has a peculiar power over snow, she can control it and wield it according to her will, and sometimes, against it. The latter power causes her to hurt Anna during a particular session of playful romping, and as a result, their parents advise their elder daughter to stay away from her beloved sister.

It's a cruel predicament for a child, but Elsa bears it with a heart-wrenching stoicism. The king and the queen also order the settlement gates to be closed. The royal palace ceases to host parties or to entertain guests. Little Anna is left alone. She tries to get through to her sister, but to no avail.

Years pass, and both the girls are grown up. Anna is as chirpy and flighty as a hummingbird. Elsa, on the other hand, has receded even further into herself, and takes her father's words of advice - "Conceal, don't feel" - very seriously. She has no other choice.

Then, the king and queen die, and Elsa is to be crowned the queen of Arendelle. Finally, the main gates are thrown open, and Anna meets a strapping young prince, whom she immediately falls in love with. They decide to get married on that same day, and Anna asks for her sister's approval.

Elsa points out the utter ridiculousness of it all. Heated words are exchanged. As a result, Elsa ends up losing her iron-clad control, and unwillingly casts Arendelle into a long harsh winter. Remorseful and utterly heart-broken, she leaves Arendelle.

Anna decides to bring her sister back. On the way, she meets an ice-seller called Cristoff (Jonathan Groff) and a snowman called Olaf (Josh Gad) who was animated by Elsa.

The usual Disney tropes are all there. Both Elsa and Anna are unnaturally pretty, and have eyes so big you'd think that they are constantly snorting up coke or something. There is also a little too much happiness floating around for a subject matter that is inherently bleak.

But, such impeccable animation! The simulation of the snowflakes will make you want to reach forward and try to catch one of them. The colour palette is replete with winter blues, and chilly turquoise tones. The 3D is very well-used. In technique at least, Disney outsmarts Pixar this time.

All the songs are beautifully orchestrated. Instead of merely clunking up the narrative, they propel it forward with an optimistic buoyancy of spirit that is very gratifying to behold. The dialogues are snappy, and the screenplay has been crisply done.

Elsa is no evil, twisted Snow Queen (antagonist of the Hans Christian Anderson story on which the film is based). As she helplessly succumbs to a power that she has no control over, she incites the most sympathy from you.

Anna, on the other hand, is one cool gurl. She breezes through the frames with such infectious effervescence, and is so terribly fun to be around that you feel yourself wanting a BFF like her. As Olaf says later in the film, "Some people are worth melting for".

Frozen's got its heart in the right place. It is an especially important movie to take your kid to, for young girls/boys should know that princesses need not always simper, that sometimes, being optimistic really works out in the end, and that, you can never love your sibling enough.

PS: Make sure you don't miss the Mickey Mouse shot in the beginning. That's the stuff childhoods are made of.
Share. Save. Connect.
Tweet
FROZEN (3D) SNAPSHOT 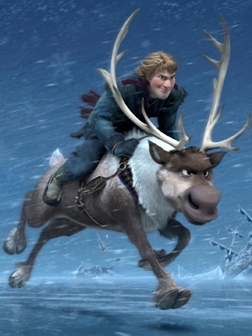 ADVERTISEMENT
This page was tagged for
Frozen (3D) english movie
Frozen (3D) reviews
release date
Kristen Bell - Anna (voice), Idina Menzel - Elsa (voice)
theatres list
Follow @fullhyderabad
Follow fullhyd.com on
About Hyderabad
The Hyderabad Community
Improve fullhyd.com
More
Our Other Local Guides
Our other sites
© Copyright 1999-2009 LRR Technologies (Hyderabad), Pvt Ltd. All rights reserved. fullhyd, fullhyderabad, Welcome To The Neighbourhood are trademarks of LRR Technologies (Hyderabad) Pvt Ltd. The textual, graphic, audio and audiovisual material in this site is protected by copyright law. You may not copy, distribute, or use this material except as necessary for your personal, non-commercial use. Any trademarks are the properties of their respective owners. More on Hyderabad, India. Jobs in Hyderabad.