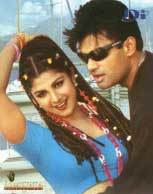 RSA / fullhyd.com
EDITOR RATING
5.0
Performances
Script
Music/Soundtrack
Visuals
NA
NA
NA
NA
Suggestions
Can watch again
NA
Good for kids
NA
Good for dates
NA
Wait for OTT
NA
For the third time, Sunil Shetty and Ashok Honda have come together. Their previous releases were "Anth" and "Rakshak". Krodh is a remake of the Telugu movie Hitler, which itself was adapted from a Malayalam movie. The movie gave a fresh lease of life to the megastar Chiranjeevi whose career was in doldrums. However, it appears Sunil Shetty is not so lucky.

Karan (Sunil Shetty) has five sisters (Sakshi Shivanand, Sashi Sharma, Pooja Seth, Tanya, Dimple Ghosh), to whom he is father, mother, friend, guide, guardian, God and what not. When any roadside Romeo casts his evil looks on his sisters, he becomes their rakshak and shows them their anth.

But his sisters are no less either. While they don the masks of traditional Indian teenage girls in his presence, behind his back they see to it that their clothes remain above their knees. Raj (Apoorva Agnihotri) and Prem (Johnny Lever) select two among the available five girls to fall in love with, and naturally earn the wrath of possessive Karan. Karan also hates his father Balwant (Kader Khan), whom he believes to be the cause of his mother's death.

Inspite of so many females in the movie, the director is still not satisfied. So he introduces Pooja (Rambha), Raj's sister, who loves Karan. Karan keeps her at a distance to set an example to his sisters. Poor guy! He is unaware how they carry on with their love lives at his cost.

Though the first half is good, the story loses the hold over the audience in the second half. The film has excessive doses of emotions and sentiments. Sunil Shetty puts up mysterious expressions on his face in emotional scenes. He appears more comfortable in the action sequences. The music is average, with a few songs being hummable. In the end one feels Sunil Shetty is better in either action films or in good comedies like Hera Pheri.
Share. Save. Connect.
Tweet
KRODH SNAPSHOT

ADVERTISEMENT
This page was tagged for
Krodh movie ke story
krodh movie in hindi movies
sunil shetty krodh movie hindi
krodh movie review
krodh movie story in hindi
Follow @fullhyderabad
Follow fullhyd.com on
About Hyderabad
The Hyderabad Community
Improve fullhyd.com
More
Our Other Local Guides
Our other sites
© Copyright 1999-2009 LRR Technologies (Hyderabad), Pvt Ltd. All rights reserved. fullhyd, fullhyderabad, Welcome To The Neighbourhood are trademarks of LRR Technologies (Hyderabad) Pvt Ltd. The textual, graphic, audio and audiovisual material in this site is protected by copyright law. You may not copy, distribute, or use this material except as necessary for your personal, non-commercial use. Any trademarks are the properties of their respective owners. More on Hyderabad, India. Jobs in Hyderabad.