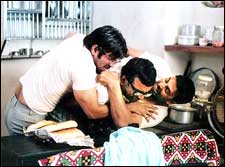 Neha Mathur / fullhyd.com
EDITOR RATING
6.0
Performances
Script
Music/Soundtrack
Visuals
NA
NA
NA
NA
Suggestions
Can watch again
NA
Good for kids
NA
Good for dates
NA
Wait for OTT
NA
What are the things that pop you to erupt into a frenzy of giggles? Pots of money gone poof? Now you're talking. It's all about the money. Phir Hera Pheri kickstarts with Hera Pheri's benign buffoons making merry with their fresh pennies, like a bunch of snooty squirts. These few moments of the beaming upstarts are short-lived, however - they quickly lose their shirts (and dhotis) to a con chit-fund company. Hah! Finally, we have our scruffy ruffians back, with their holed baniyans.

A somewhat worrisome aspect of a sequel is that its big daddy (Hera Pheri) might repeatedly butt in, taking away from the present experience. A big no-no would be Hera Pheri doing a vexing little jig at the back of your mind. Fortunately that doesn't happen here. Phir Hera Pheri holds its own, most of the time.

But real bad news hits them in the form of a 4-foot goon, Rajpal Yadav, whose big boss Sethji (Sharat Saksena) had lent him cash for Raju's enthusiastic investment scheme. And Sethji is a murderous mortal.

Our three amigos get roped in a quagmire of nettlesome hera pheris. Rajpal turns out to be Anjali's (Rimi Sen) brother. Who's Anjali? She happens to be the lass Raju bumped into on a bus ride. And now she's in trouble, thanks to Raju and gang. Our heroes want to escape from Sethji's death penalty. But the only trip they go on is a guilt trip.

After a quick spurt of moralistic bragging, the three Quixotic goofs take it upon themselves to rescue Anjali and give back Sethji's money. Reminiscent of Malamaal Weekly, a proliferation of characters spills onto the screen. Munnabhai (Johnny Lever) is an aspiring bhai who happens to be the three amigos' unfriendly neighbour. Then there's our usual drug don, who's also Munnabhai's rival. Then there's our usual drug don's usual double-crossing Peter.

Black bags stuffed with ganja, stolen antique guns and diamonds are stuff gangsta's dreams are made of. And stuff Phir Hera Pheri is made of. All the goons somehow (eavesdropping) reach Royal Circus, which is the appointed spot for all the dirty dealing.

A whole lot of physical gags lead to escape for our heroes and their damsels. They don't make any money, but are left with the three antique guns. Only, they are ignorant of the treasure they possess. Do they chuck the guns in the river? Hera Pheri 3, anyone?

A large portion of the laughs in Phir Hera Pheri come in the form of physical comedy. The smacking and tumbling over routine generates quite a few tiny tee-hees. The riot at the Royal Circus affords some hefty ha-has. Raju and Sethji stuck in a mirror maze becomes a silent Charlie Chaplin drill, and is good stuff. Everyone at the circus is like a looney ball out of control.

The verbal humor is funny even though quite a few of the wisecracks are pointless, or, worse, witless. There's a lisping Sethji, whose totla manner of speech evokes laughter. Talk literally becomes the source of humor. Even though many of one-liners lack fizz, the performances of the actors carry them through.

Paresh Rawal is the show-stealer. His comical eye-blinking, doltish look and langoti walk are precious. Both Akshay Kumar and Sunil Shetty are ace comedians in this film. Rajpal Yadav plays the harassed goon, par excellence. Bipasha Basu is forgettable, while Rimii Sen is a tad more noticeable.

The riveting plot is the mainstay of Phir Hera Pheri. The patchwork of multiple stories stitches up into a seamless whole. There is continuity in the way in which the profuseness of stories and characters gradually intersect at one point, the Royal Circus. Even the songs don't seem out of place. Maybe that's also because the tunes are catchy and melodious.

Phir Hera Pheri abounds in people pulling a fast one on other people. No one expects intelligence, either from you or from them. It's like the circus that comes to town, and everyone buys a ticket, 'cos carnivals are fun.
Share. Save. Connect.
Tweet
PHIR HERA PHERI SNAPSHOT

ADVERTISEMENT
This page was tagged for
phirherapheri2fullmoviemp4download
phir hera pheri 2 movie mp4
phir hera pheri full length movie download
Phir Hera Pheri hindi movie
Phir Hera Pheri reviews
Follow @fullhyderabad
Follow fullhyd.com on
About Hyderabad
The Hyderabad Community
Improve fullhyd.com
More
Our Other Local Guides
Our other sites
© Copyright 1999-2009 LRR Technologies (Hyderabad), Pvt Ltd. All rights reserved. fullhyd, fullhyderabad, Welcome To The Neighbourhood are trademarks of LRR Technologies (Hyderabad) Pvt Ltd. The textual, graphic, audio and audiovisual material in this site is protected by copyright law. You may not copy, distribute, or use this material except as necessary for your personal, non-commercial use. Any trademarks are the properties of their respective owners. More on Hyderabad, India. Jobs in Hyderabad.