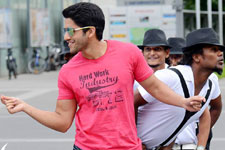 Deepti Girotra / fullhyd.com
EDITOR RATING
5.0
Performances
Script
Music/Soundtrack
Visuals
4.0
3.0
4.5
5.0
Suggestions
Can watch again
No
Good for kids
No
Good for dates
Yes
Wait to rent it
Yes
Karthik (Naga Chaitanya) is the happy-go-lucky, smart, intelligent and handsome (no kidding - they have every girl in the film say that) son of affluent parents (Suman and Sudha), who has just topped his class at a prestigious management school. On graduation day, Karthik realizes that life is just passing them all by and he doesn't want to get into the grind of landing a hi-profile job, getting married and having kids just yet. So he tells his father that he needs a year to discover himself, and sets off on an all-expenses-paid trip to some of the most happening places in Europe.

One song later, he returns to India and sees the beautiful, innocent, ultra-feminine Nandana (Pooja Hegde), ruining her pretty pink dress to protect little schoolgirls in their school uniform from a muddy puddle. So Karthik falls in love with Nandana who is very much Daddy's (Sayaji Shinde) li'l girl in word and deed.

Now Karthik, thanks to all the self-discovery he did on that Europe trip, starts to write a book about... yes, his love for Nandana - "Oka Laila Kosam" - while looking for his real 'Laila', and also does an impressive job of playing match-maker and part-time bodyguard for all his friends. While his father keeps giving him ultimatums to get his life in order.

Nandana misconstrues one of Karthik's match-making endeavors for a friend, and thinks he is a no-good flirt, who falls in love with every girl he sees. Karthik follows her around, and she in turn says that she doesn't like him, yet gets offended when he doesn't pay her any attention. Around this time, Pandu (Ali) joins the gang as Karthik's uncle, to give you a few titters (laughs are reserved for when Pooja Hegde tries to look emotional).

By this time, both the fathers in the story have had enough (well, someone had to), and decide to get their respective children married. On pelli-choopulu day, Nandana and Karthik come face-to-face with each other and are shocked. (Oh wait! Was this a spoiler?)

The story of Oka Laila Kosam, written by the director himself, is quite simple, but has been twisted around enough to give you a head-spin by the time you exit the cinema. The nagging question remains - if Karthik had to come back to India and eventually spend more than half the movie just trying to get married, why did he run away in the first place? Like the movie, there's probably no point to it. But the screenplay could still have been tighter, and the movie shorter by about 30 minutes.

Naga Chaitanya does not do anything extraordinary, but fights well, dances well, and plays the usual lover-boy hero well enough. Pooja Hegde, looks, sounds, dances, acts and pouts like most Telugu film debutantes do. Suman, Sayaji Shinde, Annapurna, Sudha, Shyamala, Ali, Posani (really entertaining even in the short time he's on screen) and the other supporting cast stick to their briefs, which they are all more than capable of given they've been doing the same in dozens of movies.

The music and background score, by Anup Rubens, are unimaginative. Except for the title song (a remix of the song Oka Laila Kosam from the ANR film Ramudu Kadu Krishnudu) and the song Oh Meri Jaanejana, the soundtrack doesn't have anything catchy on it. Cinematographer I Andrews gives you some good views of Switzerland.

If you like watching love stories that have some very unnecessary twists and songs, but just about enough comic tracks to last you to the climax, "Oka Laila Kosam" is playing in theatres at most of the convoluted roads of Hyderabad.
Share. Save. Connect.
Tweet
OKA LAILA KOSAM SNAPSHOT 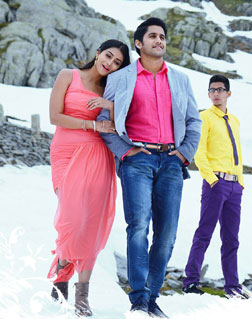 ADVERTISEMENT
This page was tagged for
oka laila kosam movie in hyderabad
Oka Laila Kosam telugu movie
Oka Laila Kosam reviews
release date
Naga Chaitanya, Pooja Hegde
Follow @fullhyderabad
Follow fullhyd.com on
About Hyderabad
The Hyderabad Community
Improve fullhyd.com
More
Our Other Local Guides
Our other sites
© Copyright 1999-2009 LRR Technologies (Hyderabad), Pvt Ltd. All rights reserved. fullhyd, fullhyderabad, Welcome To The Neighbourhood are trademarks of LRR Technologies (Hyderabad) Pvt Ltd. The textual, graphic, audio and audiovisual material in this site is protected by copyright law. You may not copy, distribute, or use this material except as necessary for your personal, non-commercial use. Any trademarks are the properties of their respective owners. More on Hyderabad, India. Jobs in Hyderabad.