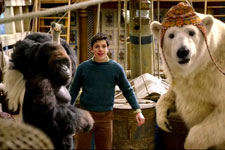 Punarvasu Pendse / fullhyd.com
EDITOR RATING
3.5
Performances
Script
Music/Soundtrack
Visuals
4.0
3.0
4.0
4.0
Suggestions
Can watch again
No
Good for kids
Yes
Good for dates
No
Wait to rent it
Yes
There are movies that are so bad that they are good. Self-righteous B-dramas can be campy fun, and badly-made flicks can be sniggered at without giving much thought towards their cinematic value. But it takes a mediocre film of a special kind to be bad enough to be annoying, but not so bad that it is brainless entertainment. And Dolittle squarely falls into the latter category.

Director Stephen Gaghan is an interesting choice to helm a children's movie, to say the least. Gaghan's screenplay for Soderbergh's Traffic won him an Academy award in 2000, and his most famous work as a director is Syriana, neither of which is a kid-friendly movie. We don't wish to be unkind here, but the fact remains that director Jonathan Liebesman needed to be brought in to make changes to this film.

Dolittle follows the events of the second book by Hugh Lofting - The Voyages Of Doctor Dolittle. It was even titled the same before it got changed to simply Dolittle. Doctor John Dolittle (Robert Downey Jr.) has retreated to the privacy of his animal-filled estate saddened by his wife Lily's untimely death. A messenger from the Queen of England brings forth royal summons, and the doctor has to get out of his state of stupefaction to save the life of his liege.

Off sets the doctor on his voyage - with a lot of his animals in tow, and new-found, self-appointed assistant Tommy Stubbins (Harry Collett). Braving dangerous enemies like Dolittle's rival Dr. Blair Müdfly (Michael Sheen) and the pirate Rassouli (Antonio Banderas), Doctor Dolittle sails to an island that cannot be seen on maps to search for a fruit of the Eden tree - the only substance that can cure the queen.

When a film warrants changes in direction and plot after disappointing test screenings, you tend to expect a significant overhaul that fixes the mess. Dolittle, au contraire, manages to go further astray. Even the patch-up work wasn't enough to save Dolittle's sinking ship (no pun intended). The central premise is solid - a doctor who can communicate with animals deciding to use his abilities for the betterment of both humans and animals. The execution, however is lacklustre - and that is putting it mildly.

To start with, the plot makes little sense - it feels like a patchwork of different scenes hastily scrambled together, and would make any sane filmgoer wonder how basic storytelling is an issue anymore, leave alone for a movie budgeted at an astonishing $175 million. We are genuinely thankful because the movie is just over a hundred minutes, because even sitting twenty more minutes (to round up to an average 2-hour runtime) would have been unbearable.

The comedy is seriously lacking, with moments of hilarity few and far between. Apart from the dragonfly James (Jason Mantzoukas), hardly any character is consistently funny. Fart jokes are actually an integral part of the climax - that's how low the movie sinks. Worse still, not a single dialogue uttered by the film's charismatic lead actor is memorable.

This is in fact the singularly most uninteresting performance I have ever seen from Robert Downey Jr. Easily the most bankable star in the world at the moment, RDJ could have picked almost anything after exiting the Marvel universe. It's genuinely puzzling why he chose this, especially because it is supposed to be a passion project! It's hard to say what is worse - his weird Welsh accent, the fact that he barely whispers in said weird accent during multiple scenes, or his uncharacteristic lack of enthusiasm. Maybe he could still have carried the film with his star power - alas, the shoddy plot makes even that impossible.

Collett is the usual sidekick, Müdfly is the typical antagonist, and Rassouli is part of the all-too-predictable twist. Fantastic actors like Michael Sheen and Antonio Banderas are completely wasted playing uninspired, generic characters.

The sole redeeming part of this movie are the cute animals it features. Plenty of famous actors have voiceover roles in Dolittle - with the gorilla Chee-Chee (Rami Malek), the polar bear Yoshi (John Cena), the ostrich Plimpton (Kumail Nanjiani) and the giraffe Betsy (Selena Gomez) to name a few featuring them. And there are problems in this department as well, because the animals seem disjointed from the main production. The primary focus of the movie is the doctor, so the animals are not always enough for the audience to care about.

The music, by Danny Elfman, is decent - we have some instances where the music adds to the moment, especially on the high seas. Sia wrote an original song for the film - the song is literally titled Original - that is very hummable. At this point, though, it is too little, too late.

Robert Downey Jr. is a powerhouse of talent, and has previously been lauded for performances even in ultimately disappointing movies. This time, however, the veteran actor is as unwatchable as the rest of the movie. 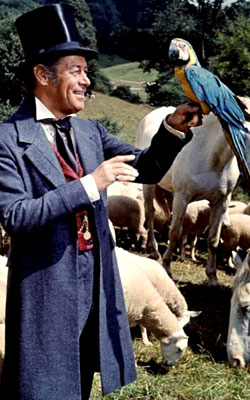 ADVERTISEMENT
This page was tagged for
Dolittle english movie
Dolittle reviews
release date
Robert Downey Jr, Harry Collett
theatres list
Follow @fullhyderabad
Follow fullhyd.com on
About Hyderabad
The Hyderabad Community
Improve fullhyd.com
More
Our Other Local Guides
Our other sites
© Copyright 1999-2009 LRR Technologies (Hyderabad), Pvt Ltd. All rights reserved. fullhyd, fullhyderabad, Welcome To The Neighbourhood are trademarks of LRR Technologies (Hyderabad) Pvt Ltd. The textual, graphic, audio and audiovisual material in this site is protected by copyright law. You may not copy, distribute, or use this material except as necessary for your personal, non-commercial use. Any trademarks are the properties of their respective owners. More on Hyderabad, India. Jobs in Hyderabad.