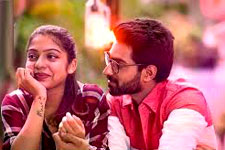 Neema Pramod / fullhyd.com
EDITOR RATING
6.0
Performances
Script
Music/Soundtrack
Visuals
6.0
5.0
5.0
6.0
Suggestions
Can watch again
No
Good for kids
No
Good for dates
Yes
Wait for OTT
No
You will notice that you can increasingly tell how a movie will turn out to be from the way the title card is designed. Of late, more and more people have come to realize the power a title card holds, which has in turn led to the trend of "title first look" posters coming out months before the release of a film.

The title card of Choosi Choodangane appears in a pinkish-white background, accompanied by a breezy tune. The font has a small touch of calligraphy. All these elements come together and create a pleasant but familiar feeling in your heart. And this feeling is exactly what Choosi Choodangane turns out to be - a rom-com which is pleasant and welcoming, but nothing exceptional or new.

Siddhu (Shiva Kandukuri) wants to be in the creative field, but his overbearing mother (Pavitra Lokesh) pushes him into joining an engineering college. It is here that he meets and experiences first love with Aishwarya (Malavika Satheesan). But when their relationship falls apart due to reasons Siddhu fails to understand, he decides to take a stand and pursue his passion - photography. It is at this juncture that he meets Shruti (Varsha Bollamma), a musician. The two hit it off well, and Siddhu soon finds himself falling for her, until it is revealed that Shruti has more to her than she lets on.

The story here is almost the same as that of every other rom-com ever made. Boy and girl fall in love, misunderstandings creep up, they break up, they mope around, and they eventually find a way out of that mess. But what actually make Choosi Choodangaane appealing are the small moments of surprising depth and emotion that are woven into the narrative.

This is one of those rare Telugu films written and directed by a woman (Sesha Sindhu Rao), and it is evident in the way the female characters are conceived and written - especially Shruti. For once, our heroine is passionate about something other than the man in her life, without the film putting in her a place where she is conflicted between the two or where the man helps her achieve her dream. She also parties and has heart-to-hearts with a wonderful set of male friends, and even gets to narrate her love story from her perspective. And most importantly, she is allowed to be a flawed woman and make mistakes.

Even the other female characters, like Siddhu's mother, are not turned into caricatures, though the character of Aishwarya could have used a little more depth. The male characters around the protagonist are interesting as well. Take Siddhu's father, for example - a house-husband who tries to diffuse the arguments between mother and son with cups of tea or plates of food, something the mothers in our movies have been doing since time immemorial.

However, our protagonist himself gets the short end of the stick. In comparison to that of Shruti, Siddhu's character arc seems quite weak. He was a confused soul at the beginning of the film, and remains one at the end.

The movie also manages to take you by surprise more than once. Each time you think the story is getting too predictable, there comes a small twist that catches you off-guard. Certain characters might appear to be behaving oddly in the beginning, but as the film unfolds, you begin to understand why they did what they did. Sometimes even a seemingly casual dialogue uttered by a character turns out to have had a reason for being there.

The problem with Choosi Choodangaane is that it wants to be two things at once - a charming rom-com as well as a launchpad of sorts for Shiva Kandukuri. The latter could explain why even a film helmed by a woman has dialogues like "whether it is the fault of the woman or the man, the man always has to say sorry". The way these dialogues come and go in the movie gives the sense of a bandage being ripped off, indicating that they were just thrown to create a whistle-worthy moment or two for the audience in an otherwise dignified film.

And then, of course, there is the languid pace, which means this film might not be for everyone - especially since it lacks commercial elements such as fights and dances. Moreover, once Shruti's side of the story is revealed, the film gives you nothing to look forward to.

As for the performances, Shiva Kandukuri is decent in his debut. He is passable in the lighter moments but appears awkward in the more emotional scenes. Nevertheless, he should be lauded for choosing to debut in a film where the focus is as much on the heroine as it is on him, and where he does not get to send ten men flying in the air with one kick.

It is Varsha Bollamma who walks away with the movie with her wonderfully expressive face and her capability to be natural in front of the camera. She has a very effervescent presence which makes it hard to look away from her. Malavika Satheesan, too, makes a mark in a brief role. The rest of the cast is good enough, too.

The film is very easy on the eyes (the cinematography is by Vedaraman and Raviteja Girijala). There is also a lot of detailing in the visuals which might go unnoticed by many. Shruti's bedroom wall, for example, has posters of Bohemian Rhapsody and Nirvana, among others (remember, she is a musician). These small details make the movie feel even more real and convincing.

Despite its problems, Choosi Choodangaane makes for a charming romance with an interesting female lead. The fact that it is written and directed by a woman becomes all the more reason to applaud it, if only to encourage more women to follow her footsteps.
Share. Save. Connect.
Tweet
CHOOSI CHOODANGANE SNAPSHOT 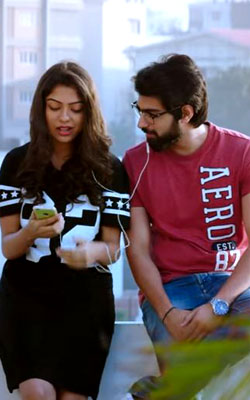 ADVERTISEMENT
This page was tagged for
choosi choodangane telugu moie
Choosi Choodangane telugu movie
Choosi Choodangane reviews
release date
Shiva Kandukuri, Varsha Bollamma
Follow @fullhyderabad
Follow fullhyd.com on
About Hyderabad
The Hyderabad Community
Improve fullhyd.com
More
Our Other Local Guides
Our other sites
© Copyright 1999-2009 LRR Technologies (Hyderabad), Pvt Ltd. All rights reserved. fullhyd, fullhyderabad, Welcome To The Neighbourhood are trademarks of LRR Technologies (Hyderabad) Pvt Ltd. The textual, graphic, audio and audiovisual material in this site is protected by copyright law. You may not copy, distribute, or use this material except as necessary for your personal, non-commercial use. Any trademarks are the properties of their respective owners. More on Hyderabad, India. Jobs in Hyderabad.