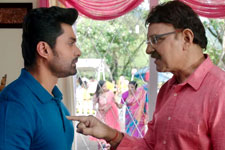 Chaitanya Karthik / fullhyd.com
EDITOR RATING
4.0
Performances
Script
Music/Soundtrack
Visuals
5.0
3.0
5.0
7.0
Suggestions
Can watch again
No
Good for kids
No
Good for dates
No
Wait to rent it
No
A movie is a medium where a group of fictional characters come together to create a connection between the movie and the viewer. That connection is formed through the emotions that the characters go through. It's these emotions that make it convenient for the viewer to ignore the line between reality and fiction. But here we have Entha Machivaadavura, where the viewers are aware that the characters are aware that the viewers are aware that the emotions are fake. It would have been great if this were a case of breaking the fourth wall, but sadly, it isn't.

Balu (Kalyan Ram), who loves people (that's the only thing mentioned on his CV), is orphaned as a kid when his parents die in an accident. Although he has abundant love for his relatives, they don't reciprocate that, and his father's friend (Naresh) takes care of him.

Naresh's wife doesn't appreciate that, and so Naresh has Balu admitted to a boys' hostel, where Balu starts fantasizing about having one large family. He sort of realizes that dream when he starts building relations with people, whose lives are filled with the voids created by the absence of their loved ones. He is basically networking with people without expecting them to give him a job, and this goes on to prove that he is not an IIM grad.

His friends are initially suspicious about what exactly he is doing, and spy on him. But when they eventually get to know what is really afoot, they just all look at each other and go, "Entha manchivaadu ra!" And along with Balu, they start an organization named "All Is Well Emotional Suppliers." And soon, you have people constantly contacting these guys, asking them to send people to fill the emptiness in their lives.

Things go well until one day Balu goes to an elderly man (Tanikella Bharani) as his son who went missing years ago. However, there are consequences here, and that forms the rest of the story.

On the one hand you have fake emotions, and on the other you have an overdose of sentimental scenes and preachiness, and it doesn't take someone bright to figure out how well they intertwine with each other. Vennela Kishore makes the second half slightly tolerable, but his character is limited in scope. You also have a backstory of Suhasini and Sarath Babu in the second half, because why be just bored when you can be bored to death?

When you have a mediocre script at your disposal, it's impossible to generate performances that set the screen on fire. The music too never elevates the movie, and is mostly relegated to the background. The visuals are the only good thing about Entha Machivaadavura, but unfortunately aren't anywhere near enough to salvage a lacklustre script.

Watch this movie only if you enjoy either Indian soap operas or torturing yourself. You may be able to rent almost any emotion from All Is Well Emotion Suppliers except peace of mind.
Share. Save. Connect.
Tweet
ENTHA MANCHIVAADAVURA SNAPSHOT 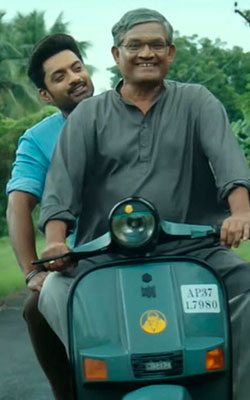 ADVERTISEMENT
This page was tagged for
endha manchivaadavura
Entha Manchivaadavura telugu movie
Entha Manchivaadavura reviews
release date
Kalyan Ram, Mehreen Pirzada
Follow @fullhyderabad
Follow fullhyd.com on
About Hyderabad
The Hyderabad Community
Improve fullhyd.com
More
Our Other Local Guides
Our other sites
© Copyright 1999-2009 LRR Technologies (Hyderabad), Pvt Ltd. All rights reserved. fullhyd, fullhyderabad, Welcome To The Neighbourhood are trademarks of LRR Technologies (Hyderabad) Pvt Ltd. The textual, graphic, audio and audiovisual material in this site is protected by copyright law. You may not copy, distribute, or use this material except as necessary for your personal, non-commercial use. Any trademarks are the properties of their respective owners. More on Hyderabad, India. Jobs in Hyderabad.