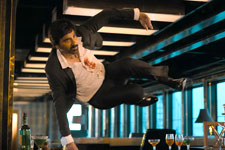 Chaitanya Karthik / fullhyd.com
EDITOR RATING
6.0
Performances
Script
Music/Soundtrack
Visuals
6.0
4.0
7.0
7.0
Suggestions
Can watch again
No
Good for kids
No
Good for dates
No
Wait to rent it
No
One advantage with science fiction is that it allows for outlandish concepts to exist in the realm of normalcy. This means a storyteller has enough leeway to experiment with a concept. However, storytellers can sometimes tend to even infuse a novel idea with clichés, and the eventual story might turn out to be underwhelming. Disco Raja belongs to this category.

The movie opens in Ladakh, where somewhere in the mountains is a man (Ravi Teja) lying unconscious on the ground, covered in blood and surrounded by a bunch of goons. At the behest of their boss, these guys drag his body to a house, tie him up there and leave him to die. But 35 years later, his body is found by a group of mountaineers in the exact state that it was in because, clearly, the director loved Captain America a little too much.

He is then taken to a lab where a doctor is conducting experiments which, if successful, can help cure, um, "death". So abracadabra - our hero is brought back from the dead. One natural question that a person who has been dead for 35 years should be asked is, "How is the afterlife?" Instead, the doctors (Tanya Hope and Vennela Kishore) start bugging him about who he is and where he is from, and of course, because that character has to be properly built up and elevated, he doesn't know who he is until it's the intermission.

He escapes from the lab, and you'd expect that somebody who last saw the world in 1985 would have an incredibly tough time navigating through the current version, but the director probably went "Ain't nobody got time for that!" Anyway, he faints, and thanks to a GPS chip implanted in his body, the doctors trace him and let him know that he is going to faint and probably die if he doesn't take his injection for the day.

He escapes the lab a second time by hitting a minister, and finds himself in jail. Now because he has hit a minister, and ministers are surrounded by the press, the video of him slapping said minister goes viral, and he has a blast from the past when he is released from jail. Apparently he has a score to settle with Burma Sethu (Bobby Simha), and he gets kidnapped by Sethu's goons. It is here that he remembers that he was - or is - Disco Raja.

Disco Raja leaves you in a bathtub of disappointment. The movie has multiple themes that are interesting - bringing people back from the dead, a person having his heart on the right side (the only purpose of this tweak is to explain why when the villain shoots Raja he doesn't die), post traumatic stress disorder, and cryogenics - but none of these concepts is properly explored. And when you don't explore a concept enough, you can't be honest about it, and it shows.

It's like VI Anand was watching the movies of Stanley Kubrick and Christopher Nolan while writing the script, and he probably wrote it in Telugu because this movie is riddled with Tollywood clichés: The "I can do anything and everything because I can" hero, punch dialogues that feel out of place, stupid stalking masquerading as romance, stupid jokes in the name of comedy... you name it and you have it in this.

Ravi Teja is pretty good as Disco Raja, and brings immense energy to the screen. It is only when he is yelling in English that wish you had waited to watch the movie on TV because you could at least change the channel. But otherwise, he has a great presence.

Neither Tanya Hope nor Nabha Natesh has anything much to do in the movie, to the extent that even if their roles were edited out, nothing much would change. Nabha can console herself that at least she has a song. Payal Rajput plays Disco Raja's love interest Helen, who is deaf and dumb. Although there was no need for that, her role is still relevant to the story.

You can't help but wonder what Bobby Simha was smoking while listening to the script. You would expect that a guy who has won a National Award for his acting would choose roles that have at least a little impact.

The other actors, well, they all win certificates of participation.

The visuals are great and make the screen look gorgeous, especially the retro ones. Thaman's music makes you groove to all the tunes and tap your feet while you're at it. The background score too elevates the mood and engages you in a secret tango with itself. But the screenplay uses multiple narratives to poor effect, and you can't help but feel that the director was undecided as to how to narrate this mediocre tale. The second half is surely a test of your patience, and you'd earn a Roadies Salute if you manage to remain normal by the end of the whole movie.

You'll need to have a high tolerance level for boredom and a propensity for suspending disbelief to enjoy Disco Raja. And yet most likely won't, anyway.
Share. Save. Connect.
Tweet
DISCO RAJA SNAPSHOT 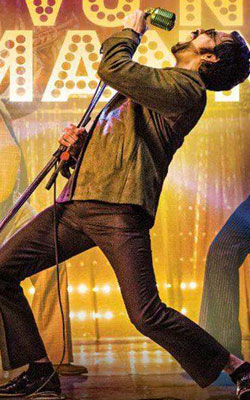 ADVERTISEMENT
This page was tagged for
Disco Raja movie show time in hyderabad
Disco Raja telugu movie
Disco Raja reviews
release date
Ravi Teja, Bobby Simha
Follow @fullhyderabad
Follow fullhyd.com on
About Hyderabad
The Hyderabad Community
Improve fullhyd.com
More
Our Other Local Guides
Our other sites
© Copyright 1999-2009 LRR Technologies (Hyderabad), Pvt Ltd. All rights reserved. fullhyd, fullhyderabad, Welcome To The Neighbourhood are trademarks of LRR Technologies (Hyderabad) Pvt Ltd. The textual, graphic, audio and audiovisual material in this site is protected by copyright law. You may not copy, distribute, or use this material except as necessary for your personal, non-commercial use. Any trademarks are the properties of their respective owners. More on Hyderabad, India. Jobs in Hyderabad.