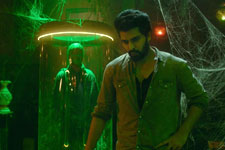 Chaitanya Karthik / fullhyd.com
EDITOR RATING
6.5
Performances
Script
Music/Soundtrack
Visuals
6.5
6.0
8.0
7.0
Suggestions
Can watch again
No
Good for kids
No
Good for dates
Yes
Wait to rent it
No
A few years ago, fans of the thriller genre would either indulge themselves in the worlds of Sidney Sheldon, Jeffrey Archer et al or seek refuge in Hollywood thrillers. Sure, Bollywood churns out a few thrillers occasionally, but it's hard to recall a Tollywood thriller that managed to keep you on the edge of your seat.

But we've recently seen a surge in the number of thrillers gracing the silver screen (should we thank Adivi Sesh for that?), and while not all of them managed to thrill us, we did have good leg-grabbers like Mathu Vadalara and Rakshasudu. Ashwathama, too, belongs to the same category.

Gana (Naga Shourya) returns from the US to be there for his sister's (Sargun Kaur) wedding. A couple of days before the event, he finds his sister trying to hang herself. She tells him that she is pregnant but has no idea how it happened. She goes to the hospital for an abortion, her fiancé (Prince) accompanying Gana and her. The wedding goes off without any hassle, and post that Gana goes after all the guys who hit on his sister and beats the daylights out of them, only to know that they had nothing to do with it.

As he is getting frustrated at not being able to get any breakthroughs, a woman jumps to death and falls on top of Gana's car. He goes to the police station regarding the insurance for his vehicle, and there, unexpectedly, he finds the leads that he didn't know he needed. He sees a pattern and realizes that there's more to everything than what meets the eye. The rest of the movie is about how he connects all the dots and where those lead him to.

Ashwathama manages to engage you for the most part. It has all the right ingredients to make a decent thriller. You have an unnerving premise, the gradual unravelling of the story, sub-plots placed strategically throughout the narrative, the right pacing, and characters that you actually care about.

What stops Ashwathama from becoming a great movie is the ending. If you can recall some of the greatest thrillers of all time like Hitchcock's Psycho, David Fincher's Se7en, Scorsese's Shutter Island or Jonathan Demme's The Silence Of The Lambs, what they all have in common is an incredible twist right at the end that no one saw coming. Ashwathama doesn't have anything like that.

Barring that, it's a fairly good movie. Naga Shourya is decent with his performance, and looks great in the action sequences. The way he portrays Gana's obsession about finding the truth one way or the other is the movie's biggest asset. However, he needs to improve his dialogue delivery. Mehreen is there only for a couple of songs, and although her character Neha does help Gana here and there, you can't really call it a meaty role.

Visually, Ashwathama could have been much better, and the production values are just about good. While Sricharan Pakala's music is okayish, Ghibran's background score is terrific and greatly enhances the experience of watching the film. The screenplay is engaging, too, and kudos to Naga Shourya, who has also written the script - he clearly has a different set of skills, too. Ramana Teja is a director to watch out for, and hopefully he will deliver some great movies in the future.

Ashwathama makes for a good one-time watch. If you are into thrillers and can digest a bit of gore, then you can give this movie a chance.
Share. Save. Connect.
Tweet
ASWATHAMA SNAPSHOT 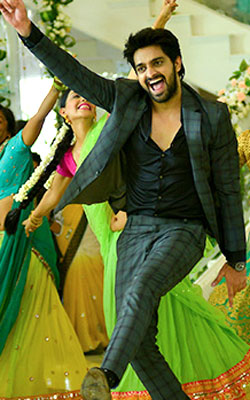 ADVERTISEMENT
This page was tagged for
Aswathama telugu movie
Aswathama reviews
release date
Naga Shourya, Mehreen Pirzada
theatres list
Follow @fullhyderabad
Follow fullhyd.com on
About Hyderabad
The Hyderabad Community
Improve fullhyd.com
More
Our Other Local Guides
Our other sites
© Copyright 1999-2009 LRR Technologies (Hyderabad), Pvt Ltd. All rights reserved. fullhyd, fullhyderabad, Welcome To The Neighbourhood are trademarks of LRR Technologies (Hyderabad) Pvt Ltd. The textual, graphic, audio and audiovisual material in this site is protected by copyright law. You may not copy, distribute, or use this material except as necessary for your personal, non-commercial use. Any trademarks are the properties of their respective owners. More on Hyderabad, India. Jobs in Hyderabad.