Chaitanya Karthik / fullhyd.com
EDITOR RATING
8.0
Performances
Script
Music/Soundtrack
Visuals
9.0
8.0
7.0
8.0
Suggestions
Can watch again
Yes
Good for kids
Yes
Good for dates
Yes
Wait for OTT
No
You know that when Kangana is playing the lead, the two things that you are assured of are a story that deviates from the typical Bollywood template and great acting. Although her last two outings were a tad disappointing, she still made sure she set the screen on fire with her presence. This time, too, you have a story that, despite redolent of a few biopics, is not your average mediocre drama. And yes, she shines like the star she is.

The movie opens with Jaya (Kangana) kicking her husband Prashant (Jassie Gill) in her sleep. The next morning you see him putting a hot-water bag under him. There is no fuss here. No complaints and no arguments. And in under a minute, the director manages to establish the characters of the story. Jaya, former captain of the Indian women's kabaddi team who still hasn't let kabaddi out of her system, and Prashant, the supportive husband who understands that.

Jaya is now working as a ticket clerk in the Railways, and has long given up her dream of playing kabaddi again. When her son Adi (Yagya Bhasin) was born, she was told that the kid was born weak and therefore needed someone to take care of him full-time. In an instant Jaya lets go of her dream of playing for the nation and devotes herself to taking care of her family. She occasionally indulges in nostalgia with her friend Meenu (Richa Chadda), and basks in the happiness of women playing kabaddi.

Although she loves the two people in her life, Prashant and Adi, she constantly carries the burden of wondering about what she could have been. One day after Jaya fails to come to Adi's event where he wins the third prize in running, he vents out his anger at her by shoving it in her face that she doesn't have an important job. Jaya is visibly hurt by that statement, and Prashant takes it upon himself to explain to Adi how Jaya sacrificed her dreams for the sake of family. And Adi wants his mother to make a comeback.

At first, Prashant thinks it is a crazy idea, but Adi pesters him constantly referring to all the greats who've made comebacks, like Serena Williams. Jaya thinks it is a silly idea, but decides to take the panga. And naturally, the fire that was doused seven years ago returns to her, slowly and gradually.

Yes, the story thereon is predictable. But Panga's strength is not in its story. It is in how it carefully evades melodrama at every turn. The characters are believable, and these are people you expect to find in the world you are in. And all the performances are amazing. Kangana as Jaya is the heart of the film, and completely dedicates herself to living the role. You don't feel like you are just watching Jaya's journey, you feel like you are a part of it. There is a scene when she tells her husband that she feels happy when she looks at him or their son. Only, she doesn't feel the same happiness when she looks at herself. This line is very much the soul of the movie, and it's hard to hold back your emotions here. The scene gently reminds you that Panga isn't just the story of Jaya - it is the story of every person who has stopped recruiting the notion of hope and has given in to adulthood.

Jassie Gill as the supporting husband who never forgets that Jaya could have been much more and doesn't ever take her for granted, is endearing. Yagya Bhasin has the funniest lines in the movie, and he delivers a solid heartwarming performance - especially in the climax, where you feel like you're in Adi's shoes for he echoes the sentiment in your heart. Richa Chadda reminds you of that whacky friend in the gang who keeps everyone smiling.

Even the sanctity of kabaddi remains intact in the movie because the Jaya's ramp-up feels natural and devoid of the over-the-top scenes that Bollywood tends to subscribe to. The writing is rooted in hope and optimism, and subtly nudges you to give in to your passion. It successfully drives home the point that the demands of motherhood need not get in the way of dreams.

The only complaint I have is that the music could have been better. But again, the performances never let you notice it.

Panga isn't a sports movie by any means. It is a movie about hope. Hope that resilience doesn't taper off with age. Hope that the right kind of love can trump every obstacle thrown at you. Hope that maybe we can still reignite a flame of passion that we've buried deep down in our hearts.

A charming, beautiful tale of overcoming the odds riddled with the essence of cotton candy, Panga is a delight that you wouldn't want to miss.
Share. Save. Connect.
Tweet
PANGA SNAPSHOT 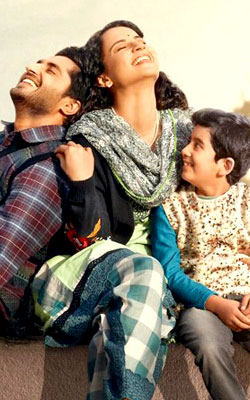 ADVERTISEMENT
This page was tagged for
panga movie review in hindi
Panga hindi movie
Panga reviews
release date
Kangana Ranaut, Richa Chadda
Follow @fullhyderabad
Follow fullhyd.com on
About Hyderabad
The Hyderabad Community
Improve fullhyd.com
More
Our Other Local Guides
Our other sites
© Copyright 1999-2009 LRR Technologies (Hyderabad), Pvt Ltd. All rights reserved. fullhyd, fullhyderabad, Welcome To The Neighbourhood are trademarks of LRR Technologies (Hyderabad) Pvt Ltd. The textual, graphic, audio and audiovisual material in this site is protected by copyright law. You may not copy, distribute, or use this material except as necessary for your personal, non-commercial use. Any trademarks are the properties of their respective owners. More on Hyderabad, India. Jobs in Hyderabad.