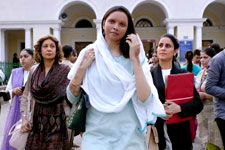 Punarvasu Pendse / fullhyd.com
EDITOR RATING
7.0
Performances
Script
Music/Soundtrack
Visuals
7.0
6.0
7.0
6.0
Suggestions
Can watch again
No
Good for kids
Yes
Good for dates
No
Wait for OTT
No
There is an excellent TEDx video on YouTube by Laxmi Agarwal, the woman on whose life Chhapaak is loosely based, where she talks about her harrowing ordeal in a very straightforward, matter-of-fact way - there is almost a nonchalance to her speech that belies the quiet inner strength she draws upon. It would be very remiss of us to not mention her talk - it is quite essential viewing, especially if Chhapaak is a film you're interested in.

For once, we have a film about women's empowerment that features the story of a woman, is made by women, and doesn't have a male superstar who unwittingly or not places all the attention upon himself. Director Meghna Gulzar squarely puts the focus on her characters, and neither the star power of her lead actress nor the difficulty of the topic at hand makes her change her vision. It is a hard-hitting story all right, but there's subtle compassion behind its handling that is evident throughout the movie's two-hour runtime.

Chhapaak gives the masses an insight into a survivor's reality. We find out that Malti (Deepika Padukone) was 19 years old when her face was forever scarred by an acid attack. A journalist-turned-activist (Vikrant Massey) who runs an NGO for acid attack survivors wants to get in touch with her years after her attack. A former colleague helps him track her down, and we first see a glimpse into her life through this interview.

Her inability to find employment due to her facial appearance is compounded by family issues, and her frank and sudden plea for a job during the aforementioned interview completely disarms the viewer. Malti's steadfast determination in the face of her grim reality shines though, and hope is the emotion that shines through it all.

Chhapaak is an onomatopoeic word - it is the sound of a splash. The playfulness of that word is however in direct contrast with the events this film depicts. It is a great introduction to the movie itself - it is a very grounded narrative that refuses to become inspiration porn for the most part. Malti is just your average person, and her hopes and dreams are ones shared by hundreds of young women across the country. Her condition doesn't take away from that - all it does is add another dream: to get the easy sale of acid banned in the country.

The treatment of Malti's character is also believable - her anguish when she sees her face in the mirror post operation for the first time is something most of the audience will not soon forget. Yet, there are only a couple of scenes where we see her break down. For the majority of the film, she moves on with her life, her quiet courage completely transcending any accusations of preachiness.

We live in a world where a majority of women are still valued by their appearance, and the toxic mentality of an attacker is what is given weight in Chhapaak, with the actual assailant given little to no attention. This is the stance that needs to be adopted more widely - we could do with a lot more attention to the bravery of the women who have been wronged, without making it a story of revenge. The enemy the film seeks to expose is the mentality of the society, one where an acid attack is thought of as the ultimate weapon to silence a woman.

Of course, Chhapaak is not a perfect film - far from it. The non-linear narrative provides an inversion - we see Malti post-attack for the majority of the film, after she has had multiple reconstruction surgeries (six or seven of them). While this decision successfully does away with any chance of melodrama, it also means that it is tougher for the audience to root for the protagonist. We see the origin story of the character only at the very end, when multiple similar stories have been already introduced due to her work with the NGO. This does take a little bit away from its impact.

Deepika Padukone is raw, and she is restrained - her Malti is a woman of few, albeit well-thought-out, words. This is arguably one of her best performances to date, aided perfectly by the minimalist approach the script takes. The only part of the movie where she feels unconvincing is her portrayal of a teenager - she seems too mature to play the part of even a late teen, although this isn't really her fault.

Vikrant Massey's gruff Amol is the perfect foil to Malti's subdued cheerfulness, his frustrated modern crusader only lacking a good introduction. We would have liked to know his background, and what motivated him to leave a journalist's job to work with acid attack survivors.

The music by Shankar-Ehsaan-Loy is a show of the same austerity that is evident in the rest of the film. There are only two songs, with lyrics by Meghna's father, the living legend Gulzar. Hard-hitting and without unnecessary fanfare, the title track is especially poignant.

There's a rather marked reference to "being afraid of the government" that prompted an ironic chuckle from yours truly, particularly with leading lady Deepika Padukone's recent activism in real life. From the fervent protests at the beginning of the film, or the grim reality that is existence for women in this male-dominated society, to the very soul-crushing acts of violence that are acid attacks - everything that is portrayed in Chhapaak is very real.

Yes, it is an important social film. But what makes Chhapaak way more, and ultimately watchable, is the fact that it is a delicately handled piece of film-making that offers a nuanced look at the person, while never being fixated at the heinous crime that affected her.
Share. Save. Connect.
Tweet
CHHAPAAK SNAPSHOT 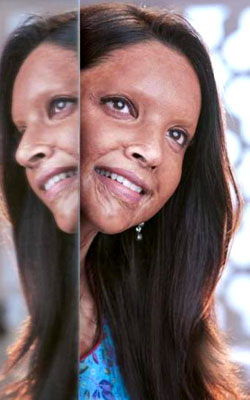 ADVERTISEMENT
This page was tagged for
Chhapaak fullhyd
Chhapaak hindi movie
Chhapaak reviews
release date
Deepika Padukone, Vikrant Massey
Follow @fullhyderabad
Follow fullhyd.com on
About Hyderabad
The Hyderabad Community
Improve fullhyd.com
More
Our Other Local Guides
Our other sites
© Copyright 1999-2009 LRR Technologies (Hyderabad), Pvt Ltd. All rights reserved. fullhyd, fullhyderabad, Welcome To The Neighbourhood are trademarks of LRR Technologies (Hyderabad) Pvt Ltd. The textual, graphic, audio and audiovisual material in this site is protected by copyright law. You may not copy, distribute, or use this material except as necessary for your personal, non-commercial use. Any trademarks are the properties of their respective owners. More on Hyderabad, India. Jobs in Hyderabad.