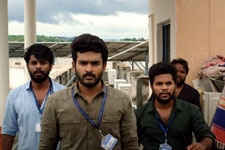 Anil Bandhakavi / fullhyd.com
EDITOR RATING
5.0
Performances
Script
Music/Soundtrack
Visuals
5.0
4.0
6.0
6.0
Suggestions
Can watch again
No
Good for kids
Yes
Good for dates
Yes
Wait for OTT
Yes
Life is a mixed bag of emotions. Nothing makes this clearer than the process of coming of age. For every exciting prospect, there is an inexplicable hurdle. The burdens of others' expectations prove to be quite unavoidable. And you realise that relationships are mostly there to be managed and seldom enjoyed. SR Kalyana Mandapam, directed by Sridhar Gade, shows these dull realisations play out in the life of a youngster exiting the carefree world of college to take on the bigger obligations of life.

Kalyan (Kiran Abbavaram), a third-year college student, is madly in love with Sindhu's hips, and by extension he's in love with her. Sindhu (Priyanka Jawalkar) is not new to male attention, and so Kalyan is just a chronic annoyance to deal with between lectures. However, Sindhu's reproach of Kalyan's courtship seems more like a test of his persistence. At the same time neither one really seems to want the other that badly. The affair is quite juvenile. Also, Kalyan has other matters taking up his thinking time.

Kalyan's father, Dharma (Sai Kumar), is not a happy man. He is constantly bashed by Kalyan's mother (Tulasi) for his insufficiencies. He's known to have run the family legacy, SR Kalyana Mandapam, the most popular wedding hall in town at one time, into the ground. On top of that, his strained relationship with Kalyan often irks him when he's sufficiently under the influence of his daily dose of booze. Screw everyone else, but losing his son's admiration is baffling and hard to stomach.

Kalyan, too, is clearly distressed by his own inability to show his father any love. And so along with three of his close buddies he decides to leave college to invest time into reviving SR Kalyana Mandapam. Along the way, Sindhu gets engaged to another man, and Kalyan has to reel her back into his life. His father's constant apathy continues to frustrate him. Clearly, his entry into adulthood is dominated by the bitter flavours of life. However, he might just be more focused and determined than his conflicted disposition suggests.

SR Kalyana Mandapam attempts to keep things very real. The peculiar nature of its plot shows how strange average people's life stories can be if we dig in for details. Often, your neighbour's life is crappier than you think. The movie is not embellished by any fantasy elements that you'd expect from a mass film. It depicts the predicaments of a youngster who's making a full entry into the real world.

But the film lacks gravity and intensity. The story passes you by like a collection of ongoing events without really managing to create much anticipation. The feel-good moments are mildly funny, and the multiple sub-plots get a little lost in each other's backgrounds as the movie progresses.

Kiran Abbavaram doesn't necessarily stand out as undeniable, and sort of comes off as a regular guy. Priyanka Jawalkar doesn't have much to work with in her character. The sluggishness of the story is also visible in the performances.

The cinematography is clean, and keeps the "real" flavour quite obvious. And an artsy background score proves to be a suitable pick for the storyline.

A lack of novelty or any striking uniqueness, a failure to be unpredictable, and a missed attempt at good humour, make SR Kalyana Mandapam a hard-sell - this one's just a "not bad", and worthy of just an OTT watch.
Share. Save. Connect.
Tweet
SR KALYANA MANDAPAM SNAPSHOT 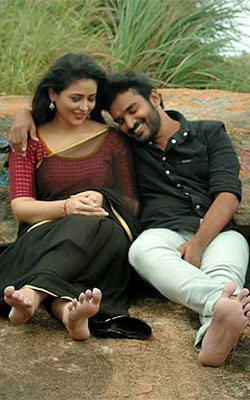 ADVERTISEMENT
This page was tagged for
SR Kalyana Mandapam telugu movie
SR Kalyana Mandapam reviews
release date
Kiran Abbavaram, Priyanka Jawalkar
theatres list
Follow @fullhyderabad
Follow fullhyd.com on
About Hyderabad
The Hyderabad Community
Improve fullhyd.com
More
Our Other Local Guides
Our other sites
© Copyright 1999-2009 LRR Technologies (Hyderabad), Pvt Ltd. All rights reserved. fullhyd, fullhyderabad, Welcome To The Neighbourhood are trademarks of LRR Technologies (Hyderabad) Pvt Ltd. The textual, graphic, audio and audiovisual material in this site is protected by copyright law. You may not copy, distribute, or use this material except as necessary for your personal, non-commercial use. Any trademarks are the properties of their respective owners. More on Hyderabad, India. Jobs in Hyderabad.