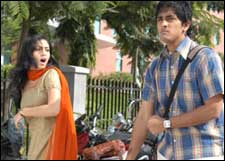 C Venkatesh / fullhyd.com
EDITOR RATING
7.0
Performances
Script
Music/Soundtrack
Visuals
NA
NA
NA
NA
Suggestions
Can watch again
NA
Good for kids
NA
Good for dates
NA
Wait for OTT
NA
Chukkallo Chandrudu is one of those "of the teens, by the teens, for the teens" things. No, there are no 30-year-olds masquerading as 12th-class oddballs, nor are there any grotesque attempts at class-room humor. It's just that romance is the single lode this movie taps. Which teenage male would not like to be pursued by three pretty young women? And which teenage girl wouldn't like to be romanced by an attractive, young multi-millionaire?

The film is pure, entertaining fantasy. 2 hours of good-is-the-only-way-to-feel, romance-makes-the-world-go-round, laugh-and-the-world-laughs-with-you and other such wholesome emotions are carried with unflagging energy by Telugu filmworld's latest heart-throb, Siddarth.

There's not a whole lot of originality in the storyline. Things start in Dusseldorf, with indulgent grandparents (Akkineni Nageswara Rao and Waheeda Rehman) and their grandson Arjun (Siddarth) who is heir to a few 100 crores of wealth. The grandparents, of course, want the young one to wed. The young one, of course, resists stoutly.

You see, he knew the three when they were girls, and decides to cast his troth into the ring, full of assurance that the one who deserves it will get it. Sandhya (Charmme) is an aggressive SPCA and Greenpeace activist. Shalini (Saloni) is an up-and-coming tennis player. Shravani (Sada) is an indigent and trampled-underfoot medical student.

Swinging from woman to woman with his trademark abandon, the young Arjun maintains his smile, vivacity and good-cheer from the first frame to the last. Thankfully, there're only passing tributes paid to long-time movie clichés like the ailing older generation or the lusty louts bent on creating mayhem.

The movie is one long riot of color and dances. After a while, it's a little hard to tell the three uniformly-pretty heroines apart as they take it in turns to link arms time and again, strictly by rota, with the same hero. And if, by the middle of the movie, you can't tell which girl gets the guy, then you're either under 20 or a hopeless romantic.

ANR is typecast and does nothing to be original. Tanikella too doesn't bring much to his role as the nasty uncle. Charmme, Sada and Saloni are adequate. There are no great emotive challenges for them. In fact, there are precious few for anyone in this movie.

The humor line is carried by Siddarth and Sunil – who deserves to be ranked right up there as one of the best comedians in Telugu movies today. His sense of timing and his dialog delivery are outstanding, though his facial expressions could do with an occasional touch of restraint.

It's hard to imagine any other hero, except perhaps the young Aamir Khan, carrying this movie the way Siddarth does. He radiates energy and vibrance continuously without seeming false or tiresome. His sense of rhythm in the dances is amazing. Prabhu Deva makes a late and brief entry into the movie, and is matched step-for-step by this excellent young dancer.

It's a dead cert this movie will be compared with Siddardh's earlier superhit (Nuvvosthanante Nenoddantana). Don't make that mistake. Except for the young and rich hero who gets along famously with his family, and the reliance on humor, and with romance as the main theme, and the absence of violence, and... uh-oh, scratch that thought.

Forget comparisons. This is an enjoyable movie that provides a good time for the family. Middle-aged cynics will need an extra dose of patience, but who knows, it may even touch their romantic buttons.
Share. Save. Connect.
Tweet
CHUKKALLO CHANDRUDU SNAPSHOT

ADVERTISEMENT
This page was tagged for
chukkallo chandrudu movie
Chukkallo Chandrudu telugu movie
Chukkallo Chandrudu reviews
release date
Siddarth, Charmme
Follow @fullhyderabad
Follow fullhyd.com on
About Hyderabad
The Hyderabad Community
Improve fullhyd.com
More
Our Other Local Guides
Our other sites
© Copyright 1999-2009 LRR Technologies (Hyderabad), Pvt Ltd. All rights reserved. fullhyd, fullhyderabad, Welcome To The Neighbourhood are trademarks of LRR Technologies (Hyderabad) Pvt Ltd. The textual, graphic, audio and audiovisual material in this site is protected by copyright law. You may not copy, distribute, or use this material except as necessary for your personal, non-commercial use. Any trademarks are the properties of their respective owners. More on Hyderabad, India. Jobs in Hyderabad.