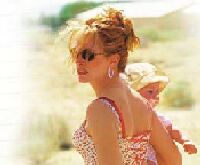 Feroz Hassan / fullhyd.com
EDITOR RATING
7.5
Performances
Script
Music/Soundtrack
Visuals
NA
NA
NA
NA
Suggestions
Can watch again
NA
Good for kids
NA
Good for dates
NA
Wait to rent it
NA
What do you expect from a typical Julia Roberts movie? Some chaos, some complications, witty one-liners, and a happy ending. In short, a feel-good movie. This too falls under that category, but Roberts herself takes on a radically different role. She isn't running into men (Pretty Woman), or running after them (My Best Friend's wedding), nor is she running away from them (Runaway Bride). In fact, she is already done with two of them by the time she is introduced to us.

Roberts plays Erin Brockovich, a down-on-her-luck woman, with three kids, seventeen thousand dollars in debt, seventy-four dollars in her bank account and no job. To make it worse for her she has got attitude, loads of it. Neck deep in crisis, she gets involved in a car accident. She approaches attorney Ed Masry (Albert Finney) to fight her case. He does, but they loose. All this while, Erin is on the lookout for a job. As a last resort, she asks Ed for one in his firm. While doing the job, she comes across some medical files mixed up with the real estate ones. Her curiosity aroused, she goes about investigating them.

She meets Donna Jensen (Marg Helgenberger), a woman with serious medical problems, who lives in Henkeley. While talking to her, Erin smells something fishy as all her medical bills have been paid by PG&E. She discovers that the company's facility has been using a pernicious kind of Chromium rust inhibitor in their facility, and that all their efforts in helping out the residents, are nothing but a part of an elaborate cover-up. Erin takes it upon herself to reach the bottom of the issue. Seeing the potential of the case, Ed joins in.

If on one hand her career is flourishing, on the other, her personal life is in shambles. Her kids grieve the lack of attention. Her boyfriend George (Aaron Eckhart), to whom she has trusted their care, cannot cope with her apathy towards him and her kids. The case itself turns out to be much more complicated than expected - what with another big firm joining them on it. With her intentions being thwarted and the betrayal of those afflicted on the cards, Erin has a real fight on her hands. In the end she makes it and the damages awarded to the residents of Henkeley are an unprecedented $333 million. And this, is a true story.

The movie is replete with brassy one-liners from Roberts and yet it manages to be a very serious one. Hats off to the director, Steven Soderbergh. Though not many reels are spent exploring the exact nature of the residents' plight, it is sufficiently highlighted through Erin's efforts. After all, it is her movie and the final victory is more or less her victory.

In Roberts' movies, there is no question as to who holds the centerstage. In this one, she carries herself with aplomb, aided to a great extent by some sharp dialogues. The filmmakers wouldn't give her anything else, would they? In the end, it is an unusual role for her with familiar strings to it. Mike Finney and Aaron Eckhart do the required, and though the latter didn't have much to do, he shows appropriate restraint doing it.
Share. Save. Connect.
Tweet
ERIN BROCKOVICH SNAPSHOT

ADVERTISEMENT
This page was tagged for
Erin Brockovich english movie
Erin Brockovich reviews
release date
Julia Roberts, Albert Finney
theatres list
Follow @fullhyderabad
Follow fullhyd.com on
About Hyderabad
The Hyderabad Community
Improve fullhyd.com
More
Our Other Local Guides
Our other sites
© Copyright 1999-2009 LRR Technologies (Hyderabad), Pvt Ltd. All rights reserved. fullhyd, fullhyderabad, Welcome To The Neighbourhood are trademarks of LRR Technologies (Hyderabad) Pvt Ltd. The textual, graphic, audio and audiovisual material in this site is protected by copyright law. You may not copy, distribute, or use this material except as necessary for your personal, non-commercial use. Any trademarks are the properties of their respective owners. More on Hyderabad, India. Jobs in Hyderabad.