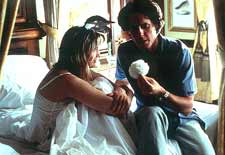 Mithun Verma / fullhyd.com
EDITOR RATING
7.5
Performances
Script
Music/Soundtrack
Visuals
NA
NA
NA
NA
Suggestions
Can watch again
NA
Good for kids
NA
Good for dates
NA
Wait for OTT
NA
As a 32-year-old single, all that Bridget (Renee Zwelleger) makes out of her life is the striking resemblance to the part played by Glenn Close in Fatal Attraction. In an honest narration, she unravels her entire pathetic life in a droll fashion. Her mother tries to set her poor spinster daughter up with a childhood friend of Bridget, Mark (Colin Firth), but he thinks that she's a real drip. And so she decides have a total personality change and promises to record every action in a diary.

Isn't that some premise for one of the best films in recent times? Bridget Jones' Diary is a must-see for anyone with a sense of humor that's evolved over howling away at Jim Carey's 687 different grimaces. What do 2 shows for the release of a classic in a city of population over 60 million tell you? Like we at fullhyd.com always say, give your own moral!

Anyway, here's how Bridget implements her own moral awakening. With a slightly revealing wardrobe, she catches the attention of her boss Daniel Cleaver (Hugh Grant), on whom she'd been having a crush for many years standing. They start flirting and finally end up where they both wanted to.

The beginning of the film is exceptionally witty, and has you smiling throughout if not wrinkling your laugh lines. The quaint humor definitely wouldn't appeal to people who think that a triangle with an angle of 135 degrees is called an obscene triangle, for a Fritz Herbert nicknamed Tits Pervert, a mom that gives her daughter a carpet to wear, Salman Rushdie in a guest appearance and a protagonist that finds fault with her undergarments are just a few of the things you'd find in this part of the film.

Bridget comes to know that her childhood friend (Mark) had shamefully bed the fiancé of Daniel and that increases her sympathy for him and dislike for Mark. After spending a weekend with the charming Daniel, she finds out that he actually wasn't interested in a serious relationship. Meanwhile Mark expresses that he had always liked her the way she was. Still hung up on Daniel, she's once again pushed back into the desperateness as he turns out to be a womanizer. When she finds out that in reality it was Daniel who had done that appalling act of sleeping with your best friend's wife, she gladly reciprocates to Mark.

A few reels are wasted on the boring love life of Bridget's mother and a silly little confrontation between Daniel and Mark. But for these, there aren't many glitches at all. The humor in the movie is all situational and down to earth. More like a Frasier than a Whose Line Is It Anyway?

Renee Zwelleger looks the part and perhaps will be remembered as Bridget for the rest of her life. Nice to see Hugh Grant actually playing the role of a semi-Casanova. It's usually him who plays the polite young man. Colin Firth is also outstanding as the charmless lover boy. The soundtrack has big names like Celine Dion and of course the mega hit "It's Raining Men" by the abs-girl Geri Halliwell.

Super direction by Sharon Maguire makes sure this movie qualifies for the must-see section. Helen Fielding's (he's the author of the book) brain will be proud of conceiving yet again. The movie perhaps is a little too turtle-paced for the liking of some, but it definitely wasn't made by or for humans with the knowledge of the earth making a resolution every 24 hours.
Share. Save. Connect.
Tweet
BRIDGET JONES' DIARY SNAPSHOT

ADVERTISEMENT
This page was tagged for
Bridget Jones' Diary english movie
Bridget Jones' Diary reviews
release date
Renee Zellweger, Gemma Jones
theatres list
Follow @fullhyderabad
Follow fullhyd.com on
About Hyderabad
The Hyderabad Community
Improve fullhyd.com
More
Our Other Local Guides
Our other sites
© Copyright 1999-2009 LRR Technologies (Hyderabad), Pvt Ltd. All rights reserved. fullhyd, fullhyderabad, Welcome To The Neighbourhood are trademarks of LRR Technologies (Hyderabad) Pvt Ltd. The textual, graphic, audio and audiovisual material in this site is protected by copyright law. You may not copy, distribute, or use this material except as necessary for your personal, non-commercial use. Any trademarks are the properties of their respective owners. More on Hyderabad, India. Jobs in Hyderabad.