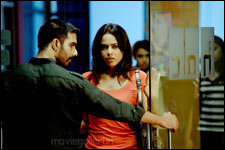 Deepa Garimella / fullhyd.com
EDITOR RATING
1.0
Performances
Script
Music/Soundtrack
Visuals
8.0
2.0
6.0
7.5
Suggestions
Can watch again
No
Good for kids
No
Good for dates
No
Wait to rent it
No
When, after 2 hours of what feels like third degree, Samantha Ruth Prabhu's 30-second appearance as a mentally-deranged asylum inmate cheers you up because of its sheer corniness, you know that here's a Gautham Menon film that should never have been.

Erra Gulabeelu is a movie about a sex-addict psychopath Samar (Veera) who turned out that way because his childhood was spent being abused by his paedophile father. A matronly neighbour Meenakshi rescues him and brings him up, only to have to thwart his forced advances upon her in her bedroom.

Life as a demented dysfunctional personality begins when he kills the man Meenakshi marries, in a gory episode that leaves Meenakshi alive but severely burnt. From here on, the audience is taken on one hell of an excruciating journey of one atrocity after another.

All this, when, in the end, the voice-over endlessly preaches about how mentally-ill criminals must be rehabilitated and not punished. The intense sympathy that Samar's childhood evokes is quickly wiped out as the film unfolds, causing you to only recoil in more and more repulsion.

There's nothing endearing about this schizzo brazenly and unapologetically speak about his acts, however traumatic his past was (in the first place, why was he, as a kid, not enrolled in a systematic treatment program to undo the damage to his psyche?)

It's hard to understand how Gautham Menon could have made a movie that capitalizes purely on the audience's revulsion, stripping the story of all emotional sensitivity possible. Samar is basically a raving mad brute who has no clue that he's in the wrong - and while it's impressive to see several nuances written into the character's psychosis, watching him go about his life is acutely grueling, to say the least.

There's no element of suspense, either. You know something terrible is going to happen soon, and all you're forced to do is grimace and bear the wait. Beyond a point, it's amusing enough to have audiences break out into peals of laughter - anything to break the monotony of the agony.

Veera is quite good in the rather intense role that he has, with a few amateurish facets that are still okay. Sameera Reddy is in a role that needs her to kick, weep and scream her lungs out (she's abducted by Samar to his creepy mansion and frightened out of her skin), and she pulls it off well. The woman playing Meenakshi (Swapna Abraham) is good, too.

And it's ridiculous the way Samantha has been used to flood the promos; she's just around for a menacing wink - if you're amazing enough to last till the end of the flick, that is.

The slick cinematography and the attention to detail show the Gautham Menon brand of filmmaking. That, however, doesn't change the fact that this one's the best step forward you can take towards a disastrous weekend.
Share. Save. Connect.
Tweet
ERRA GULABEELU SNAPSHOT


Pros: Camera
Cons: Rest
aswattha on 21st Feb 2011, 9:16pm | Permalink
The movie looks a bit inspired from The Psycho and it also looks more like a peek into the mind of a serial killer like Ted Bundy. Overall i would say the review is a lot harsh and i feel probably females wont like this movie very much. Definitely not a time pass movie. Be prepared to get disturbed if you want to see this movie.

ADVERTISEMENT
This page was tagged for
erra gulabilu full movie in telugu 2011 download
erra gulabi telugu movie 2011 online watch
erra gulabeelu 2011 full movie watch online
talugu gulabeelu sex movie
Erra Gulabeelu telugu movie
Follow @fullhyderabad
Follow fullhyd.com on
About Hyderabad
The Hyderabad Community
Improve fullhyd.com
More
Our Other Local Guides
Our other sites
© Copyright 1999-2009 LRR Technologies (Hyderabad), Pvt Ltd. All rights reserved. fullhyd, fullhyderabad, Welcome To The Neighbourhood are trademarks of LRR Technologies (Hyderabad) Pvt Ltd. The textual, graphic, audio and audiovisual material in this site is protected by copyright law. You may not copy, distribute, or use this material except as necessary for your personal, non-commercial use. Any trademarks are the properties of their respective owners. More on Hyderabad, India. Jobs in Hyderabad.