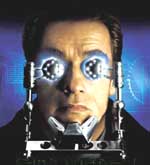 EDITOR RATING
6.0
Performances
Script
Music/Soundtrack
Visuals
NA
NA
NA
NA
Suggestions
Can watch again
NA
Good for kids
NA
Good for dates
NA
Wait to rent it
NA
Arnie should make up his mind. On the one hand he saves the world from eternal doom, as late as in End Of Days, and on the other he does an about turn to deny humans immortality. He may not be good enough to jump genres, but he sure does know how to jump sides. Anyway, we think that the world is ill prepared for clones, and so Arnie may just be on the right side.

Somehow, you just can't miss the double irony - intended or not - in the film's premise. A cloning company, 'Repet', offers to clone any pet within twelve hours of its death. By the way, these clones are ready replacements unlike the real ones, which start right at the beginning. The first irony pertains to Arnold - a hunched, wrinkled, sluggish shadow of his old self. Boy, do they need another Arnold! The second one is that these very wrinkles make him look a bit human. Not that anyone's looking for a vulnerable human in him.

In an age where 'nobody remains dead anymore' - at least the pets don't seem to - Adam Gibson (Arnie), a pilot, feels squeamish about getting a repet for his daughter. Some bad guys think better of it, so they have him cloned and shoot his friend Hank (Michael Rapaport) in an identity goof-up. They have Hank cloned, too. On finding his clone celebrating 'his' birthday, Arnie looses all appreciation of good roads and good old law.

Dr Weir (Robert Duvall) is a scientist working for Drucker who owns a secret lab for cloning humans. But most of the action is carried out by his 'resurrected' personnel. From here on it's the usual cat-n-mouse game with the stock twists.

Sure enough, there are a few explosions and punches and some bullets going off, but the action is surprisingly low-key. What we have, though, is humor that only Hollywood can attempt. Take, for instance, dialogues like, "Yeah, I'm Adam Gibson! I wish I could say the one-and-only," or "I haven't been myself lately." If you don't take it in the spirit of things (if you don't then I wonder what made you buy the ticket), you may just throw up at the shocking triviality of it.

Roger Spottiswoode, the director, finds himself fascinated with sundry gadgetry once more after Tomorrow Never Dies (but personally, I still prefer the good old revolvers to the rather unwieldy guns that fire laser beams). He strikes a balance between action and humor that makes for a typical Hollywood product - the fluffy variety. In a rather muddled conclusion, the two Adams reach some sort of understanding, which fails to clarify who's the actual Adam. Anyway, after over two hours in the theater, one would be just happy that it finally ended before it bored.
Share. Save. Connect.
Tweet
THE SIXTH DAY (HINDI) SNAPSHOT