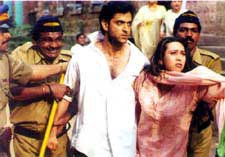 Feroz Hassan / fullhyd.com
EDITOR RATING
7.5
Performances
Script
Music/Soundtrack
Visuals
NA
NA
NA
NA
Suggestions
Can watch again
NA
Good for kids
NA
Good for dates
NA
Wait to rent it
NA
When a celebrated movie critic, known mostly for his finesse in shredding films apart, makes a film himself, you can't help wondering what he himself might have written about it. We start with a couple of lines of our perception of what Khalid would've had to say about Fiza had he himself not made it:

"Take a cauldron called riots, put in a star the nation is drooling over and 2 other talented actresses, garnish it with a promising storyline and great music, but stir with a ladle that's driven by the rival forces of a critic's sensibilities and box-office diktaks, and what do you have? A mish-mash of some emotional hodge-podge, intended focus on an unintended locus and great performances even in grating situations, and, on the whole, a good flick that could've been more slick." What say, Mr. Mohammed?

A showcase for the directorial abilities of Khalid Mohammed and the physique of Hrithik Roshan, Karisma's most challenging role to date and Jaya Bachchan's return to celluloid - Fiza tries be all these, while, most importantly, it also tries to make a poignant comment on the communal riots of the early nineties - in short, something for everyone. Boy, was that ambitious or what? Predictably, it doesn't quite do justice to all. Something that, if achieved, would have put it miles ahead of most other contemporary movies. Having said that, it doesn't leave you high and dry, either.

A great score, intense performances and taut direction - when not bogged down by a facile screenplay - combine to make this movie an emotionally-charged affair. But there is an inconsistency in this very emotional streak. It is built up properly, only to be lost to trite incidents, and is re-built with painstaking effort to meet the same fate all over again. You need to be patient with the film for it to hit the right notes.

Talking about notes, all the poignancy of the narrative has been derived from most of the songs, which turn out to be one too many in the end. Now where does that leave our high-profile director? I guess the box-office diktats were weighing heavily on him. How else does one explain a poor Fiza dancing in leather tights, just when we are set for an escalating climax?

As for the plot, it is a refreshingly different one - something that puts the angry young man in the backdrop of communal tensions, but then underplays the 'angry' bit for the most part. Amaan (Hrithik Roshan) goes missing in a communal riot, leaving his sister and mother (Jaya Bachchan) with nothing more than a vestige of a hope of his coming back.

Actually, this was meant to be a story of Fiza (Karisma Kapoor), the sister of this missing young man. But as the second half gets underway with Fiza bringing back Amaan (a little too easily for comfort), it is plain that there will be a shift in the equations. After all, the purported mission of Fiza has been accomplished, and it's now time to delve into the psyche of the other character. Doesn't matter as long as it makes for great drama. But no, it doesn't turn out as expected.

Though dramatic, the story never unravels the real dilemma of the guy. Is it guilt that is harking back from his past? Or is it fear? Whatever it is, it doesn't quite stop the guy from pulling himself deeper into the rot. The terrorist organization that adopts him is strangely secular in its claims, but it isn't clear as to what they are out to accomplish. In fact, the climax has our hero out on a mission to negate an unholy political nexus. Now this is done supposedly to avoid another communal uprising, but it seems to be the surest way to incite another.

The biggest let down is the part where Fiza is out looking for her brother. Coming up against characters (read politicians) that are convenient (convenience is often the name of the game here) take-offs on the real ones, she is made to mouth some all-too-familiar dialogues about the secular credentials of the country. It is to Karisma's credit that she stands out in the part. Making the best of an extended footage, she does well in the emotional scenes.

Hrithik looks the confident performer that he is, with appropriate shades of intensity. Jaya Bachchan is the real prize here, as she essays the role of tragic mother like very few have in the long history of Hindi cinema (don't bring Mother India in here). The point is that she is very believable, and credit should go to Khalid Mohammed for giving her ample scope in this movie.

As for Khalid Mohammed, he has definitely done a very good job for a first-timer, and he would be much the wiser about the nitty-gritty of making a film. Poor guy, one is forced to believe that he was under a lot of pressure to please everyone, apart from himself.
Share. Save. Connect.
Tweet
FIZA SNAPSHOT

ADVERTISEMENT
This page was tagged for
Fiza hindi movie
Fiza reviews
release date
Karishma Kapoor, Hrithik Roshan
theatres list
Follow @fullhyderabad
Follow fullhyd.com on
About Hyderabad
The Hyderabad Community
Improve fullhyd.com
More
Our Other Local Guides
Our other sites
© Copyright 1999-2009 LRR Technologies (Hyderabad), Pvt Ltd. All rights reserved. fullhyd, fullhyderabad, Welcome To The Neighbourhood are trademarks of LRR Technologies (Hyderabad) Pvt Ltd. The textual, graphic, audio and audiovisual material in this site is protected by copyright law. You may not copy, distribute, or use this material except as necessary for your personal, non-commercial use. Any trademarks are the properties of their respective owners. More on Hyderabad, India. Jobs in Hyderabad.