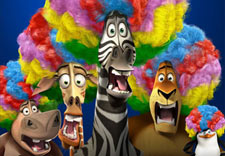 Shruthi / fullhyd.com
EDITOR RATING
6.5
Performances
Script
Music/Soundtrack
Visuals
7.0
6.0
9.0
8.0
Suggestions
Can watch again
No
Good for kids
Yes
Good for dates
No
Wait to rent it
No
Madagascar 3, set in Europe this time, is a much grander and larger adventure than its predecessors. There's action and new characters, and then there are great visuals to back it all up. But although one might welcome the largesse, it doesn't really fall into place, as the wit and the banter that were the charm of this series are traded for action and grandiosity.

Alex the Lion (Ben Stiller), Marty the Zebra (Chris Rock), Gloria the Hippo (Jada Pinkett Smith), and Melman the Giraffe(David Schwimmer) are back, and still trying to get home to New York. The movie starts in Monte Carlo, where these animals make enough noise to attract the attention of animal control cop Captain Chantel DuBois.

Captain Chantel DuBois' desire to add Alex's head to her private collection sets her resolutely on their trail, making way for some never-before-in-this-series action scenes. Captain Chantel DuBois, voiced by Frances McDormand, is the sinister new element of this movie, often falling short of evoking any real terror in her hurriedly-etched role.

Another aeronautic misadventure later, the foursome, along with their entourage - consisting of King Julien, Maurice and the penguins - now need to find a way to get to New York without getting noticed in Europe.

Enter a travelling circus en route to New York, which becomes the perfect foil to take them home. But before they get there, they'll have to ensure that the circus actually gets selected to go the US. And this sets the stage for another adventure for the four, as they take charge of the dwindling fortunes of the circus and its animals to transform it into their own version of Cirque de Soleil.

This is also the perfect setting for the makers of this piece to go all out on the visuals - the fireworks, the acts, the music - and they do it without as much as a moment of respite to let you take it all in. That's pretty much the pace of the movie - fast and action-packed - with everything packed tight into 90 minutes of frenzied adventure. The dialogues and the humor, that were the charm of its predecessors, are sort of relegated to the background, as the action and visuals take centre stage in this one.

The usual favorites, like the penguins and the monkeys, don't get anything too meaty to do in this one, and that's a bit of fizz gone right there. And the new characters - circus animals Vitaly and Gia - are more serious and less fun and wit. The music is good though, especially "I'm sexy and I know it".

For those of us who've loved the first two, this is probably a mild disappointment. This one doesn't quite captivate the adults the same way they did, almost making us step back and see it as just another animated movie with 4 animals on an adventure. But this still is something your kids will definitely enjoy.
Share. Save. Connect.
Tweet
MADAGASCAR 3 - EUROPE'S... SNAPSHOT
MADAGASCAR 3 - EUROPE'S MOST WANTED (3D) SNAPSHOT 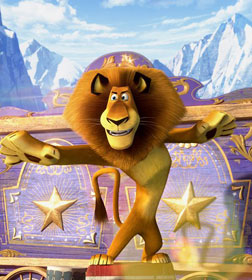 ADVERTISEMENT
This page was tagged for
Madagascar 3 - Europe's Most Wanted (3D) english movie
Madagascar 3 - Europe's Most Wanted (3D) reviews
release date
Ben Stiller, Chris Rock
theatres list
Follow @fullhyderabad
Follow fullhyd.com on
About Hyderabad
The Hyderabad Community
Improve fullhyd.com
More
Our Other Local Guides
Our other sites
© Copyright 1999-2009 LRR Technologies (Hyderabad), Pvt Ltd. All rights reserved. fullhyd, fullhyderabad, Welcome To The Neighbourhood are trademarks of LRR Technologies (Hyderabad) Pvt Ltd. The textual, graphic, audio and audiovisual material in this site is protected by copyright law. You may not copy, distribute, or use this material except as necessary for your personal, non-commercial use. Any trademarks are the properties of their respective owners. More on Hyderabad, India. Jobs in Hyderabad.