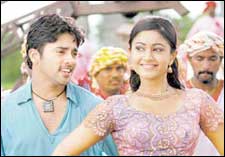 EDITOR RATING
5.0
Performances
Script
Music/Soundtrack
Visuals
NA
NA
NA
NA
Suggestions
Can watch again
NA
Good for kids
NA
Good for dates
NA
Wait to rent it
NA
"Modati Cinema" means different things in different languages, but loosely translated, it broadly means "if you can think of a better name, you should even have made this movie, smartass – and whoever taught you your manners should also have told you about your breath, you *%@ing #&^$%". The last two words are ancient Telugu swearwords which we decline to translate.

Going by the principle that an important pre-requisite to making movies is to start making them, Kuchipudi Venkat comes out with Modati Cinema, a gentle tale of youthful romance peppered with 6 tablespoons of humor per reel. Sriram (Navdeep) is a very rich 22-year-old whose occupation is to get young couples married against their parent’s wishes. Not random young couples, of course – young couples who are in love.

Sindhu (Poonam) is a beautiful and endearing middle-class girl with a step-mother who ill-treats her and makes her do all the household work. One night there is a huge party held by Sriram, and Sindhu’s step-mother and step-sister both go there, leaving her alone to do some extra chores in the grime of the kitchen. Sindhu is weeping alone at her fate, when suddenly a woman appears and identifies herself as Sindhu’s fairy godmother and quickly tells her to convert her pumpkins into chariots and mice into horses before somebody else loses her glass slipper at the party. Wait, we seem to be getting mixed up with some other script. This is what happens when you watch so many movies every week.

Anyway, Sindhu is generally tortured by her step-mother, and one day when she goes for an interview, she runs into Sriram, who falls in love at first sight with her. It’s always good to fall in love at first sight, since it generally feels nice when you do something in the fastest possible time. Luckily for him, Sindhu loses her pendant, and he follows her around to return it, and manages to spend a lot of time with her that day and get into her heart.

Before the very same day is over, however, Sindhu slaps him and walks away due to a misunderstanding. It is always hard when you get slapped by a girl, even if it is before the very same day gets over. However Sriram is undaunted, and decides that he’ll get Shirdi Sai Baba to intervene. And then Sindhu’s parents fix her marriage for the same night.

The film’s greater entertainment is all the comedy track, which has the entire pantheon on it – Sunil, Krishna Bhagavan, Brahmanandam, Venu Madhav, Ali, Raghubabu, L B Sriram, Telangana Sakuntala and Dharmavarapu Subrahmanyam. The take-offs on TV9 and ETV2 by Krishna Bhagawan are particularly amusing, and the gay role enacted by Raghubabu is fairly avant garde for Telugu cinema. The film has its share of vulgar jokes, especially the Ali - Venu Madhav bit, but the comic track is mostly entertaining.

Navdeep is fine, though small of build for a lead actor as we noted earlier. Somebody should tell him that it just takes some protein diet and 2 hours in the gym every day. Debutante Poonam is okay – kinda cute. The music is generally good, with the intro song Nenna Nedu and another song Neeke Nuvvu both having surprisingly good lyrics.

The film is a youth romance, and won’t give you nightmares or anything, but if you are just passing by the theater, you can continue along your way unmindful of the consequences.
Share. Save. Connect.
Tweet
MODATI CINEMA SNAPSHOT

ADVERTISEMENT
This page was tagged for
Modati Cinema
Modati Cinema telugu movie
Modati Cinema reviews
release date
Navdeep, Poonam
Follow @fullhyderabad
Follow fullhyd.com on
About Hyderabad
The Hyderabad Community
Improve fullhyd.com
More
Our Other Local Guides
Our other sites
© Copyright 1999-2009 LRR Technologies (Hyderabad), Pvt Ltd. All rights reserved. fullhyd, fullhyderabad, Welcome To The Neighbourhood are trademarks of LRR Technologies (Hyderabad) Pvt Ltd. The textual, graphic, audio and audiovisual material in this site is protected by copyright law. You may not copy, distribute, or use this material except as necessary for your personal, non-commercial use. Any trademarks are the properties of their respective owners. More on Hyderabad, India. Jobs in Hyderabad.