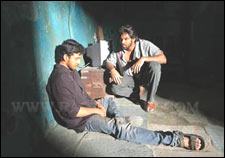 EDITOR RATING
5.0
Performances
Script
Music/Soundtrack
Visuals
NA
NA
NA
NA
Suggestions
Can watch again
NA
Good for kids
NA
Good for dates
NA
Wait for OTT
NA
Let’s face it – it was basically Chandramukhi, Aparichitudu and Ghajini. Only 3 movies from Tamil that worked big-time at the Telugu box-office in the last maybe 10 years. Not because we had suddenly developed an appetite for living through sorry dubbing or unintelligible scribbling in an alien language in our films, but since each of them had something really out of the ordinary in the tale which you simply did not get from Telugu directors (all 3 involved supernatural stuff); since each was really slick; and since each starred outstanding actors.

That experiment, however, seem to have impressed local businessmen enough to use the AP market like the last run of a sugarcane machine on a cane - to squeeze whatever little is possible from here out of a Tamil film that has already delivered the primary goods. So you have films like Aaru, Mazaa, Maha, Manmatha, Dhoolpet and more regularly hitting the screens, even if they are just the same run-of-the-mill stuff delivered by Telugu directors.

The deal is, if you have to sit through an alien starcast and Tamil written all over the place, the stuff needs to be something you cannot get here. Gaayam is certainly not that. It is, yes, just another Tamil dub (of Pattiyal). A film that might have had a good run in Tamil since it has some professional filmmaking and visuals, but provides nothing for a Telugu audience to persuade them to sit at one place for 150 minutes.

Siva (Bharat) is a deaf-and-dumb professional killer. He is best friends from childhood with Koti (Arya), a rugged drunk who’d adopted him when both were 6-year-olds. Together, they work with Swami (Cochin Haneefa), someone who gets them assignments to their hangout at a corner teashop.

Siva falls in love with Sandhya (Puja), an attendant at a pharmacy shop, and she too reciprocates unaware of his background. Koti is being pursued too, by Saru (Padma Priya), who takes long to manage to win the misogynist’s affections. The first half has all the characterization you need – nothing is happening except Siva courting and Koti spurning.

When Sandhya inevitably discovers what Siva does for a living, she simply cuts him off. The heart-broken Siva loses interest in everything, including his profession, and all of Koti’s attempts to get him to forget the girl do not work. Siva however agrees to do one last assignment which promises them big money – the murder of a high-profile person at Coimbatore.

Koti cannot make it with Siva since he gets into a problem locally, and the impaired Siva has to find his way around an unknown city. And Swami, who’s gotten them the contract, gets more money to add an extra specification to the feature-list for this assignment – both the killers have to be themselves killed after the assignment.

As just a stand-alone movie, Gaayam is good in parts. The relationship between Koti and Siva is done quite well, so much so that you are moved to tears when
Share. Save. Connect.
Tweet
GAAYAM SNAPSHOT

See Gaayam full details
GAAYAM USER REVIEWS
1 - 2 OF 2 COMMENTS
POSITIVE  |  NEGATIVE |  NEWEST  |  OLDEST  |  MOST HELPFUL  |  LEAST HELPFUL
USER RATING
6.1
15 USERS
Performances
Script
Music/Soundtrack
Visuals
NA
NA
NA
NA
Can watch again - NA
Good for kids - NA
Good for dates - NA
Wait for OTT - NA
Deepu Nivas on 8th Aug 2006, 5:37am | Permalink
Technically this is a good movie. It does nt matter tamil or telegu we just need guts to agree those guys south of us are too good. By the way you forgot Premiste and Pandam Kodi... Certainly I would imagine those movies made a lot of money. Right?
RATING
8
Deepak Nagaraj on 2nd Aug 2006, 1:25am | Permalink
another lame review from a fullhyd reviewer. what the heck do u mean by this?

" film that might have had a good run in Tamil since it has some professional filmmaking and visuals, but provides nothing for a Telugu audience to persuade them to sit at one place for 150 minutes"

now, does that mean that u think telugu audience are all lame uneducated people who cannot understand class, or is it that the quality of telugu films are too bad that they cant even be compared to tamils? please reply to that statement. it desrves an explanation.

and btw, this is a completely unprofessional way of writing a review. spoiler warnings are not given in the middle of the paragraph that too with plain text. they should be highlighted and that too mentioned at the start of the review that there are spoilers ahead. the warning given in this was so unnoticable that u get to spot it after reading the whole sentence. these are all basics which seem completely beyond ur understanding. its not only this review but many in the past where u have let out spoilers even without a warning. omkara is the recent example.donno when this crappy reviewing is going to end in fullhyd.

in school we had lessons when we had to review articles and movies and trust me, the reviews written by we 15 yr olds were far really better than the ones we get to read here. hire good reviewers, or stop writing them, but dont write such crap.

ADVERTISEMENT
This page was tagged for
Gaayam
gaayam telugu full movie download
Gaayam telugu movie
Gaayam reviews
release date
Follow @fullhyderabad
Follow fullhyd.com on
About Hyderabad
The Hyderabad Community
Improve fullhyd.com
More
Our Other Local Guides
Our other sites
© Copyright 1999-2009 LRR Technologies (Hyderabad), Pvt Ltd. All rights reserved. fullhyd, fullhyderabad, Welcome To The Neighbourhood are trademarks of LRR Technologies (Hyderabad) Pvt Ltd. The textual, graphic, audio and audiovisual material in this site is protected by copyright law. You may not copy, distribute, or use this material except as necessary for your personal, non-commercial use. Any trademarks are the properties of their respective owners. More on Hyderabad, India. Jobs in Hyderabad.