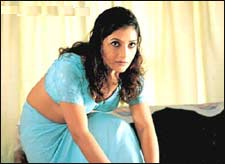 Mithun Verma / fullhyd.com
EDITOR RATING
3.0
Performances
Script
Music/Soundtrack
Visuals
NA
NA
NA
NA
Suggestions
Can watch again
NA
Good for kids
NA
Good for dates
NA
Wait for OTT
NA
There are certain elementary level concepts that you need to understand about navels, bellybuttons and cleavages before you watch Sorry Naaku Pellaindi. For all those who do not comprehend these complex concepts, this movie might come across as being a tad too much like any other vulgar sludge. The understanding of these concepts will make it look like a vulgar sludge, too, but not like any other vulgar sludge. Hence, we'll deal with the concepts as and when we come across them.

Raghu (Ravi Teja's kid brother) is a nice man. He doesn't mind people calling him a 'kid' in parenthesis right after his name. He doesn't mind people calling him a 'brother' as well, as long as those people do not have cleavages running deep enough to divide the earth into two halves (From # 23. A visible crack should never call you a brother). He also doesn't mind giving away huge sums of his money for helping people as long as they do not show him their bellybuttons. He marries the ones who do show him those. (From # 46. A belly in hand is worth two buttons in the bush)

As mentioned earlier, Raghu helps his friends (people who do not show him their bellybuttons) by donating huge sums of money to them without even finding out what they're doing. This is not a totally stupid thing to do. Anybody would pay up not to see those people. It so happens that when his wife meets with an accident, the same friends who borrowed from him shamelessly refuse to help him. His wife needs an operation but he has no money...

This was all in the past. Now, he's remarried and his new wife is very clever. Somehow, she exposes the true intentions of his so-called friends. Actually, she exposes to the true intentions of his so-called friends (From # 69. When in doubt, shed clothes. Preferably, yours). Having seen all the goods, each of Raghu's friends is so in love with his new wife, they start giving her lakhs of rupees in order to win her favors. But she still sticks to her tagline: Whatever you see is what you don't get. So they don't get anything.

All this while Raghu feigns ignorance. He looks completely clueless about what is happening around him. He's absolutely brilliant at this. Looking clueless is certainly his specialty, something he can definitely do better than his brother. Self-congratulating his achievements, he realizes that it's the time for the climax, so he reveals (not reveals as in how his wife is 'revealing') why his wife is behaving the way she is, and how dangerous it is to have friends like his in life.

The four lecher friends, played by Jeeva, Siva Reddy, Srinivas Reddy and Krishna Bhagavan, are not completely idiotic. They're half idiotic, half stupid and completely ridiculous. Ruthika, as the tempting mistress has done a good job. But unfortunately we cannot see that. All we can see is the good job done by various supple organs of her body.

In every department this movie coherently propels only one purpose - to promote bellybuttons that are big enough to have echoes in them. They've succeeded, too. Too bad they've not succeeded in making a movie. Vulgar documentaries can never pass for a movie.
Share. Save. Connect.
Tweet
SORRY NAAKU PELLAINDI SNAPSHOT

ADVERTISEMENT
This page was tagged for
sorry naaku pellaindi wiki
naku pellaindi movie actor name list
naaku pellaindi telugu movie
sorry naaku pellaindi
sorry! naaku pellaindi
Follow @fullhyderabad
Follow fullhyd.com on
About Hyderabad
The Hyderabad Community
Improve fullhyd.com
More
Our Other Local Guides
Our other sites
© Copyright 1999-2009 LRR Technologies (Hyderabad), Pvt Ltd. All rights reserved. fullhyd, fullhyderabad, Welcome To The Neighbourhood are trademarks of LRR Technologies (Hyderabad) Pvt Ltd. The textual, graphic, audio and audiovisual material in this site is protected by copyright law. You may not copy, distribute, or use this material except as necessary for your personal, non-commercial use. Any trademarks are the properties of their respective owners. More on Hyderabad, India. Jobs in Hyderabad.