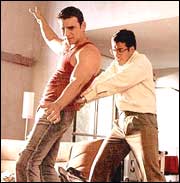 Deepa Menon / fullhyd.com
EDITOR RATING
5.0
Performances
Script
Music/Soundtrack
Visuals
NA
NA
NA
NA
Suggestions
Can watch again
NA
Good for kids
NA
Good for dates
NA
Wait to rent it
NA
The problem with the human race is that we don't actually want the things we think we want. For example, suppose a guy spent his whole life wishing he could fly. Let's say, one day he gets his wish. What does he do with it? Does he glide over the Arabian Sea, sweep across the Thar or circle the Artic Pole? No, chances are he'll try to impress his friends for a while, then sit at home and complain about air turbulence or noisy birds or the lack of cute women in the stratosphere.

So it figures that of all the things the hero of this film could have done when he became invisible, he chose to pull people's pants down. And for all its Mr. India potential, Gayab chooses to crack a couple of jokes and then drown the story in insipid drama and lots of cleavage.

Vishnu Prasad takes after his father - bespectacled, mild, and harassed to death. Ma Prasad is such a shrew, she would make Auschwitz seem like summer camp. And it's not like Vishnu (Tusshar Kapoor) gets much peace outside the house, either. He has no friends and the girl he loves doesn't know him from a doorknob.

One typical day after he's been beaten up by everyone in the vicinity, Vishnu rants at the heavens. He's so close to oblivion he might as well be invisible, he rants. So be it, say the gods and Vishnu is gone. First thing he does - camps in the girl's bedroom. And before you get any ideas, the director's already gotten them. An awkwardly oversexed song follows.

So when he's not teaching his mother a lesson or pulling people's pants down, Vishnu tries his darnedest to get Mohini (Mali's character) to fall in love with him. But some girls are impossible to please. Flowers won't do it, candy won't do it, two crores in stolen hard cash won't do it.

Vishnu is desperate now. After he robs the bank, he decides no more Mr. Nice Guy. So he issues an ultimatum to the befuddled police department - your Mohini or your life. Or something equally lame in its attempt at humor. But if you're in the mood for timepass thrills, you will guffaw occasionally. Only because the pulling-pants-down routine is a classic and, hence, always funny.

Tusshar Kapoor tries, he really does. That's about all you can say for the guy. The director, however, has everyone in this film hamming it, including the talented Raghuveer Yadav, while Antara Mali giggles and cavorts cluelessly.

Gayab scores mainly for slapstick, and the attempt at tugging your heartstrings is unnecessary. The movie is nowhere in the vicinity of Mr. India or even previous Factory product, Ab Tak Chappan. Lower your expectations for best results.

ADVERTISEMENT
This page was tagged for
gayab movie
Gayab hindi movie
Gayab reviews
release date
Tusshar Kapoor, Antara Mali
Follow @fullhyderabad
Follow fullhyd.com on
About Hyderabad
The Hyderabad Community
Improve fullhyd.com
More
Our Other Local Guides
Our other sites
© Copyright 1999-2009 LRR Technologies (Hyderabad), Pvt Ltd. All rights reserved. fullhyd, fullhyderabad, Welcome To The Neighbourhood are trademarks of LRR Technologies (Hyderabad) Pvt Ltd. The textual, graphic, audio and audiovisual material in this site is protected by copyright law. You may not copy, distribute, or use this material except as necessary for your personal, non-commercial use. Any trademarks are the properties of their respective owners. More on Hyderabad, India. Jobs in Hyderabad.