There are two kinds of romantic comedies: ones that compromise on the laughs, and ones that compromise on the mush. Love Actually is the first kind. Not because it doesn't have its shining moments of comedy, but because the aww-factor is much higher. This movie's hit theaters a week too late; it would've made a good Valentine date. Unless, of course, your girlfriend is a heavy-metal fan who thinks Hugh Grant is a floppy-haired idiot. In which case, fortunately for the makers, she's in the minority.

The film is many love stories tangled up and running into each other and surfacing bit by bit so you have just enough to keep you going. Hugh Grant plays the Prime Minister of Britain, who goes down in history as the first one to fall in love with a member of the 'domestic staff', and more importantly as the first one to stand up to an American President. 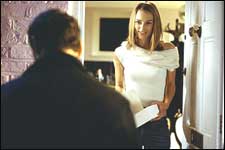 His sister Emma Thompson is a doting mother and dutiful wife, whose husband is cheating on her with a girl from his office. This diabolical 'other woman' has a friend, Mark, who runs an art-gallery and is in love with his best friend's wife Keira Knightly. Keira and her husband are also friends of Colin Firth, who goes to France to get over his unfaithful wife.

Back home, Emma's close friend, Liam Neeson, has just lost his wife and is getting to be friends with his 10-year-old stepson. The stepson is precocious and madly in love with a classmate from America. Also on his way to America is Kris (Colin Frissell), who is searching for love, eyes full of dreams and, optimistically enough, a rucksack full of condoms. And whaddya know, he does find a bevy of raging nymphs who fall over each other to give him a good time. 'Tis after all, the magical Christmas season. 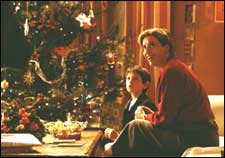 There. Hopefully, we've covered them all. All seeking, finding, losing, wrestling, playing drums, learning Portuguese and holding up placards for love. You know the minute it starts how each story is going to go, and the director's done a good job of not muddling them up. But then it isn't really a difficult film to follow. As mentioned earlier, there are comic gems, and Rowan Atkinson manages brilliance even in a ten-second role. Bill Nighy as Billy Mac is an incorrigible trash-mouth you'll love. And Hugh Grant is, well, Hugh Grant. He grins, blushes and plays adorable.

ADVERTISEMENT
This page was tagged for
Love Actually english movie
Love Actually reviews
release date
Alan Rickman, Bill Nighy
theatres list
Follow @fullhyderabad
Follow fullhyd.com on
About Hyderabad
The Hyderabad Community
Improve fullhyd.com
More
Our Other Local Guides
Our other sites
© Copyright 1999-2009 LRR Technologies (Hyderabad), Pvt Ltd. All rights reserved. fullhyd, fullhyderabad, Welcome To The Neighbourhood are trademarks of LRR Technologies (Hyderabad) Pvt Ltd. The textual, graphic, audio and audiovisual material in this site is protected by copyright law. You may not copy, distribute, or use this material except as necessary for your personal, non-commercial use. Any trademarks are the properties of their respective owners. More on Hyderabad, India. Jobs in Hyderabad.