Smriti Kashyap / fullhyd.com
EDITOR RATING
8.0
Performances
Script
Music/Soundtrack
Visuals
NA
NA
NA
NA
Suggestions
Can watch again
NA
Good for kids
NA
Good for dates
NA
Wait for OTT
NA
J R R Tolkien is one heck of a famous guy in Hyderabad - not because he has had a fantasy classic of a book called The Legends Of Middle Earth, but because he makes a surreptitious entry on page 242, word list 41 (Barron's). And while every Hyderabadi in the age group of 20-24 makes knowing noises, there might be a few clueless - and those are the educated three out of seven people who actually had the literacy (and patience) to go through the book.

For the rest of the Brady Bunch with no access to the Public Library, this flick is well worth the ignorance.

The movie, like the book on which it is based, is set in Middle-Earth - home to Dwarves, Humans, Wizards, Elves and Hobbits. What's a Hobbit? Well, it's almost like an 8-year-old, only with much hairier feet. Anyways, Hobbit Bilbo Baggins (Ian Holm) has in his possession 'the ring'! No ordinary ring this; you see, it is the ring that rules all other rings - the ring leader so to speak.

On his 111th birthday, Bilbo decides to take a journey into the woods (presumably to have his legs waxed) and hands all his worldly possessions over to his nephew, Frodo (pixie boy Elijah Wood). The ring, like we all probably don't know, has been 'forged by the Dark Lord Sauron in the fires of Mountain Doom'. A rather unfortunately titled place, but when you hear stuff like that, you know that there's bound to be trouble.

Now this is the same circlet that the Dark Lord must have to gain invincibility. Not one to give up without a fight, Frodo decides to penetrate into deep country (New Zealand to be precise), plunge the ring into fires, and thus vanquish Sauron.

Not a job to be done single-handedly, Frodo forms an alliance (the fellowship) with a good sorcerer (no! not Harry Potter!) Gandalph (Ian McKellen). Gandalph ropes in his elf pals, and thus arrives Legolaf Greenleaf (Orlando Bloom), a flaxen haired archer, and the paragon of human heroism, Aragorn (Viggo Mortensen). 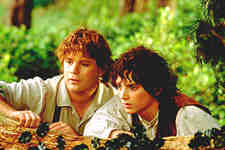 Aragorn's love interest is played by Liv Tyler, who hasn't seemed to have made an on-screen appearance after her dad's 100th birthday party. Anyway, considering that Hobbit land seems to be a boys-only club, there don't seem to be too many females around. The only other femme is once-upon-a-time Virgin Queen Cate Blanchett, who plays the elf queen Galadriel.

With the cast in place, over hill and dale go our intrepid team, encountering many opportunities to look more like pixels than people, to squelch the ring's evil, and to be chased by Ringwraiths - black cloaked figures who're neither alive nor dead (hmmm... sounds familiar).

This is when the popcorn packs go down with amazing speed as we all stare at some of the best visuals this side of the Atlantic. The movie chugs along purposefully, and we are drawn in from amazing scene to another.

There are also tons of weapons in this movie: swords and arrows and axes. Hey, you'd think folks who've mastered magic could whip up a gun or two!

Whatever your thoughts, there is one thing fershure - Lord Of The Rings rules the roost in terms of pokey-eyed heroes and lumbering anti-heroes. There is visual eye candy by the bagfuls, and the effect is stunning. And most amazingly, the story is second to none.

As this flick is the first part of a trilogy, there really isn't a concrete ending. Which means that the crowds that have been drooling during the flick will have to stock up on their drool for the next two films, due to be released over the next two years.

En fin, as Gandalph says, "We can't choose our time, we can only decide what to do with the time given to us."

These all the verses in the FULL.

RATING
10
Kiran Kumar on 3rd Apr 2002, 11:17am | Permalink
LOTR has got the ingredients that eluded "Harry Potter and the Sorcerer's Stone" - heart, soul and inspired direction by Jackson ("Heavenly Creatures"), working at eye-popping locations in his native New Zealand.

Even those who found Tolkien's books confusing will be riveted by the well-paced screenplay by Jackson, his wife Fran Walsh and rookie screenwriter Philippa Boyens.

It lays out Tolkien's complex history in a way that should please die-hards - yet, unlike the makers of "Harry Potter," Jackson doesn't let slavish fidelity to the text stand in the way of a rip-roaring good time. A must see !!

But my only major complaint about what's easily one of the year's best movies - is that we'll have to wait a full 12 months to see "The Lord of the Rings: The Two Towers."


RATING
10
Narayan on 31st Mar 2002, 9:46pm | Permalink
Over-rated, takes artistic liberties with the book.....but one heck of visual fantasy.
RATING
4
The Crackednut Nutty on 21st Mar 2002, 9:32pm | Permalink
Has no-one here read the book??? GGaaawwwd!! It's Gandalf the Grey,Legolas and i clearly remember it's not Mount Doom but Mount Duun--(ok! Their only spelling mistakes but still shows u didn't read the book,right?) NIce review and coulourful pics..atleast a whole lot better than that SILLY TOI sunday review.OK agreed,poor fellas couldn't do justice to more than 750 pages of detail in just 3 hours.and yes! ppl who haven't read the book start off with a SEVERE disadvantage than those who did.but all said and done the movie was AMAZING and something that ppl should sincerely appreciate. Sadly,when i watched it in Skyline on Sunday,the junta came in expecting a no-brainer sci-fi movie like "Matrix" or something.So i had to watch the proceedings with a whole lot of ppl welcoming Arwen and Glaldriel with familiar Hyderabadi 'mother-sister' expletives!! Secondly,another bunch of ppl go around praising the movie just bcos its "cool" and since everyone else is talking great about it,so must they!!! all said and done....LOTR 2 and 3 will certainly find this faithful follower rooting for it.-----------
With Regards,---The Crackednut ;->>>----
RATING
10
Aakash on 16th Mar 2002, 12:39pm | Permalink
beautiful movie. everybody should watch the movie. and also everybody should read the review. fullhyd should be changed to fullguide!
RATING
10
Ashok on 15th Mar 2002, 6:54pm | Permalink
nice lokking review. very colourful with four pictures
RATING
8
LEAVE A COMMENT
fullhyd.com has 700,000+ monthly visits. Tell Hyderabad what you feel about The Lord Of The Rings: The Fellowship Of The Ring!
MORE MOVIES
Latest Reviews
Jayeshbhai Jordaar
Sarkaru Vaari Paata
Doctor Strange In The Multiv...
Ashoka Vanamlo Arjuna Kalyan...
Runway 34
more
Heropanti 2
Acharya
Kanmani Rambo Khatija
Jersey (Hindi)
K.G.F. Chapter 2
Beast (Telugu)
Ghani
Fantastic Beasts: The Secret...
The Contractor
The Lost City
Contemporary Reviews
The Guru
Vajra
Abhimanyu
Jai
Jo Bole So Nihaal
more
Suno Sasurji
Mission Mumbai
The Lord Of The Rings: The T...
Gangaajal
Gayab
Agni Pankh
Paap
Insaaf
Athade Oka Sainyam
Random Reviews
Soldier
Koi Mere Dil Mein Hai
Sexy Elke
Apna Sapna Money Money
Singh Is Kinng
more
2012
Mirapakaya
Jo Hum Chahein
David
Gravity
Pilla Nuvvu Leni Jeevitham
Airlift
Bareilly Ki Barfi
Dev (Tamil)
The Matrix Resurrections
SEARCH MOVIES
Dissatisfied with the results? Report a problem or error, or add a listing.
ADVERTISEMENT
SHOUTBOX!
{{todo.name}}
{{todo.date}}
[
ip{{todo.ip}}
]
{{ todo.summary }}... expand »
{{ todo.text }} « collapse
First  |  Prev  |   1   2  3  {{current_page-1}}  {{current_page}}  {{current_page+1}}  {{last_page-2}}  {{last_page-1}}  {{last_page}}   |  Next  |  Last
{{todos[0].name}}