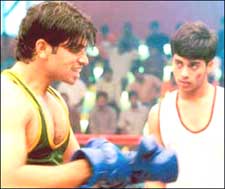 Mithun Verma / fullhyd.com
EDITOR RATING
5.0
Performances
Script
Music/Soundtrack
Visuals
NA
NA
NA
NA
Suggestions
Can watch again
NA
Good for kids
NA
Good for dates
NA
Wait for OTT
NA
Jai (Navadeep) is a sweet little rich guy who doesn't exactly love his life. First of all, every morning some 20 servants wake him up vigorously and ask him to drink either milk or fruit juice at once. How many times does he have to tell them that drinking in the mornings is not a good idea? Already your bladder is about to burst and then they offer you more liquids! How can any man control? That's why he rushes into the pool every morning without taking off his clothes.

Then, he gets back to telling us why he doesn't love his life. His mom (Ayesha Jhulka's pehela nasha with Telugu cinema) is always shuttling between countries for business deals. One day in Dubai, the next in Japan and so on. It is obvious that Jai is missing his mom. He wonders if they're treating her well in the asylum. Only people with acute mental problems would think that it's as easy to shuttle between countries as going from room to room. But she actually manages to do that.

Then, he actually reveals why he doesn't really love his life. The last two discoveries of director Teja, Uday Kiran and Nitin, have made it big in the industry. He is the third... damn the law of averages! He doesn't love his life one bit!

But someone who loves his life, and him, is Farrrrrrrrrrrrah (Santoshi). Farrrrrrrrrrrah is also a sweet little girl. Her sweetness is especially evident when she refrains from beating people with her shoes for obnoxiously stressing on the 'r' in her name. One person she can take care of, but an entire crew? She'd rather not waste her shoes.

Farah (the extra 'r's have been rented out to people screaming aarrrrrgh in the theatres at the relentless repetitive romance of the lead pair from Nuvvu Nenu) couldn't care less if Jai cannot fight well. She gives him her full support.

And with full support Jai does get into a small minority college in the middle of an academic year. Full support of his mother's financial backing, that is. He gets expelled from his old college, and this is the only other college that would give him admission. Being an underhanded college, here, Jai faces many disrupting elements of society - vague actors churning out scenes that neither have comic nor tragic value. He tries beating them up. But he gets beaten up himself. He remembers he's a new actor like them, too.

So he decides he's had enough of childish college fights. Actually, his mom decides that. Now she wants him to have childish fights with Lashker-e-Toiba. It so happens that an innocent business deal with the Pakistanis somehow turns into a full-fledged Paki-bashing, trash-talking movie. Totally confused, his mom decides to disappear for the rest of the movie.

Jai, however, has no such options. Even though the Pakistani boxer that challenged India is twice his size and completely muscular, he cannot disappear. He then remembers that he's got the full support of the heroine. Maybe he should ask her to fight. Physically, there wouldn't be much difference...

Being trained by old city dungal-pahalwaans does help him in the end. He really runs his mouth off and eventually beats the Paki guy.

Tanikella Bharani as Jai's boxing coach, Farah's dad and a typical Indian Muslim have given rousing performances. Navadeep is certainly better than what Uday and Nitin were in their firsts. And Santhoshi maintains the record of Teja of hiring some really talented heroines.

The music is decent. But in times when relations between India and Pak are getting better due to sport, this movie is a complete antithesis. Like always, Teja has left a lot of shoddily patched up holes in the movie. But this time I have a feeling people will not excuse all of those.
Share. Save. Connect.
Tweet
JAI SNAPSHOT

ADVERTISEMENT
This page was tagged for
?? ?????? ????
Jai (2004 Telugu film)
jairam tamil movie
JaiJaifullMovie
jai telugu full movie 2004
Follow @fullhyderabad
Follow fullhyd.com on
About Hyderabad
The Hyderabad Community
Improve fullhyd.com
More
Our Other Local Guides
Our other sites
© Copyright 1999-2009 LRR Technologies (Hyderabad), Pvt Ltd. All rights reserved. fullhyd, fullhyderabad, Welcome To The Neighbourhood are trademarks of LRR Technologies (Hyderabad) Pvt Ltd. The textual, graphic, audio and audiovisual material in this site is protected by copyright law. You may not copy, distribute, or use this material except as necessary for your personal, non-commercial use. Any trademarks are the properties of their respective owners. More on Hyderabad, India. Jobs in Hyderabad.