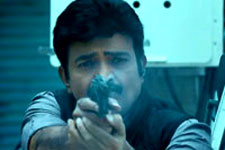 Josh / fullhyd.com
EDITOR RATING
8.0
Performances
Script
Music/Soundtrack
Visuals
7.0
8.0
7.0
8.0
Suggestions
Can watch again
Yes
Good for kids
No
Good for dates
Yes
Wait to rent it
No
Lack of ambition in a movie is easy terrain for the reviewer. After the sheer volume of ambitionless films one has to sit through, one evolves multi-pronged approaches to criticize that seem to materialise out of thin air.

While not that staple, ambition without function (a la Krishnam Vande Jagadgurum) is still common enough, and generally inspires some critical chastising begging the filmmaker to focus on the right things.

And then there are the few films with their ambition meeting function (like in Ghazi), and startled as we might be, we know to put in the good words and hope for the best.

But PSV Garuda Vega goes beyond. It's got ambition, all right. And it's more than functional. It's exciting! It's legitimately, categorically, any-validating-adverbally good. We confess we just weren't prepared for the combination of talent and conviction that is Praveen Sattaru.

Sattaru's crackling thriller begins with a hoodied guy (Arun Adith) in Darjeeling trying to make a shady deal with some confidential information he has on hand. Within minutes he's pursued by a gang on sports bikes in a chase sequence halfway through which we went through the emotions described in the previous paragraph.

Parallelly, far away in Hyderabad, Shekhar (Rajashekar) and Swathi (Pooja Kumar) are trying to mend their marriage which is under the strain of Shekhar's absurd work timings and the ludicrous stories he comes up with to maintain the confidentiality of his work at the National Investigative Agency.

With roughly the same serendipity that brought Siddharth Roy and Madhumati to the same temple in Khushi, Shekhar and hoodied guy land in a road incident whereon Shekhar gets hot on the trail of some really interesting mischief.

It is the lot of a thriller to be frequently illogical. Fundamentally, the very notion that a single man can go against a power structure and come out unscathed is laughable to say the least. PSV Garuda Vega has similar issues, too, with the climactic takedown being particularly ridiculous. But that's the thing - a good thriller isn't about its lack of flaws but its ability to keep you occupied enough to not worry about its flaws.

Praveen Sattaru gives enough to keep you occupied. There's the standard practice of showing close-ups in chase sequences to register the tension. However, unlike his peers, Sattaru doesn't use them as stand-ins for a well-choreographed sequence. All three chases keep you on the edge of your seat. The marriage counsellor (Ali draws his chuckles) scene is comic enough, but it also serves as a proper introduction to Shekhar's profession. Sattaru packs his two hours with material that is enjoyable or needs processing or, happily, both.

Rajashekar is a bit of a blessing for the film. That he doesn't have a rabid fan base lets him get to business without a lousy intro song and saves him the trouble of a dozen narrative-hampering low angle shots and makes it perfectly all right when the film ends with calling its protagonist an ordinary man. Which is what gives a touch of satisfying heroism when his character, a very unassuming ordinary man, does something extraordinary.

The rest of the cast (Arun Adith, Pooja Kumar, Kannada Kishore, and Nasser) and team ably support their director. Arun Adith, in particular, is very comfortable with the camera. However, we're yet to understand why Sunny Leone gets item song after item song when Malaika Arora's ring toe has better jhatkas in it than all of Ms. Leone's item songs.

Never mind its flaws - with a sturdy yet grounded hero, close to zero bloat, densely packed action and consistently exciting narration, PSV Garuda Vega is like a unicorn in the dying woods of Telugu cinema.
Share. Save. Connect.
Tweet
PSV GARUDA VEGA SNAPSHOT 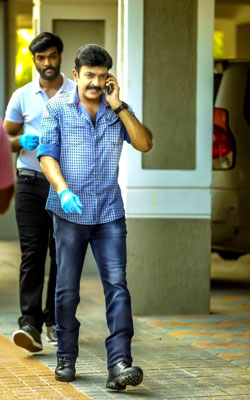 See PSV Garuda Vega full details
PSV GARUDA VEGA USER REVIEWS
1 - 4 OF 4 COMMENTS
POSITIVE  |  NEGATIVE |  NEWEST  |  OLDEST  |  MOST HELPFUL  |  LEAST HELPFUL
JT on 20th Feb 2018, 9:37am | Permalink
Just another pointless movie... lacking in story, direction and comedy. The plot is a joke.
Raghu M on 13th Nov 2017, 12:46am | Permalink
Watched it yesterday, with someone who knew little about this movie. When the item song began:

That unnecessary stuff apart, the movie was unbelievable edge-of-the-seat thriller! Not sure if I blinked even once until the intermission. Only then I realized my bladder was full and when I set out to rush to restrooms, the screening resumed (these days US theaters don't leave anytime for intermission), and I preferred to 'hold' rather than missing a few minutes. Well, post-intermission, it's different.. perhaps not worth 'holding'.
Raghu M on 13th Nov 2017, 12:53am | Permalink
Looks like fullhyd, like many Telugu people, didn't understand the Telugu letters I had typed (and thus all ?? mark faces)

ADVERTISEMENT
This page was tagged for
psv garuda vega movie
movie rulz psv garuda vega
psv garuda vega telugu songs
movierulz garuda vega telugu full movie
psv garuda vega full movie in telugu
Follow @fullhyderabad
Follow fullhyd.com on
About Hyderabad
The Hyderabad Community
Improve fullhyd.com
More
Our Other Local Guides
Our other sites
© Copyright 1999-2009 LRR Technologies (Hyderabad), Pvt Ltd. All rights reserved. fullhyd, fullhyderabad, Welcome To The Neighbourhood are trademarks of LRR Technologies (Hyderabad) Pvt Ltd. The textual, graphic, audio and audiovisual material in this site is protected by copyright law. You may not copy, distribute, or use this material except as necessary for your personal, non-commercial use. Any trademarks are the properties of their respective owners. More on Hyderabad, India. Jobs in Hyderabad.