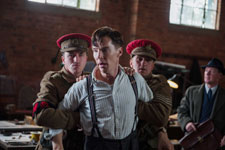 Kritika Deval / fullhyd.com
EDITOR RATING
7.5
Performances
Script
Music/Soundtrack
Visuals
9.0
7.0
8.0
9.0
Suggestions
Can watch again
Yes
Good for kids
No
Good for dates
No
Wait for OTT
No
Great men generally lead turbulent lives. The very ingredients of their eminence stand as barriers to something the rest of us take for granted - life as usual. But then, as those who get more than their share of "normalcy", we, the audience, are drawn to exactly these departures from a state of normalcy that these tragic heroes too crave but cannot achieve by virtue of their very natures. We derive vicarious enjoyment from gratuitous portrayals of their troubles and toils. We laud them and fete them, and turn them into icons until they bear little resemblance to the socially cooperative creature that is the homo sapien, because while achievements rarely happen in isolation, cooperation doesn't make for good hero material.

Morten Tyldum's biopic on the life of Alan Turing (Benedict Cumberbatch) is said to be wildly inaccurate, with half the Wikipedia entry on the film devoted to the various liberties taken with the life and times of a man who almost single-handedly changed the direction of scientific inquiry. None of that matters, though, because what Tyldum gets, and masterfully exploits, is the hero complex that even the best of us possess. From the word go, Benedict Cumberbatch's Turing captivates the imagination and, curiously enough for one who's supposed to be a socially crippled, irascible genius, the heart. The latter is solely due to Cumberbatch's deep knowledge of his role and the surety he endows his character's vulnerabilities with.

The story begins with a visit from the police to Turing's house in response to a neighbor's report of a commotion in Turing's house. While Turing's behavior puts the detective (Rory Kinnear) on his guard, the scientist nevertheless manages to brush him off. The screen then shifts to Turing trying to convince Cdr. Denniston (Charles Dance) that the team of cryptographers assembled to break "unbreakable" codes generated by a machine called Enigma needs him more than he needs them. Now, since there isn't much difference between Cumberbatch's appearance in the two scenes, it might take close attention to information periodically printed on the screen to be able to tell that the former scene happens in the 1950s, while the latter occurs earlier, during the late '30s when German Nazis were using the aforementioned Enigma machine to organise vicious attacks on the Allies.

A third, and final, time-line introduces us to Alan Turing in his boyhood, showing us the person he would become, and how he discovers his passion for codes as well as his homosexuality at the same time. While most of the film occurs in the timeline of the WW II, the flashes of the naissance of the mathematician's life go a long way to giving Cumberbathch's character the emotional resonance that he makes such good use of.

Keira Knightley plays Joan Clarke, a colleague and, briefly, Turing's fiancé. While Knightley has a history of bestowing her gorgeous face on characters who are known to be plain, she is so utterly charming and engrossing, adding a touch of gravity to a role that was essentially meant to be a placeholder for the "intelligent and spirited" woman, that you don't much care. Also, any face that shares so much screen-time with that of Benedict Cumberbatch had better be beautiful, in lieu of fading into the background. In fact Knightley shares a chemistry with Cumberbatch's witty, irascible, vulnerable Turing that is unsurpassed in the film, with Cumberbatch's rapport with Matthew Goode, yet another gorgeous actor who plays another of Turing's colleagues to admiration, coming a close second.

All the other members of the cast give great performances as well, but only Cumberbatch, Knightley and Goode manage to rise above the limitations placed on their roles by a director who seems eminently skilled in the highs and lows of a dramatic screenplay, but is determined to reduce Turing's life to the contents of his Wikipedia page.

For instance, while you see when and where Turing begins to dabble in what would later become his passion, cryptology, the why of it all is tantalizingly out of reach. You are shown all of Turing's breakthroughs, but, despite all the movies in the recent times that take great pains in translating esoteric science into layspeak, barely any attempt at all is made at explaining what exactly goes on in Hut 8, the top secret team's office and the site of the Genesis of what is now known as the Turing machine. Also a mystery is a certain naval officer's virulent hatred of Turing.

Despite all of this, The Imitation Game is as eminently watchable as it is, in its inimitable way, inspirational. The ever-so-slightly confusing screenplay is nevertheless one of the most beautifully constructed you are likely to see this year, adorned with period detail to satisfy the most obsessive of Anglophiles, and cinematography that shifts and slides alongside the moods of the film.

The Imitation Game is exactly what it seems, a gratuitous aspirant to the Academy Awards that is not above taking advantage of a hero's angst-ridden life. For all of its emotional exploitation, it deserves all eight of its Oscar nominations by virtue of the fact that all of the people involved in its creation are very, very good at what they do, hence making its flaws apparent only after you are out of the theatre, when you have the time to think.
Share. Save. Connect.
Tweet
THE IMITATION GAME SNAPSHOT 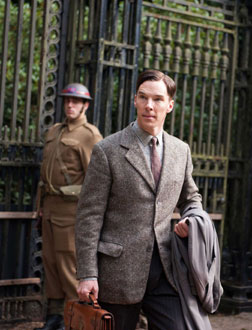 ADVERTISEMENT
This page was tagged for
The Imitation Game english movie
The Imitation Game reviews
release date
Benedict Cumberbatch, Keira Knightley
theatres list
Follow @fullhyderabad
Follow fullhyd.com on
About Hyderabad
The Hyderabad Community
Improve fullhyd.com
More
Our Other Local Guides
Our other sites
© Copyright 1999-2009 LRR Technologies (Hyderabad), Pvt Ltd. All rights reserved. fullhyd, fullhyderabad, Welcome To The Neighbourhood are trademarks of LRR Technologies (Hyderabad) Pvt Ltd. The textual, graphic, audio and audiovisual material in this site is protected by copyright law. You may not copy, distribute, or use this material except as necessary for your personal, non-commercial use. Any trademarks are the properties of their respective owners. More on Hyderabad, India. Jobs in Hyderabad.