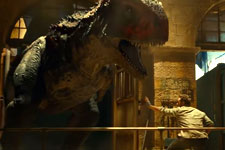 Punarvasu Pendse / fullhyd.com
EDITOR RATING
5.0
Performances
Script
Music/Soundtrack
Visuals
6.0
3.0
6.0
7.0
Suggestions
Can watch again
No
Good for kids
Yes
Good for dates
Yes
Wait for OTT
No
Jurassic Park, and subsequently Jurassic World, is a franchise that seems to have overstayed its welcome. Jurassic World Dominion, specifically, is the most lacklustre tentpole we've experienced in a while - the movie is formulaic to a tee.

Director Colin Trevorrow returns to direct the third film in the second series based on Michael Crichton's Jurassic Park novels, making it the sixth overall film in the franchise that was originally popularised by director Steven Spielberg.

A few years after the events at Isla Nubar, Owen Grady (Chris Pratt) and Claire Dearing (Bryce Dallas Howard) live together with Benjamin Lockwood's cloned granddaughter Maisie (Isabella Sermon) in a remote cabin in the woods. Now a teenager, Maisie is frustrated with the isolation of the cabin, and ventures out despite being warned about it. Dr. Ellie Sattler (Laura Dern) teams up with Dr. Alan Grant (Sam Neill) to learn more about swarms of mysterious locusts that are exhibiting some peculiar behaviour.

All these things lead to Biosyn, a bio-engineering company that aims to research dinosaurs to understand more about human evolution. At Biosyn, we run into the usual suspects - Dr. Ian Malcolm (Jeff Goldblum) and Dr. Henry Wu (BD Wong). As things become clearer for the ragtag group of adventurers who dive deep into dinosaur territory, they also become more dangerous. Along the way, they encounter a variety of dinosaurs including a quetzalcoatlus, a therizinosaurus, pyroraptors, a trio of dilophosauruses, a giganotosaurus, and, of course, a tyrannosaurus rex.

Jurassic World Dominion tries to tap into the nostalgia factor that its series predecessors did, but it seems to be overdone at this point. When Jurassic World dropped in 2015, it was a delightful moment for people who grew up with Spielberg's Jurassic Park in the '90s. Then came a sequel, and the appetite for a third film appears to be jaded at this point. That's not to say it is an unwatchable movie - far from it, it is a formulaic entertainer designed to make money for the studio while providing paisa vasool masala for the masses. There are plenty of dinosaurs, plenty of action, and a bunch of drama - but please do not go in expecting an intricate plot.

As dinosaurs are now out in the open world, we can see them stuffed into every situation, and they're astutely used as both sympathy fodder and the big bad. Dinos seem to emote better than ever before, but that is about it for nuance - everything else is in-your-face. And then there's the plot, which is almost certainly an afterthought. Despite Jurassic World Dominion being straight-forward enough for you to be able to predict every chase and action sequence, you still feel a disconnect due to what feel like random scenes stitched together haphazardly. You also get the same message that you got from its predecessor Jurassic World: Fallen Kingdom - humans need to adapt, and need to learn how to live together with dinosaurs without giving in to greed. Why make another film just to repeat that, eh?

Chris Pratt and Bryce Dallas Howard are likable enough, as is their "'daughter" Isabella Sermon. Laura Dern and Sam Neill are thrown together and it is supposed to reignite sparks, but it all blows hot and cold. With a huge supporting cast, including the likes of Jeff Goldblum, there is no dearth of talent in the offering - but it is all wasted on such a wafer-thin plot. The real stars are the dinosaurs because, let's face it, most people want to watch them stomp around on the big screen. And said dinosaurs are certainly not lacking.

For a long running and much loved franchise to end on this note feels a bit of a letdown. Actually, scratch that - we hope the makers of Jurassic World Dominion don't get any ideas for more films. It is time to let the series rest. 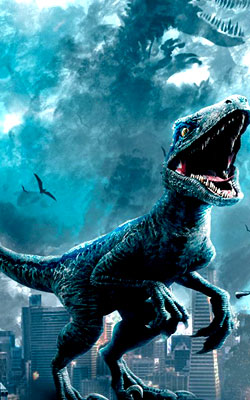 ADVERTISEMENT
This page was tagged for
Jurassic World: Dominion (Hindi) hindi movie
Jurassic World: Dominion (Hindi) reviews
release date
Chris Pratt, Bryce Dallas Howard
theatres list
Follow @fullhyderabad
Follow fullhyd.com on
About Hyderabad
The Hyderabad Community
Improve fullhyd.com
More
Our Other Local Guides
Our other sites
© Copyright 1999-2009 LRR Technologies (Hyderabad), Pvt Ltd. All rights reserved. fullhyd, fullhyderabad, Welcome To The Neighbourhood are trademarks of LRR Technologies (Hyderabad) Pvt Ltd. The textual, graphic, audio and audiovisual material in this site is protected by copyright law. You may not copy, distribute, or use this material except as necessary for your personal, non-commercial use. Any trademarks are the properties of their respective owners. More on Hyderabad, India. Jobs in Hyderabad.