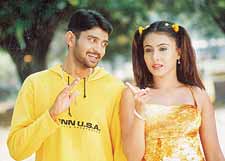 Boyfriends are like bank accounts - without much money, they don't generate much interest. Since the 'boyfriends' in Girlfriend are at ground zero financial state, you can guesstimate the levels of interest they would evoke from their respective girlfriends... and the audiences.

Girlfriend is a pukka Telugu movie - your regular gen-X leching at girls, a little bit of lecturing from clones who double up as professors, love affairs etc. However, we've got to give the devil its due. Girlfriend is also daringly different in more ways than one. 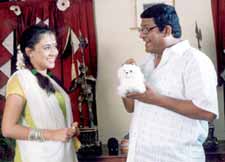 For starters, it has one helluva novel English title... and then, a tremendous tagline to boot - "Intention of youth" (???). Instead of Hero Hondas, here we have Hero cycles. And the heroes here are a bunch of losers.

Tall, fair, slim, with a dainty gait and an enviable waistline is Vamsi (Rohit). Filled out, well-built and with athletic muscles is Suvarna (Anita Patel, not to be confused with the Nuvvu Nenu girl). In order to avoid confusion about which the guy is and which the girl, Vamsi is allowed to sport a scraggly beard. So now you can focus on the story.

Vamsi is hanging out with his two bumchums, and in precisely 4 microseconds khambaqt ishq happens to him as Suvarna walks by. It's astounding that this loser who scores zilch in his progress card and is treated like a dead cockroach at home still has something to lose - his heart. 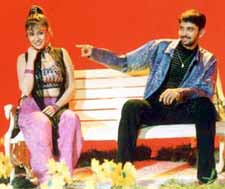 Precisely three dream sequences later, she agrees to French kiss him. After some more intimate encounters, their elders get a whiff of their love. They decide to teach the two a lesson - yippee yea kahani mein twist - and get them married. However, the guy gets to live with his girl only when he can stand on his own feet, earning money for everything from toothpaste to tortoise coil.

The three self-respecting losers challenge their respective parents that they shall prove their worth. After selling teddy bears on Necklace Road and cotswool socks at Ameerpet on a weekend, and one impromptu dance number on the road later, the three are offered a fabulous item number in a hit Telugu movie. The producer offers them a blank cheque, and the rest is history. Parents realize the guys worth, tra-la-la and end of story. 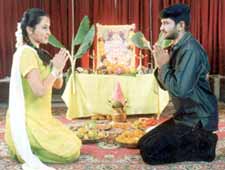 Rohit looks perfectly like a loser, thereby fitting his role to the T. He also looks anemic, which helps him gyrate effortlessly to those fast-paced folksy numbers composed by Vandemataram Srinivas. Anita Patel looks and acts so dumb, she can give a cow a complex. But then, how else would you expect the girlfriend of a dumb boyfriend to be?

The comedy track is pretty wacky, and the movie is a breezy one. But it's a case of one movie too many on the same genre. This is perhaps the 143,267,178th movie of its genre after Nuvve Kaavaali.

ADVERTISEMENT
This page was tagged for
girlfriend telugu movie
telugugf
telugu girlfriend movie images
girlfriend movie details telugu
telugu girlfriends telugu
Follow @fullhyderabad
Follow fullhyd.com on
About Hyderabad
The Hyderabad Community
Improve fullhyd.com
More
Our Other Local Guides
Our other sites
© Copyright 1999-2009 LRR Technologies (Hyderabad), Pvt Ltd. All rights reserved. fullhyd, fullhyderabad, Welcome To The Neighbourhood are trademarks of LRR Technologies (Hyderabad) Pvt Ltd. The textual, graphic, audio and audiovisual material in this site is protected by copyright law. You may not copy, distribute, or use this material except as necessary for your personal, non-commercial use. Any trademarks are the properties of their respective owners. More on Hyderabad, India. Jobs in Hyderabad.