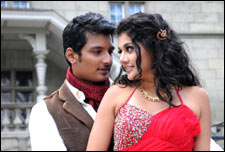 Harika Vankadara / fullhyd.com
EDITOR RATING
3.5
Performances
Script
Music/Soundtrack
Visuals
5.0
2.0
4.0
7.0
Suggestions
Can watch again
No
Good for kids
No
Good for dates
No
Wait to rent it
Yes
The human psyche is a kaleidoscope of emotions. It takes a genius to render a high resolution painting of the medley, and R Kannan, the director of Vachadu Gelichadu, is not one. Vachadu Gelichadu fails to fill out the silhouettes of the personalities it introduces, thereby becoming one among the plethora of reels that are destined to be forgotten forever.

Watching Vachadu Gelichadu is like living with a person suffering from dementia on little medication - it has spells of sensibility, interspersed with general hodge-podge. Just as you appreciate the pearls of wisdom from a particular character, the next character shatters the mood of novelty with lines that elicit groans from the audience.

The movie revolves around 2 step-brothers, Arjun and Ramana (Nanda). Ramana loses his perpetually intoxicated father at a very young age, and his mother remarries and begets Arjun. Though treated equally by his step-father, Ramana is convinced that the world is against him and that he is the recipient of everyone's hatred.

Fueled by a scarring incident that he brought on himself, Ramana throws Arjun into a well and flees his village.

The film then takes its audience to Mumbai, where Ramana reigns as a don with a wide range of legal and illegal businesses. A predictable sequence of events has Arjun (Jiiva of Rangam fame) securing an appointment with Ramana to narrate his love story to the latter - a story that is anybody's guess.

The flashback is the standard bland broth of boy meets girl, girl makes pretty faces, boy falls for girl, girl plays hard-to-get, boy perseveres. Arjun is shown to be a boxer who aspires to represent his nation at platforms like the Commonwealth Games, and yet throws away the opportunity to do this to help a total stranger Anjana (Tapsee) fulfill her dream of getting a job as an architect. The few minutes of the flash-back is the only time that either of them refer to their life's professional ambitions, as love conquers all during the course of the movie.

The link between the past and the present in the film is flimsy. The flaws in the plot seem to be justified by a final twist in the story, but not completely so.

The film tries to shed light on a number of unpleasant truths - the murky lanes of politics, the infiltration of corruption into every level of governance, and the startling ways in which minds work - and seems to want to focus on the purgatory effects of love. It tries telling us that a person's perspective can be changed with the selfless love of a dear one, but the execution of this concept falls short of expectations, and the novelty is overshadowed by the many inconsequential parts of the movie.

Jiiva, Tapsee and Nandha all perform well, but their characters restrict them. The actors are all in good form, and the costume designers did a commendable job.

The songs are acceptable for a one-time deal. The film does manage to tickle its audience a couple of times, but not enough to bring them back to a cinema hall to watch the movie a second time.

Vachadu Gelichadu is a film that can be one of the 3 that you simultaneously watch on TV on a lazy Sunday noon.
Share. Save. Connect.
Tweet
VACHADU GELICHADU SNAPSHOT

ADVERTISEMENT
This page was tagged for
vachadu gelichadu movie in telugu
vachadu gelichadu telugu movie
Vachadu Gelichadu telugu movie
Vachadu Gelichadu reviews
release date
Follow @fullhyderabad
Follow fullhyd.com on
About Hyderabad
The Hyderabad Community
Improve fullhyd.com
More
Our Other Local Guides
Our other sites
© Copyright 1999-2009 LRR Technologies (Hyderabad), Pvt Ltd. All rights reserved. fullhyd, fullhyderabad, Welcome To The Neighbourhood are trademarks of LRR Technologies (Hyderabad) Pvt Ltd. The textual, graphic, audio and audiovisual material in this site is protected by copyright law. You may not copy, distribute, or use this material except as necessary for your personal, non-commercial use. Any trademarks are the properties of their respective owners. More on Hyderabad, India. Jobs in Hyderabad.