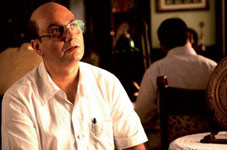 Nupur Barua / fullhyd.com
EDITOR RATING
6.0
Performances
Script
Music/Soundtrack
Visuals
7.0
5.0
6.0
6.0
Suggestions
Can watch again
No
Good for kids
No
Good for dates
No
Wait to rent it
No
The "Das"taan in the title of this one is a clever play on the name of its protagonist - Gour Hari Das. The film is the story of (mostly) 32 years of his life, in which he fought for his identity with the very people whose authority he had helped create. Directed by Ananth (Narayan) Mahadevan, who thought a biopic was important to underline how our country has gone from bad to worse, Gour Hari Dastaan is an apt movie for this Independence weekend.

Based on a true story, Gour Hari Dastaan follows the trials and tribulations that one man has to face to prove his worth to the nation at large, and to his immediate world in particular. It all begins with his son asking him to provide some documented proof that Hari was, as he has always claimed, a freedom fighter in British India. The son wants to enrol in a technical institute in Mumbai, where the Das family now resides, and he has been told that preference (for admission) is given to freedom fighters and their families.

Hari does not have a certificate, or any other acceptable document, to give credence to his tales of the time when India was united against the British reign. All he has is a slip that states he was jailed at some point during the struggle for Independence, but, as everybody is quick to point out, even a criminal has that.

Hari's sentiments are hurt when he realises that people think he is a liar. After all, he is a true Gandhian, with honesty as his middle name. He turns to lawyer Mohan Joshi (Rajit Kapoor) for help.

Thus begins the second round of his struggle for freedom, as he knocks on numerous doors to validate his contribution to the country. Obstinate and indignant, Hari refuses to fall prey to touts and anti-social elements who promise him results as long as he pays bribes, and instead, insists on following protocol to get his job done.

This takes him 32 years, thanks to bureaucratic red tape, during which time people begin to doubt his sanity. His wife, Lakshmi (Konkona Sen Sharma), however, stands by him firmly, even when she loses patience. And a journalist named Shankar (Ranvir Shorey) offers him moral and vocal support.

Ananth Mahadevan has a point - this is a story worth telling for various reasons, the most important one being our inability to appreciate the people who made it possible for us to flaunt our views so openly. It is a relevant topic, even though Hari is now in his mid-80s, and not many have heard of him. The screenplay attempts to be a wake-up call pointing to our own callousness and mediocrity, and the futility of the lives of better men.

What is missing, however, is the emotional connect that a story like this would ideally have with its audience. Sure, there are many tear-jerker moments, and plenty of sympathetic evocations, but, given that it is a true story, the depiction of the essence of Hari's life falls flat on its face with the melodrama inserted in the script. Obvious creative licences that have been included in the screenplay make the narrative somewhat less credible.

Which is a pity, because the film is written by renowned journalist C P Surendran (with inputs from Anant Mahadevan). In fact, in a first, the producers released the screenplay a few days before the film hit the theatres. A blatant publicity move or otherwise, this event gave interested audiences a chance to read up on the story of Hari before watching the movie. It makes sense to know the background of a person before watching his life unfold before you on a screen, we think.

Sure, the execution of the written word is not always easy, which may explain the numerous dull sequences in the movie. Gour Hari Dastaan, despite its philosophy and its essential lessons, is a difficult watch. However, the music by Dr L Subramaniam lends a distinct flavour and emotion to the visuals, and lifts the narrative a few notches.

Nothing however can take away from the awesomeness that Vinay Pathak displays as the main character. The man is a wonder to watch. He overshadows almost everybody in the film. Ranvir Shorey, who plays a rather loud and cynical scribe, is irritating at times, and his misogynistic character is most unlikeable. Konkona Sen Sharma underplays her role, but she is hard to ignore. Rajit Kapoor is delightful. The list of cast members is extensive, and includes cameos by veteran actors such as Asrani, Vikram Gokhale and Viju Khote - all of them are sincere in their efforts to make the story of Gour Hari Das a memorable one.

Despite the slow pace and the repetitive themes, Gour Hari Dastaan has its heart in the right place. The story of this stubborn man is not the stuff of superheroes, but it deserves our attention, especially since we are poised on the brink of a new decade of Independence. It's easy to see this movie (re-edited, ideally) becoming a regular feature on television channels every year during Independence Day.
Share. Save. Connect.
Tweet
GOUR HARI DASTAAN -... SNAPSHOT
GOUR HARI DASTAAN - THE FREEDOM FILE SNAPSHOT 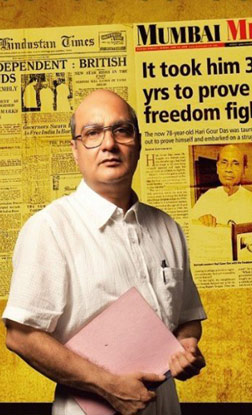 ADVERTISEMENT
This page was tagged for
Gour Hari Dastaan - The Freedom File hindi movie
Gour Hari Dastaan - The Freedom File reviews
release date
Vinay Pathak, Konkona Sen Sharma
theatres list
Follow @fullhyderabad
Follow fullhyd.com on
About Hyderabad
The Hyderabad Community
Improve fullhyd.com
More
Our Other Local Guides
Our other sites
© Copyright 1999-2009 LRR Technologies (Hyderabad), Pvt Ltd. All rights reserved. fullhyd, fullhyderabad, Welcome To The Neighbourhood are trademarks of LRR Technologies (Hyderabad) Pvt Ltd. The textual, graphic, audio and audiovisual material in this site is protected by copyright law. You may not copy, distribute, or use this material except as necessary for your personal, non-commercial use. Any trademarks are the properties of their respective owners. More on Hyderabad, India. Jobs in Hyderabad.