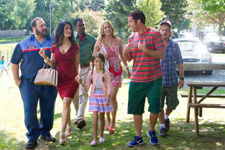 Nupur Barua / fullhyd.com
EDITOR RATING
3.0
Performances
Script
Music/Soundtrack
Visuals
5.0
3.0
4.0
4.0
Suggestions
Can watch again
No
Good for kids
No
Good for dates
No
Wait to rent it
No
The wonder of a franchise is this - no matter how trashy the original movie is, if the makers are hell bent on making a sequel, no power on earth can stop them. Especially when one of the producers is the always-panned-by-critics Adam Sandler, whose brand of humour has found as many takers as Aftab Shivdasani's. The amazing fact remains that he manages to rope in big stars and bigger budgets to prove his point, every single time.

After Grown Ups, and all the events that led to the group of friends self-indulgently patting itself on its back for whatever it had achieved, Lenny (Adam Sandler) relocates to Connecticut. This is an effort to revisit his roots and to bring up his kids in a more grounded environment.

Needless to say, his childhood friends, who also grew up here, are now situated in the same area. Their lives follow a simple routine, and all of them are happy in their respective houses, despite a few complications here and there.

Lenny's wife Roxanne (Salma Hayek) wants another kid, and also wants her husband to encourage the children to speak their minds - a prerequisite to hilarity. Of course, the underlying theme is that the adults are actually children (in their hearts), and that actual children possess wisdom beyond their years. With that firmly etched in the minds of characters, the makers, the writers (including the multi-faceted Adam Sandler himself, no less) and, of course, the audience, who is stupid enough to pay for the movie, the friends indulge in meaningless comedic pranks and activities, with each juvenile act leading to another.

Just when they think that they have found a way around being brain dead in the small town that they now live in, their masculinity is challenged by a few adolescent young men, led by Frat Boy Andy (Taylor Lautner).

The rest of the movie then delves into many bottomless pits posing as plot points. At the end of it all, a few lessons in life are learnt, especially by the audience (the wiser ones will never again pay for an Adam Sandler movie). The screenplay is non-existent, and everything falls in place once the men have stopped lying, leering, lazing and lolling.

Ultimately, the kids teach them how easy it actually is to be parents, especially when the former are allowed to do whatever they want and have not yet developed into the sociopaths that they will inevitably become (you can almost smell a third instalment of the movie at this stage). Slapstick is an overstatement in the dialogues and action, complete with gags on homosexuality, promiscuity, infidelity, irresponsibility - you get the drift.

The less said about Adam Sandler, the better. His annoying, whining voice is not endearing (somebody tell him that), and he is anything but funny.

One wonders why Salma Hayek is so desperate for a role in this movie, but the most awkward actor is Steve Buscemi, who must have signed up for this before he became a household name with the series Boardwalk Empire (fans of the man, be prepared to wince).

Chris Rock, Kevin James and David Spade are obviously paid a lot of money to fool around, and Taylor Lautner, too, needs a job after the Twilight series (or maybe he is just inserted in the movie to attract teen fan girls). To give him his due credit, he is the only actor who's even trying to do his job.

And there is nothing to add as far as production design and costume are concerned. Most of the visuals are too disjointed for you to pay too much attention to the technicalities. The music is sub-standard. The cinematography is lazy. And the colours are jarring.

Adam Sandler fooled you once into believing that he could make a funny movie about friends and kids with Grown Ups. The sequel makes the original look like a cult classic. There will always be takers for any movie that doles out so much below-mediocre fare, but you do not have to fall for it. It is time for the makers of this movie to retire, after they have laughed all the way to the bank. Watch at your own risk.
Share. Save. Connect.
Tweet
GROWN UPS 2 SNAPSHOT 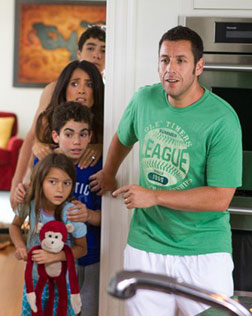 ADVERTISEMENT
This page was tagged for
Grown Ups 2 english movie
Grown Ups 2 reviews
release date
Adam Sandler, Kevin James
theatres list
Follow @fullhyderabad
Follow fullhyd.com on
About Hyderabad
The Hyderabad Community
Improve fullhyd.com
More
Our Other Local Guides
Our other sites
© Copyright 1999-2009 LRR Technologies (Hyderabad), Pvt Ltd. All rights reserved. fullhyd, fullhyderabad, Welcome To The Neighbourhood are trademarks of LRR Technologies (Hyderabad) Pvt Ltd. The textual, graphic, audio and audiovisual material in this site is protected by copyright law. You may not copy, distribute, or use this material except as necessary for your personal, non-commercial use. Any trademarks are the properties of their respective owners. More on Hyderabad, India. Jobs in Hyderabad.