Deepa Garimella / fullhyd.com
EDITOR RATING
5.0
Performances
Script
Music/Soundtrack
Visuals
7.0
3.0
5.0
7.0
Suggestions
Can watch again
No
Good for kids
No
Good for dates
Yes
Wait to rent it
Yes
Ragava Larencce (which is what he is calling himself now) clearly likes to have fun. This is written all over his latest film, which is a noisy, mad, colourful, splashy, exuberant show of several of his talents - writing, screenplay, direction, choreography and music. The question is whether you want to join in all the brouhaha or politely watch from a distance.

Rebel is a standard-issue actioner that is totally unapologetic about what it is. Which is a good thing for a while. It invites you, like a bunch of boisterous youngsters at a wedding who drag shy uncles and aunties into their dance. But slowly, you catch on. This is more painful and haphazard than you initially thought.

It all starts off with Rishi (Prabhas) looking for a certain Stephen Roberts. Stephen Roberts is a deadly goon whose identity is kept so secret that anyone who even asks for him is shot dead. However, Rishi, after bashing up some people who are part of this ubiquitous gang, learns that he must go to Bangkok for clues about his target. He is told that in Bangkok lives Nandini (Tamannah), the daughter of Stephen Roberts' close aide.

After our mandatory dose of Thai tourism, including a couple of songs, some tomfoolery involving Kovai Sarla teaching Brahmanandam how to dance, and a super-inane romance involving Tamannah's midriff, we are then taken back to India, where Rishi finally gets to know who Stephen Roberts is. After this, we are told who Rishi really is - the son of "maa voori devudu", Bhupathy (Krishnam Raju in an unrecognisably swanky avatar).

The movie starts out fun, despite clearly being a load of sheer nonsense. Logic is nowhere in sight, as exemplified by the fact that Lawrence makes his hero woo his heroine by slapping around his innocent sidekick (Brahmanandam). The humour is juvenile, and yet audiences lap it up - credit to this goes not to the writers, but to these dependable comedians who don't mind wearing silly clothes and act like they are four years old.

When the story changes gear, things get less funny and exceptionally predictable. Rishi has a flashback that involves Deeksha Seth, a bunch of cowardly astrologers, and an effeminate dance teacher played by Ali (evidently, this bit never gets old). By the time Stephen Roberts' identity is revealed you are so unconcerned that you probably even miss it. And believe us - it won't matter.

Lawrence loves flamboyance - in the oomph he gives his leading lady (Tamannah), in the grandiose fights he engages Prabhas in, and in the over-the-top quality that he insists on bringing to every scene. And sometimes, he's in a quirky mood. There's a fight sequence in which the villains dress like women, and before beginning, go through the usual Tamil-style villain drill of hitching up their err... sarees.

However, overall, the result is a loud film with very little content. Meanwhile, some of the violence is graphic.

Rebel does not rely on performances as much as it does on star power. Prabhas looks great - better than he has looked in his last few films, although the wardrobe is still questionable - has the build and the confidence, and maybe his quality of acting suits the movie. But is he capable of bringing more to the table?

Deeksha Seth is in an unglamorous role, but Tamannah steals the show when she's around. She catwalks, tosses her mane around, swings her hip, shows off her navel and pouts, in all her starry glory. And all through this there's that spunk in her eyes that tell us that she herself is aware that she's destined for better things. Filmmakers, please note.

Krishnam Raju enjoys himself, and so do his fans, as he makes his entry beating up a rogue policeman. Supreeth is given a lot of dialogues, and does well. Brahmanandam, Kovai Sarla, M S Narayana and Ali are standard fixtures.

The songs are less than entertaining, and have a lot of "mass" value in them. The visuals are pretty good, meanwhile.

Watch Rebel if you insist, but we don't think it'll add much value to your day.
Share. Save. Connect.
Tweet
REBEL SNAPSHOT 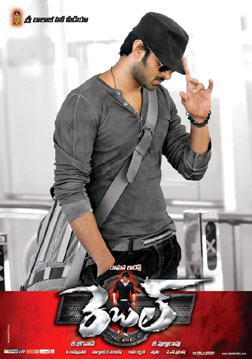 ADVERTISEMENT
This page was tagged for
Rebel telugu movie
Rebel reviews
release date
Prabhas, Tamannah
theatres list
Follow @fullhyderabad
Follow fullhyd.com on
About Hyderabad
The Hyderabad Community
Improve fullhyd.com
More
Our Other Local Guides
Our other sites
© Copyright 1999-2009 LRR Technologies (Hyderabad), Pvt Ltd. All rights reserved. fullhyd, fullhyderabad, Welcome To The Neighbourhood are trademarks of LRR Technologies (Hyderabad) Pvt Ltd. The textual, graphic, audio and audiovisual material in this site is protected by copyright law. You may not copy, distribute, or use this material except as necessary for your personal, non-commercial use. Any trademarks are the properties of their respective owners. More on Hyderabad, India. Jobs in Hyderabad.